NATIONAL burger chain Grill’d has backed down on its venture into offering only plant-based burgers in some outlets.

In February the company converted and re-branded two of its mainstream stores into plant-based only burger outlets, but quietly overturned the decision after a matter of weeks.

The stores in Crown St Darlinghurst (NSW) and Collingwood (VIC) were re-branded in shades of mint green (Grill’d signature colour is red) as ‘Impossibly Grill’d’, in a reference to its Impossible plant-based burger offering.

“Check out how our plant-based journey led us to going 100% vegetarian in two of our restaurants,” the Grill’d website proudly said at the time.

After renovating the two stores, ‘Impossibly Grill’d’ offered customers leafy-green interiors to complement their experience alongside other plant-based dishes available on the menu. 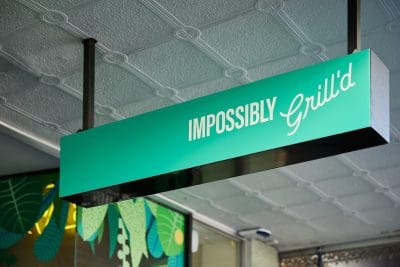 It was only after the decision to open the plant-based only restaurants was reversed that words like ‘trial’ and ‘temporary’ were used to describe the venture on the company website, or in public comment.

“We temporarily traded-in our pastures for garden beds at two of our restaurants by turning them into the totally vegetarian Impossibly Grill’d. And now, we’ve swapped them back to OG Grill’d restaurants,” the company said after the reversal.

“The Impossible Burgers we served at Impossibly Grill’d were juicy, meaty and satisfying. You can still find these in all our restaurants.”

While they briefly operated, the two Grill’d plant-based only restaurants carried an offering of 23 plant-based burgers and other plant-based options including new Grill’d Impossible burgers, complete with a range of salads and sides. The company proudly proclaimed the burgers as ‘guilt-free.’

“We had a lot of fun going meat-free, and although we had many MF (meat-free) fans, we’ve swapped back to grilling all our OGs, with heaps of intel on how we’ll build tastier, healthier meat-free burgers in the future,” to company said after the decision was reversed. 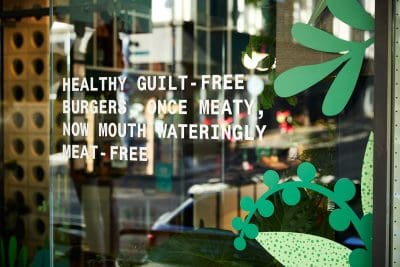 At much the same time as the two meat-free restaurants were opened in February, Grill’d also re-introduced its “Meat-free Mondays” campaign across all its 142 Australian restaurants, initially launched in 2019 to encourage Australians to go meat-free for one day a week. The company continues to offer two-for-one plant based burgers on Mondays, to promote uptake.

By way of comparison, the current Grill’d menu includes the Simply Grill’d (grassfed beef or lamb pattie with cos lettuce, tomato, Spanish onion, relish & herbed mayo) for $11.90 and the Impossible Simply Grill’d (identical fillings, except for plant-based, ‘meat tasting’ Impossible pattie) for $14.50.

Established in Melbourne in 2004, Grill’d was the first Australian chain restaurant to offer Impossible burger patties. The company employs more than 4000 staff in Australia. The chain’s founder and managing director Simon Crowe in around 2018 announced his business would make 50 percent of its menu plant-based by 2020.

Founded in the US in 2011, the plant-based Impossible burger has run worldwide campaigns based on its “impossible to taste the difference” burger patties which it claims look, cook and taste like beef.