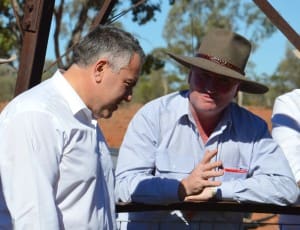 The Australian Government has released the Agricultural Competitiveness Green Paper this morning, and is asking everyone in agriculture to have their say on a range of new proposals and policy suggestions.

Minister for Agriculture, Barnaby Joyce, said that the Agricultural Competitiveness White Paper that the Coalition Government has carriage of, is seminal to who we are, where we came from, and is a vital part of the puzzle of how we get out of our current financial bind.

“The Green Paper outlines fresh ideas on a range of vitally important issues for the future of our nation including infrastructure, drought support, trade and finance,” Minister Joyce said.

“The Green Paper is a reflection of the Coalition Government’s commitment to maintaining family farming as the cornerstone of Australian agriculture and to support those on the land who engage in food and fibre production, an inherently noble and good occupation.

“People on the land feed and clothe people. You are on the land if you farm, if you work in an abattoir, if you transport produce in logistics, if you are a vet or a farm worker and if you are the family that owns the farm.

“I said I wanted to hear the big ideas, to shake things up—I was looking for new policies to truly support our farmers and our strong agricultural sector into the future. The Green Paper certainly delivers with options to consider on 25 diverse policy themes,” Minister Joyce said.

“Now it’s about whittling these ideas down and deciding what’s really important to take into the future, particularly given the tight fiscal environment we are working in.

“As a nation, we need a competitive and innovative agricultural sector—a sector that increases farmgate profitability, has expanded export and trade opportunities, and strengthens our rural and regional communities.

“In infrastructure, we want the views of producers on the costs and benefits of major investments ranging from road, rail and shipping terminals to regional air hubs, new dams, and communication services and programmes.

“Regarding water infrastructure, the government is seeking to identify new dam and infrastructure projects that can deliver Australia’s water supply needs in the future.

“Many of the submissions received through the issues paper consultations raised the need for greater investment in biosecurity information and intelligence gathering tools.

“In terms of taxation and finance, the government is also seeking input on proposals to amend income tax averaging provisions, alter non-commercial loss rules and change the eligibility boundaries for the Zone Tax Offset.

“We’re looking to farmers to tell us about the most important ideas and the policies we should focus on to take agriculture forward—so feedback will be very useful.

“Everyone has the opportunity to have their say on the Green Paper. Submissions are open online until 12 December 2014. Now is the time to help shape Australian agriculture into a stronger, more profitable and more sustainable sector,” Minister Joyce said.

To read the Green Paper, or provide a submission in response, visit: https://agriculturalcompetitiveness.dpmc.gov.au.