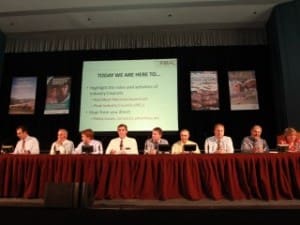 The Red Meat Advisory Council, which allows the red meat sector to speak with one voice when all commodity sectors agree (Pictured here at Longreach in November 2011), should be disbanded according to the Senate RRAT committee report.

The Red Meat Advisory Council would be dissolved and grassfed levies would be controlled and dispersed by a single producer-owned organisation under  recommendations tabled by the Senate Rural and Regional Affairs and Transport Committee just minutes ago.

Seven recommendations have been made by the committee following its inquiry into industry structures and systems governing levies on grassfed cattle, which involved seven public hearings around Australia and close to 200 written submissions.

The inquiry represented the first major independent review of all cattle industry industry levy and structural arrangements since a previous Senate Inquiry was held in 2002.

That inquiry concluded that the existing arrangements were not delivering maximum benefits to the Australian meat industry, but offered no detailed prescription for a better structure, and resulted in no action being taken by the then Howard Government.

Whether the recommendations of this inquiry will be adopted will effectively be up to agriculture minister Barnaby Joyce and the Federal Government.

If they are adopted, Meat & Livestock Australia and Cattle Council of Australia could expect to see some significant change.

The committee, led by WA Labor Senator Glenn Sterle, has recommended that all grassfed levies now flow to a single producer owned corporation.

However the committee has stopped short of recommending what role Cattle Council of Australia would play as part of that process.

The report says that while it is possible that the new body may be a reformed version of CCA, it is also possible that agreement is made to start from scratch with an entirely new entity.

Another recommendation calls for cattle transaction levies currently paid by processors to MLA to be regarded in future as slaughter levies, which would suggest they would no longer flow to MLA but to the Australian Meat Processor Corporation along with other slaughter levies instead.

The recommendation responds to the perceived level of influence some groups and producers expressed concern about during the Senate Inquiry that processors have over the producer service organisation MLA by virtue of the significant cattle transaction levies they pay in addition to slaughter levies. (Processors pay transaction levies on cattle they own and feed in their own feedlots which are then transacted to their abattoirs for processing).

The committee has recommended that the Department of Agriculture conduct an investigation into the costs, benefits and potential consequences of introducing mandatory price reporting legislation in Australia similar to the Packers and Stockyards Act 1921 in the US.

One Senator, Liberal Senator Ian McDonald, submitted a dissenting report opposing the recommendations for a new single producer owned body to control all levies and for RMAC to be disbanded.

The seven recommendations are listed below. Beef Central will provide in depth analysis and industry reaction in its daily news email tomorrow. To read the full report Grassfed inquiry report

The committee recommends that a producer-owned body be established by legislation. The body should have the authority to receive and disperse the research and development, as well as marketing component, of the cattle transaction levy funds. The producer-owned body should also be authorised to receive matching government research and development funds. Reforming the Cattle Council of Australia to achieve these outcomes should be examined as part of this process.

The committee recommends the establishment of a cost-effective, automated cattle transaction levy system. The system should identify levy payers against levies paid. The automated system should provide for more immediate settlement of levy fees paid and the allocation of voting entitlements. It should be subject to regular independent auditing and verification.

The committee recommends that the Primary Industries (Excise) Levies Act 1999 be amended to ensure that levies paid by processors are recognised as processor (or slaughter) levies and not as producer (or cattle transaction) levies.

The committee recommends that the Australian National Audit Office conduct an audit of the cattle transaction levy system, tracing the levy from inception and focusing on the revenue from, and expenditure of, the respective components of the levy.

The committee recommends that the Minister for Agriculture revoke the status of the MLA Donor Company as an approved donor under the Australian Meat and Live-stock Industry Act 1997.

The committee recommends that the Department of Agriculture, in consultation with the cattle industry, conduct an analysis of the benefits, costs and consequences of introducing legislation akin to the Packers and Stockyards Act 1921 and Livestock Mandatory Price Reporting Act 1999.