FOOD traceability in export markets will be the primary focus for a 2019 Australian Churchill Fellowship recipient.

Peter Carter, director of business development and innovation at GS1 Australia*, has been awarded a 2019 fellowship, under which he will investigate traceability for the modern supply chain to ensure export market access – one of the most pressing challenges for Australian primary industry. 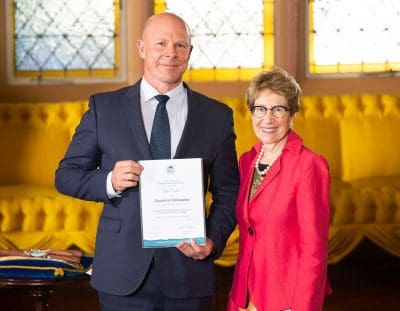 To support ongoing operations and achieve the National Farmers Federation goal of $100 billion worth of primary production in the next ten years, an increased awareness of methods and techniques for traceability and quality assurance in other parts of the world is necessary.

The consequences and costs for Australian industry are likely to be significant if compliance with importing country requirements are not met.

Mr Carter’s farming background and his passion for digital transformation of agricultural supply chains has led to his investigations. He is firmly focused on supporting Australian agriculture with enhanced national traceability through a better understanding of the best practices and capabilities being developed abroad.

Next year he will travel to Vietnam, China, Ireland, the United Kingdom, Belgium, Italy, Canada and the United States exploring commodities including red meat, eggs, milk, oranges, and wine. Visits with international producers and processors will provide a first-hand understanding of the measures and traceability processes that are in place, how effective they are, how markets are changing and what export market customers are expecting.

“Through the Fellowship, I hope to learn from others and intend to bring back techniques and methods used in other parts of the world to address challenges being faced by Australian industry. For example, a smart way of identifying eggs to enhance traceability and provide customers with confidence,” he said.

Mr Carter has already championed CSIRO and industry efforts to improve traceability and regulatory aspects to help make Australian industry more competitive. He has also been actively engaged with Federal Government agencies such as the Department of Agriculture and Water Resources, and industry bodies including Food Standards Australia New Zealand, to address national traceability challenges.

“When I return, I am looking forward to taking part in industry discussions and experimentation with new ideas identified through the investigation,” he said.

Mr Carter is one of 115 recipients from across the country who have this year received a prestigious Churchill Fellowship, worth some $3.35 million collectively.

“Being recognised as a Churchill Fellow is a celebration of curiosity. They are ordinary Australians with extraordinary abilities and aspirations,” said Adam Davey, CEO of the Churchill Trust.

GS1 is a neutral, not-for-profit organisation that develops and maintains the most widely used global standards for efficient business communication. We are best known for the barcode, named by the BBC as one of “the 50 things that made the world economy”. GS1 standards and services improve the efficiency, safety and visibility of supply chains across physical and digital channels in 25 sectors. With local Member Organisations in 114 countries, 1.5 million user companies and 6 billion transactions every day, GS1 standards create a common language that supports systems and processes across the globe. For more information on GS1 Traceability click here.

History of Churchill Fellowships and The Winston Churchill Memorial Trust

Just four weeks after the death of Sir Winston Churchill on 28 February 1965, the “Churchill Memorial Sunday” doorknock appeal was held across Australia. The doorknock was to raise funds for an unusual type of memorial to Sir Winston – something like Rhodes Scholarships, but more egalitarian, and available to all people and on a much wider basis.

The concept, endorsed by Churchill before he died, was Fellowships, bearing his name, for ordinary people – providing a unique opportunity to travel, learn, and bring knowledge back to their country.

Such was the admiration and respect that Australian fighting men and women of World War II held for Churchill, that this became the greatest one-day doorknock in Australian history. Funds collected from everyday Australians together with donations from Government and Australian companies totalled the princely sum of 2,206,000 Pounds ($4,412,000).

That laid the foundation for an incredible opportunity – Fellowships offered annually and worth on average $27,000 each, available to Australians who want to make a difference.

The Winston Churchill Memorial Trust was established to administer not only the total funds raised by the 1965 Appeal, but also the Churchill Fellowship award scheme. Since the inception of the Churchill Trust, more than 4400 Australians have identified projects where overseas research allowed them to bring back vital networks and skills.

To find out more about the Churchill Trust click here.