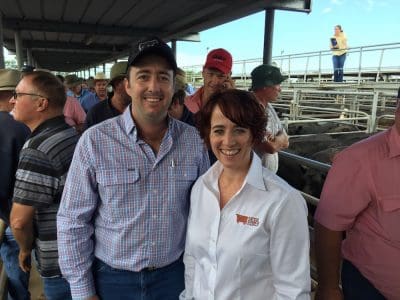 IT’S a big year ahead for beef.

In just a few months an expected 100,000 industry stakeholders and supporters will converge on Rockhampton for the three-yearly Beef Australia expo, a spectacular showcase of Australian beef industry innovation, ideas and issues.

Internationally Australia is on track to export another one million tonnes of beef this year, despite a global market facing increasing supply from the US and Brazil. A key factor to watch in 2018 according to MLA will be whether US consumers lift their consumption and eat more beef to soak up some of that increased US production, or whether more will flow onto export markets.

Locally cattle markets are coming under pressure after running at historically-high levels for three years, not just because of the intensifying competition in export markets, but the number of cattle that could be forced onto the market if the drying seasonal trend continues.

Against this backdrop we asked Cattle Council of Australia Chief Executive Officer Margo Andrae to outline five key issues focusing the council’s attention as it looks to the year ahead.

Here are five that are currently front of mind for the council, revealing some of the main issues emerging for grassfed producers at industry level:

Fake Meat: ‘Meatless’ meat is certainly having a moment – whether it turns out to be a passing fad or a lasting trend remains to be seen. Some predict big impacts on consumer demand for real meat, but the reality is not a lot is yet understood about the various fake meats and the likely ramifications of each for markets, consumer demand and the Australian beef cattle industry in future. “We are really keen to understand what the industry is potentially facing in the future around that,” Ms Andrae said. “That will be a big one the Marketing, Market Access and Trade Committee will be looking at”.

She also emphasised the Australian beef industry’s positive story of world-leading animal welfare standards while also directly addressing the issue of methane emissions through the carbon 2030 initiative. “There really is nothing better than real beef,” she said.

Market access issues: sights set on Taiwan/beef import applications: Australia is currently preparing for upcoming important trade access negotiations with the UK and EU post-Brexit and the Indonesia-Australia Comprehensive Economic Partnership Agreement. The Council’s Marketing, Market Access and Trade Committee is working with the Government to progress these negotiations for grassfed producers. The industry is also focusing on working to expand Australian beef exports to Taiwan, home to the highest per capita meat consumers in Asia and a market that is increasingly buying premium beef cuts, which Australia is well positioned to supply.

Ms Andrae said the council has been working to engage more closely and proactively with the Government around a range of key issues including, biosecurity, animal health and welfare and the requests by the US, Japan and other countries for access to Australia’s import market. It is understood the Government will work through each application one by one and is currently working on Japan’s application, which would be focused on small volumes of premium quality Wagyu beef. “We’re a trade based nation so obviously we are open to trade, however, as a starting point we are asking for the same standards to be applied to other countries that are applied to our own industry,” she said. “It is about protecting our biosecurity, protecting the hard work our producers do, we certainly have an expectation the Government will be strong around animal health and welfare, biosecurity and all of those things.”

Raising claims/brand integrity: The Australian cattle industry has been proactive in its efforts to develop a stronger beef language, evidenced by the launch of the new Eating Quality Graded (EQG) cipher as an alternative to dentition based ciphers like YG, YP and PR. However, the industry’s efforts to develop clear language to ensure integrity around animal raising claims have not been reflected in recent Government processes. A decision made by the ACCC in late 2017, allowed the Certification of a Trade Mark to utilise a free range claim when the production system included a confined grain feeding period. “Industry beef language was not taken into consideration when approving the CTM,” Ms Andrae said. “How do we get Government processes to acknowledge the work being done by industry? There is a lot of work around giving that ownership back to the industry on provenance so they can demonstrate the standards or claims.”

Cattle health declaration up for review in 2018: Cattle Health Declarations, which allow producers to make an assessment of cattle they might be purchasing and the biosecurity risk those cattle may pose, will be up for review in 2018. Following producer feedback that there was not enough consultation prior to the introduction of JBAS and LPA changes, Ms Andrae said there will be an increasing emphasis on ensuring adequate consultation around this review. “Any changes required for the cattle health declarations will be done in consultation with producers,” she said.

DEXA: With adoption of DEXA objective carcase yield measurement technology increasingly moving into 2018, Ms Andrae said a key focus of Cattle Council is to make sure that as the roll out occurs on a large scale, the data generated is used to benefit cattle producers.

“We have seen a lot of media around who owns the data, but it is really a case of taking the next step around technology,” she said. “We’re very supportive of that, however, we have to make sure producers don’t get left behind,”

In the meantime, Ms Andrae who was appointed to the CEO role at the CCA AGM at Alice Springs in November, met with producers in South Australia last week, where she visited local properties and saleyards and addressed a Livestock SA dinner at Robe on Friday night. She said she is focusing on increasing CCA’s communication with grass fed producers.