A new website launched today will enable industry and community stakeholders to provide their feedback on the draft Australian Beef Sustainability Framework.

What is sustainable beef production in Australia?

For the first time, that question now has a clearly defined answer.

After 12 months of work, including wide-ranging consultation with industry and the broader community, an 11-member Sustainability Steering Group has today released Australia’s first Beef Sustainability Framework.

The draft document will be open for industry and public feedback via a new website until the end of February – click here to view – with the final document to be formally launched in March.

However the document won’t be final in the true sense of the word. It is intended to be a living document open to continual review and adjustment by an industry committee in response to changing sustainability issues in future.

The framework is designed to enable the Australian beef industry to measure its performance on a range of sustainability measures, and to communicate that performance to the broader community.

The document ties in with the objectives of the Meat Industry Strategic Plan 2020, released last year.

It has been coordinated by the Red Meat Advisory Council and funded by Meat & Livestock Australia.

When moves to develop a sustainability framework for the global beef industry began six years ago, it triggered a debate in the Australian cattle industry about the prospect of expensive and burdensome on-farm certification systems being imposed on Australian cattle producers.

The Nationals also became involved, speaking out against handing decision making powers in any framework development to groups such as the World Wildlife Fund, which had campaigned actively for decades for stringent Government controls over landholder activities in Australia.

That debate resulted in the Australian cattle industry opting not to join other beef producing countries in creating a Global Beef Sustainability Framework (that work is also progressing – see the GRSB website here) , but to create its own sustainability framework.

The process has since involved consulting with a diverse range of industry and external stakeholder groups, but with an industry committee making the final decision on the direction and content of the final framework. 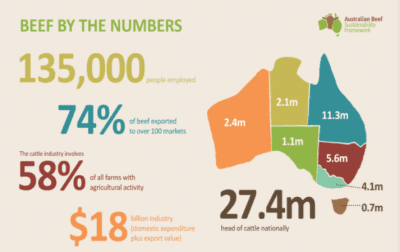 The framework released today draws on 40 sources of industry-level data to measure the industry’s commitment to sustainability, and does not impose additional cost or targets at an individual farm level.

“We now want all members of the beef value chain – from producers to consumers – to help us define what sustainable Australian beef means; and how we measure and report this to the wider community,” Mr Mackay said.

The draft Framework focuses on four key themes with priority areas for industry to tackle progress:

“We wish to paint a clear and honest picture of sustainable beef in Australia and how we are responding to changing demands within the community to position our industry for the future,” says Mr Mackay.

“It’s now open to the industry and the community to comment on whether the areas identified to date are the right ones,” Ms Bondfield says.

“The framework will be used to help guide continual improvement by industry, so it’s critical that we have the right priority areas.”

Source: RMAC. Open consultation via an online platform runs for six weeks from January 11 to February 17, 2017. Visit http://www.sustainableaustralianbeef.com.au/ to join the conversation and offer feedback on the draft Framework.