A TEMPESTUOUS political debate has zeroed-in on the rights of farmers to produce livestock for human food consumption, without suffering endangerment due to escalating threats and illegal intimidation driven by “vegan terrorists”. 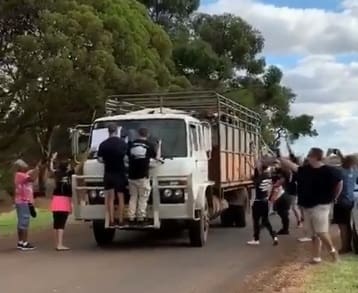 A ferocious war of words erupted last week as new laws progressed to pass Federal Parliament and deliver on a Coalition Government election commitment to introduce tougher penalties and better-protections for the agriculture sector, to tackle heightening animal rights activism throughout Australia.

During a frequently colourful and passionate Senate debate, One Nation Leader Pauline Hanson said she was thankful the recent spate of “vegan terrorism” hadn’t yet resulted in any “loss of life”.

“The consequences of this vegan terrorism, by a group that is otherwise seemingly not making any true contribution to society, can be financially damaging, harmful to livestock and, in cases, has created great fear among family members,” she said.

“Thank God that there has been no loss of life at any time as a result of these illegal actions.”

Senator Hanson said to actually call the protestors heroes was “disgraceful” and stressed they were “breaking the law”.

“The true heroes are the people who fought for this nation in battle to give us freedom and what we have today,” she said in response to contribution from the Greens.

“These (activists) are people who are going out purely to incite violence and to trespass on other people’s property.

“These protesters have to realise that they can’t just go out there and shut down businesses and destroy people’s lives at their own whim because it doesn’t suit them that animals are used in the food chain – that’s what it’s all about at the end of the day.” 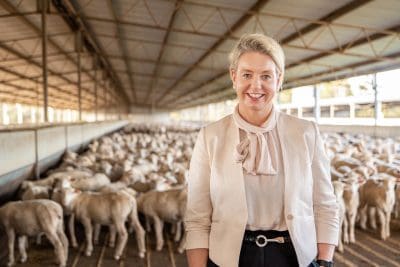 Agriculture Minister Bridget McKenzie was typically forthright in backing farmers saying the Federal Government’s new laws were a “firm but necessary response” to recent incidents targeting Australian farmers, their families, their workers and their businesses.

“These incidents were enabled and encouraged by the sharing of information online and by inciting people to harass and intimidate law-abiding Australians,” she said.

“Animals have been killed and maimed as a result of these protesters’ behaviour, not to mention the human cost of those actions, being the mental damage done to families and workers, and indeed the economic damage, with businesses being closed down because of the ongoing harassment by people who think their views of how the world should run are more important and should be prioritised over the views of other Australians – specifically, those who farm livestock in this country.”

Senator McKenzie said the Government wanted to ensure farming families could go about their business of raising livestock and keeping high animal welfare standards and those who seek to damage such aims would “feel the full force of the law”.

“Farmers are a critical part of both our community and our economy and they should not be subject to illegal invasion of their property – they deserve to feel safe in their homes and at work,” she said.

“I’m yet to meet a vegan I don’t like – but I do not expect them to tell me I do not have the right to enjoy a beautiful Angus porterhouse whenever I like.

“That is what the Australian body politic should be about – having a robust democracy where the meat-eater and the vegan can sit down as one, enjoy each other’s company and debate respectfully their differences about food production – not thinking that it’s okay to go into each other’s homes, onto each other’s property, and actually harass, intimidate and put people out of business.”

“Labor are prepared to support laws to better protect farmers and others involved in the agriculture sector from unlawful protests by extremist protesters on their land and on their premises,” he said.

“If the Greens want to stand side by side with extremist protesters who issue death threats, who issue threats against children, who publicise the street addresses, premises and locations of families and children, and encourage people to take action against those individuals, well, that’s a matter for the Greens.

“But that is not something that Labor supports – while we do of course support the right to legitimate civil disobedience and protest.”

ACT Liberal Senator Zed Seselja attacked Labor and the Greens, saying the legislation represented a choice for Parliament on whether they sided with “hardworking, lawabiding farmers” who produce food and fibre for the nation or sided with “vegan terrorists”.

“The Greens have made it clear, to their credit, that they are on the side of vegan terrorists…we wouldn’t expect anything less,” he said.

“(But) the Labor Party seem to be having a bit of an existential crisis on this.

“(Opposition Leader Anthony Albanese) had to make it clear to some of his caucus…that the Labor Party are actually not the party of vegan terrorists (but) it doesn’t appear to be a clear majority view within the Labor Party.

“It appears to be something that they are quite conflicted on.

“You can imagine in the caucus meeting Mr Albanese saying to his colleagues, ‘No, that’s really not what we’re about; we are not about supporting vegan terrorists,’ and others in the faction saying, ‘I don’t know; I think maybe we should support vegan terrorists’.”

‘Vegans are not terrorists’

Greens MP Adam Bandt said he was “absolutely gutted to hear Mr Albanese had used the term ‘vegan terrorists’, during the course of debate on the Government’s new Bill.

He said “Vegans are not terrorists” and that should not be used as a justification for trying to pass the Bill.

“That is an insult to people who are taking steps in their own lives to reduce the suffering imposed on animals,” he said.

“If people want to choose to become vegan or vegetarian then they are entitled to do that – they are not entitled to be called terrorists.

“That is something that the member for Grayndler should come back in here and apologise for, for using that term.

“It’s an……absolute insult and a disgrace.”

Queensland Nationals Senator Susan McDonald said she and some of her colleagues had recently visited facilities such as the Lemontree Feedlot and an abattoir and butcher shop to hear directly from “victims of this illegal activism”.

“To these people the invasion was as distressing as you can imagine, and the loss of security and the sense of safety in their own home or workplace is unacceptable,” she said.

“I deeply resent members of the Greens in any way comparing the peaceful protests that farmers may have engaged in, and will still be able to enjoy with this legislation in place, with the terrifying, offensive and militant invasions that have taken place in Queensland.

“Aussie Farms head Chris Delforce’s claim that tougher laws won’t deter him from his campaign against farmers provides one positive – that is, we now have no doubt about the aims of those who would invade family homes, intimidate legitimate businesses and disrupt, with these illegal protests, everyday Australians getting to work and hospitals.

“They are simply picking a cause du jour as a vehicle for more sinister aims, sparking rebellion against what they see as an outdated and unfair system so that they can impose their own worldview.

“To be clear: while these invasions are a fun outing for some, it is not for those living in fear of when the next invasion will come.”

WA Liberal Senator Slade Brockman said the standout issue for him was the “fear” that exists in the farming community, about the recent rise in anti-farming, activist protesting.

“When we hear words thrown around like this being about ‘quashing dissent’, ‘cracking down on legitimate protest’ and ‘cracking down on civil disobedience’ and that it’s ‘instilling fear in the hearts of animal activists everywhere’, I think the people of Australia, particularly those of rural and regional Australia and those who work in agricultural industries, would just have to laugh at those sorts of comments.,” he said.

“There is fear in the community.

“It is fear of the interference of radical animal activists in people’s lives and people’s businesses.

Senator Brockman said farm trespass laws needed to be strengthened right around Australia, not just to protect people and businesses but because biosecurity is “actually extraordinarily serious”.

“To not take it with a huge degree of seriousness is to let down our entire agricultural community,” he said.

“Just recently, I think this was reported this week, a Tasmanian farmer has actually been jailed for 11 months for illegally importing garlic.

“That shows how seriously we do actually take this in our laws, in some cases – but a $1 fine for breaching biosecurity.

“My goodness me, that just shows how out of touch some parts of our judiciary and our community are about the seriousness of this.

“Stopping people from inciting others to trespass on agricultural land, to disrupt agricultural businesses or to threaten the livelihoods of Australian farmers and related farm businesses is absolutely essential.”

NSW Nationals Senator Perin Davey said a friend who owned and managed an internationally recognised sustainable piggery, and lived there with her young family, had been targeted by activists 10 times, with their property broken into.

“In one instance the activists broke in during the dead of night,” she said.

“Breaching strict biosecurity protocols and risking the health of the whole herd of pigs, they woke the resting animals, and those that didn’t wake of their own accord were poked and prodded until they woke squawking and screaming.

“The distress they caused for the animals got exactly the results they wanted: footage that they could release not to the authorities, to actually report animal welfare concerns, but to the media.

“These campaigns are not about truth; they are about misguided ideals.”

Senator Davey said if the activists were “truly concerned” about animal welfare, they wouldn’t break into farms and collect hidden footage to then hold onto and release “only at a time that suited their media strategy”.

“If they were genuine and they had genuine concerns about animal welfare issues, they would report it immediately to the right authorities,” she said.

“Not only do the actions of activists have animal health and welfare consequences, breaching biosecurity protocols and stressing animals, but there are human consequences as well.”

Tasmanian Greens Senator Nick McKim engaged in an odd but lively exchange with Senator McKenzie where he referenced video game company Nintendo and fictional characters from their Pokemon GO game.

“I’m putting on the record that I think it’s entirely possible that, if someone chases a Pikachu which has been placed on a private farm and, in chasing that Pikachu, climbs the farm gate and damages a hinge, Nintendo will be caught,” he said.

“In your attempts to criminalise entirely reasonable behaviour that is for the common good – that is designed to address the climate emergency, animal welfare and the biodiversity crisis, because this is about protecting nature, protecting diversity, encouraging strong action on climate change and protecting the carbon that’s embedded in our beautiful, magnificent native forests – and criminalise people who are trying to stand up for our children and our future generations, you’ve cast your net too widely.

“You have also picked up in your draconian dragnet companies who create video games.”