THE first load of cattle pellets for bushfire-affected farmers in north-east Victoria left Ballarat today amid fears of a coming shortage of uncommitted fodder available for livestock in fire-ravaged areas.

The 34-tonne of specially formulated cattle starter pellets will be delivered to the Tallangatta distribution depot in East Gippsland today for distribution to livestock owners in the area. 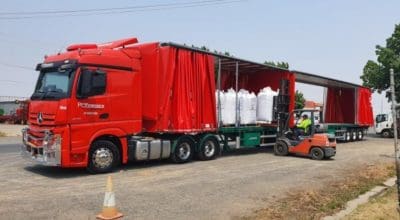 Cattle pellets being loaded for delivery to bushfire-affected areas in north-east Victoria.

The $17,000 pellet load has been coordinated by the Victorian Farmers Federation, paid for by the Commonwealth Bank, prepared by Riverbank Stockfeeds at Werribee at a discounted price and put into one-tonne bags by The Haymarket at Ballarat.

Also key to the relief effort have been the Livestock & Rural Transporters Association of Victoria and Ron Finemores Transport.

VFF Livestock Group president Leonard Vallance expected provision of pellets into fire-affected areas would be ongoing, with predictions the nation would run out of uncommitted fodder within eight weeks.

He said pellets were requested by the north-east Victorian farmers, animal nutritionists were consulted and Riverbank designed the pellet ration.

“I think it will be an ongoing thing because the fodder association has come out and said the state is going to run out of fodder in another 6-8 week’s time and we need to be smart about how we feed these stock – these poor buggers that have nothing.”

“By the time we get down to March-April, without an autumn break, we are going to in a pretty precarious situation.”

Areas of south-west Victoria and south-east South Australia have produced good quality silage and hay this year, but most of it was already committed.

“There was a lot of hay moving north, even before the fires took hold and what we are going to find is that East Gippsland and other regions are going to be in a fodder deficit and need more than what was initially estimate.

“The fires are just going to add to an already tight supply situation,” he said.

“By the time we get to April, without an autumn break, it is going to be very hard to find fodder.”

This situation would make other sources of stock feed such as pellets highly sought after, more valuable and potentially hard to find, Mr McKew said.

Mr Vallance said the first fodder was delivered to affected farms in the north-east area had to be delivered by helicopter. He said the highway between Bairnsdale and Omeo was a “bloody disgrace … an overgrown twisty track.”

“They are going to have a Royal Commission, but the reality is the roadsides need to be firebreaks, not wildlife corridors and the bush needs to be segmented with firebreaks so that bits of it can be burnt and managed – instead of this charcoal from one end to the other.”

Mr Vallance said he will also be pushing for all rural residents to become members of the Country Fire Authority.

“That’s one of the things I will be pushing for; if you live a metropolitan fire brigade area it should be mandatory that you be a member of the CFA, so you get some fire training.”

He said East Gippsland received a flood of hay last week at Tallangatta and it was all used, but future load deliveries needed to be co-ordinated.

Mr Vallance said the VFF was seeking donations from other pellet manufacturers. Monetary donations and freight subsidy applications can be made to the VFF on 1300 822833.

Apart from fire control and management, the priorities in East Gippsland now were to assess the damage, euthanize injured stock, and provide adequate feed and water for the next three months, he said.

“And to get communications, power and water back on up there.”

Mr Vallance said under its Memorandum of Understanding with the Victorian Government, the VFF was managing the freight subsidy. He urged all providers of livestock feed to any affected farmers to register with the VFF to obtain the subsidy.

“They have to register with the VFF.”

Mr Vallance said VFF Livestock councillors manned the distribution centre at Bairnsdale over the weekend and last week, and staff members are working with government agencies to ensure people are kept safe.