Australian farm commodity prices are being buffered by the falling Australian dollar to an extent not seen since 2008, with further interest rate cuts and falling terms of trade expected to continue pushing the exchange rate lower.

The National Australia Bank’s latest Agribusiness Rural Commodity Index for April shows an increasing gap between the US$ and A$ indices, since they intersected in September 2014. 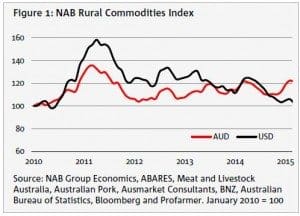 General manager of NAB agribusiness, Khan Horne, says the index in A$ terms is on the way up and for the US$, on the way down.

“If this occurs, the gap between the A$ and US$ indices will widen further over the coming months.”

“We expect another rate cut is most likely to occur in May, but if the economy continues to improve, the cut could be further delayed,” he said.

“A second cut to below 2 percent is something we see as a possibility of only 35-40pc – significantly below the market’s current view. NAB’s forecast is for rates to start to rise again by late 2016,” Mr Horne said.

The NAB Rural Commodities Index fell 1.7pc in March in A$ terms, led by lower beef, lamb, fruit, vegetable and sugar prices. In US$ terms, the index was down 3.3pc.

Cattle prices began to ease in February and continued to fall until late March. Overall, the Eastern Young Cattle Indicator fell 4.6pc (A$) month-on-month to A424.7c/kg.

Across other commodities, prices for wheat, wool sugar and cotton are expected to fall in 2014-15 compared with last year.