AUSTRALIAN beef exporters are riding a surge in demand and price for lean manufacturing beef – most typically used to produce hamburgers.

As Beef Central’s home page dashboard graph shows, quotes for 90CL cow meat destined for the US market have hit a 20-month high, reported on Friday at 825.6c/kg in Aussie currency terms. That’s up another 34c/kg over the past month, and continues an almost unbroken price rise sequence since the start of the year. 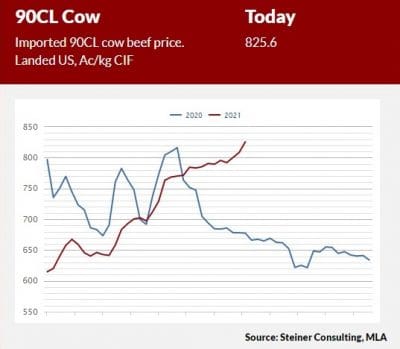 It’s part of the reason why some export processor grids are currently offering an unprecedented 655c/kg carcase weight for heavy cows in Queensland, and as much as 680c/kg in southern states.

Trade sources spoken to for this report suggest that similar equivalent prices are being seen for meat trade into other trim markets, especially Japan, Korea and China.

One contact quoted the market yesterday for export 90s as high as 805c/kg (FAS terms), with an additional 35c/kg freight, equating to 840c/kg (A$ CIF).

As can be seen on the 2020-2021 graph published above, the current lean trim price exceeds the sharp spike seen in mid to late May last year (blue line), when up to 40 percent of US beef processing capacity was knocked-out for several weeks due to COVID-related plant closures, or severe operating restrictions. This caused some panic trim buying from overseas.

The only time export grinding beef prices have exceeded current levels was another brief ‘spike’ witnessed in late 2019, when Chinese buyers reacted dramatically to protein shortages brought on by a second wave of African Swine Fever sickness in China’s domestic pig herd.

“Demand on beef has been very, very solid in the US and other markets recently. In fact it’s just continued to go up, and up. The cutout value on domestic USDA Choice and Select cattle has just continued to roar north, and Australian grinding beef is being dragged along for the ride,” he said.

“Essentially, where that benefits us (Aussie exporters), is that all of those mid-range primals like a cap-on topside or a chuck roll are getting dearer, so the trade in the US is no long consigning them to the mincer, to supplement ground beef supply. They are simply too expensive to mince, and that’s being reflected in prices for imported lean trim.”

“That’s happening despite pretty strong cow kills in the US, due to encroaching drought. And there is no sign this trend will come off in a big rush. There might be some small ebbs and flows, but we are getting towards the end of the northern hemisphere grilling season.”

“The spot market for manufacturing beef in the US has actually been lower than the out-front market, and it’s purely because they keep looking at our kills, and how much of our meat is not going there – at the same time as the NZ cow season is more or less done.”

“There’s been a little more South and Central American beef entering the US to compensate – but it hasn’t made up the shortfall.”

Japan trade in manufacturing beef ‘continued to be busy,’ the trader said, and the nature of the Japan trade had changed somewhat.

“It used to be that you could never trade trim into Japan at anything leaner than 85CL, but there’s a lot of 90s and 93s sold into Japan out of both New Zealand and Australia this year.”

“Mince is not necessarily a big item in retail in Japan, like it is in Australia or the US – but there is a lot of ground beef sold at food service level in Japan.”

A number of factors are evidently in play in driving grinding beef prices higher this year, exporters say. Here’s a quick summary:

Competition among export customers is playing a part. 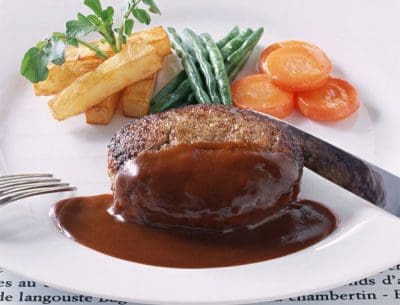 Some export traders have concluded that there is some ‘down-trading’ going on, with difficult financial conditions in Japan prompting some customers to move form more expensive muscle meat, to hamburger beef (known in Japan as ‘hamburg steak,’ or Hanbagu – see image.)

Currency is playing a part ibn current pricing, when measured in A$ terms. The A$ today is valued at US72.5c, but has traded in the 71’s for most of the past week. Just two months ago, it was worth close to US76c, heightening current pricing, when measured in A$ terms. At the start of the year, the A$ was still worth around US77c, declining about 7pc since then.

Continued tight supply out of Australia is also influencing price. Barely three million Australian cattle were slaughtered in the first six months of 2021, and numbers will rise to only around 3.4 million in the second half, MLA forecast recently – amounting to what promises to be the lowest calendar year kill in 35 years.

New Zealand slaughter is expected to remain limited for the next couple of months, probably running at about 26-27,000 head per week, one analyst predicted recently. More favourable duty rates than Australia’s are also seeing NZ favour China trade over the US. Further compounding the lack of product availability from New Zealand is the fact that China demand is expected to remain strong due to less product availability from Australia and Argentina.

Another factor in current high manufacturing beef prices is the continued strength being seen in the domestic Australian beef market – both at retail, and in the recovering food service sector (perhaps NSW excepted).

MLA’s weekly Steiner report last week suggested limited offerings from Oceania (Australian and New Zealand) and increased interest from domestic US end-users had caused imported prices to incrementally improve during the course of the week.

“Interesting to see US media reports quoting a major restaurant chain that they expect significant price inflation in the US protein space for the remainder of the year.”

“But while high prices are clearly top of mind for many US buyers, so is availability. Packers have struggled to fill order due to labour bottlenecks. Wholesale beef prices have spiked in the last three weeks, due to end-users getting shorted in their deliveries and having to go procure additional production the spot market.”