Like other dry sown crops this year the prospects for forage oats plantings throughout eastern Australia this winter will likely hinge on whether rain forecast for the last few weeks of June comes to fruition. 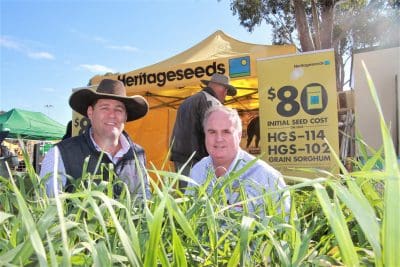 Seed suppliers and agronomists Beef Central spoke with on the opening day of FarmFest yesterday suggested that the area planted to forage oats this year is back on previous years given the lack of planting rain, but there is still a reasonable volume of seed in the ground.

Northern NSW Territory Manager and Northern region Tony Stewart said small areas of oats were early planted on scattered rains in February, but since then a significant area of oats was dry planted in March in anticipation of rain.

A lot of that crop is still sitting in the ground dry, and some of the February planted crop which missed the follow up rain required for secondary root development is now being grazed.

“Certainly there is plenty of volume that has been planted, but as far as the volume up and being grazed it is probably less than what you would typically expect at this time of year,” Mr Stewart said.

“What is in the ground is comparable to previous years, just not what has come out of the ground.

“In our favour we still have quite good soil temperatures for this time of year, so when it does rain you should still see some reasonable growth from those oats. Oats as a crop as far as any crop goes is quite tolerant of being dry sown and sitting and waiting for rain.”

Mr Stewart said if forecast rain for inland NSW in particular later this month does eventuate, more of the oats seed that is still sitting in sheds could still go in the ground. The situation in Queensland is a mixed bag, with dryland plantings varying from virtually nil to surprisingly large depending on the area.

At Rolleston, Jeff York from Acres Rural Supplies said a rain change of about 15mm one month ago helped to get about 80pc of the normal area in the district planted to oats.

While conditions were worse in the Dawson Valley around Moura and Biloela, at Rolleston the situation was not as bad.

“Some of the oats looks okay, and you would say some is struggling and is now looking for a drink,” he said.

Highlighting the deteriorating season, May rainfall across Australia was the third-lowest on record, according to the Bureau of Meteorology.

Areas experiencing historic rainfall deficiencies have expanded in the past month as the below 14 month deficiency map indicates:

Soil moisture in the lower layer (from 10 cm to 100 cm deep) for May also decreased over most of Australia: 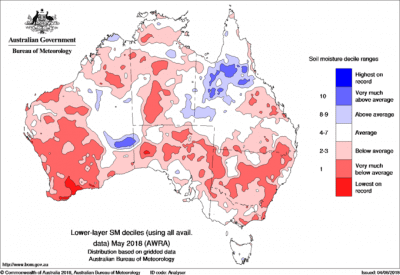