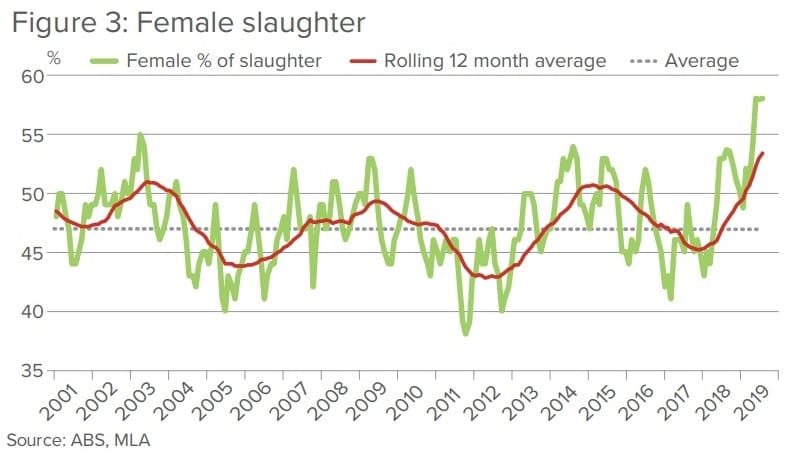 Cow and heifer slaughter reached 58 percent of total adult cattle slaughter for three consecutive months from March to May, as many beef producers continue to destock or manage significantly depleted breeding herds.

“The lotfeeding sector continues to support national beef production and has been a critical link in the supply chain during the prolonged dry period,” Mr Cheetham said.

. The number of cattle on feed reached a new record in the March 2019 quarter and has remained above the 1.1 million head mark for the fourth consecutive quarter.

“This number is expected to remain high, given the challenges of finishing cattle on limited pasture reserves.”

Mr Cheetham said the national herd is estimated to have declined 7.3%, to 26 million head for the year ending June 2019, while estimated branding rates have also fallen, reducing the number of calves on the ground this season.

“On the upside, prices for finished cattle have improved this year and are likely to find continued support given an expected tightening of supply during the remainder of the year,” Mr Cheetham said.

“This year has seen the largest premium between the heavy steer indicator and the Eastern Young Cattle Indicator in the last decade. Young cattle prices have been reasonably subdued and, until seasonal conditions allow restockers to re-enter the market with confidence, the store market is unlikely to see any significant price corrections.

“However, if a solid break in conditions were to materialise, there is the potential for young cattle and productive female prices to experience significant increases.”

Mr Cheetham said demand for Australian beef had remained robust this year, supported by a depreciating Australian dollar and rising demand from China.

In the first half of the year, Australia’s total beef exports increased 6pc and grainfed shipments reached record levels. However, coming up against some supply constraints in the second half of the year, 2019 exports are expected to finish the year steady at 1.13 million tonnes shipped weight.

“Dry conditions have also supported cattle exports, with total shipments up 19% in the first half of 2019. Cattle shipments are forecast to finish 2019 at 1.15 million head, up 6% year-on-year, ” Mr Cheetham said.

“Beyond the weather, factors such as exchange rates, production in the United States and cattle price movements, trade developments and demand from China will remain important price drivers for Australian beef.” 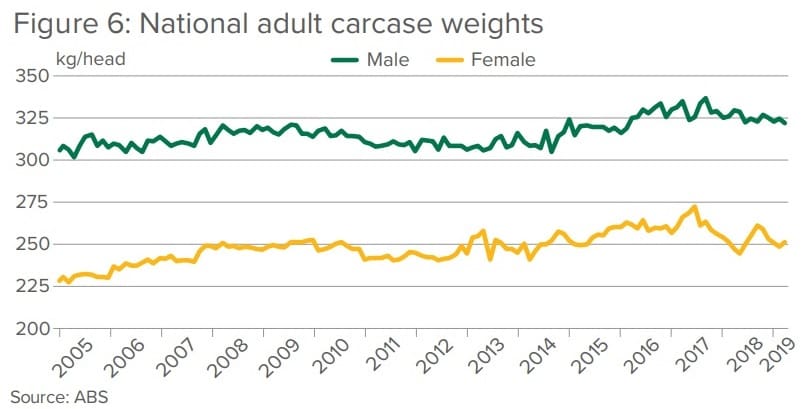