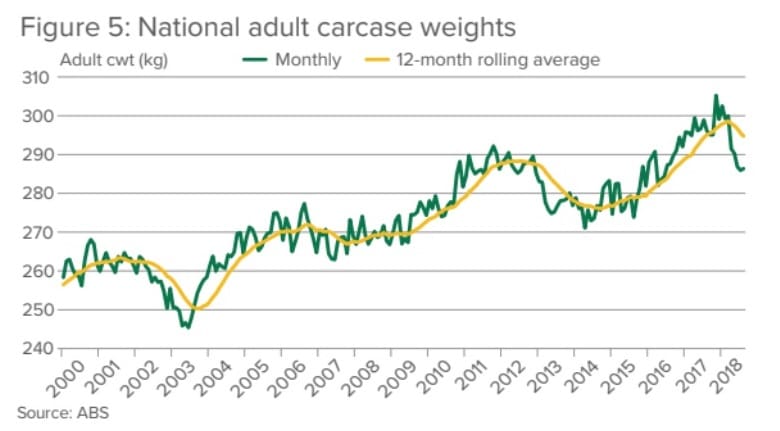 MLA’s market intelligence manager Scott Tolmie said while October brought useful, though not drought-breaking rain to parts of the eastern states and restored some confidence to the store cattle market, widespread follow-up rain was needed for any lasting benefit to pastures and crops.

“Despite poor prospects for pastures entering into 2019, slaughter numbers will begin to be constrained by a shrinking pool of available cattle,” Mr Tolmie said.

The female slaughter rate has risen to levels not seen since the last drought in 2015, though notably, this time off a lower base herd, which will have repercussions for cattle supply and production in coming years.

“Typically, the Australian cattle herd contracts when the proportion of female slaughter exceeds 47pc of total slaughter – a threshold first surpassed in May and the female contribution to the kill has increased since,” Mr Tolmie said.

“In 2018, the Eastern Young Cattle Indicator has traded at a discount to the finished market since April, as worsening seasonal conditions deter restocker buyers,” he said.

“However, the continuation of dry conditions or just ‘one-off’ rainfall events would likely see another wave of destocking, especially in the north, placing further downward pressure on prices.”

Despite increasing global competition, beef exports for the calendar year-to-September grew 12pc year-on-year, to 840,500t. On the back of record grainfed cattle turnoff, exports to Japan and Korea have recorded increases of 7 and 15, respectively.

Exports to China in the first nine months of 2018 surged 55pc year-on-year, while shipments to the United States were slightly down, heavily impacted by increasing domestic production.