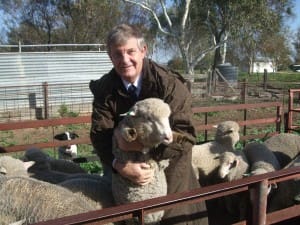 Veterinarian and Liberal Senator for WA Chris Back

Draft legislation which would require evidence of malicious animal cruelty to be reported without delay is to be introduced to the Senate by veterinarian Senator Chris Back.

The draft legislation which Senator Back says will protect animals under the Criminal Code has gained Party room support from the Coalition Government.

Dr Back said the first part of the bill ensures that if a person takes visible images of action they believe to be malicious cruelty to animals, they must report this to the responsible authority with a minimum of delay.

This would enable authorities to investigate and act swiftly to ensure further cruelty is averted.

“As a result, any capacity to fully examine allegations or evidence, prosecute if proven, and prevent further incidences of cruelty are severely limited.

“The motives of many activists are clear by their own published statements.

“They want to see the end of Australia’s livestock industries with many opposing meat production and wanting to drastically reduce Australia’s meat consumption.

“Activists are agitating against many of Australia’s primary activities in the pig, beef, sheep and wool, and sheepmeat industries. This action is intended to harm Australia’s enviable reputation for the overseas supply of livestock and products and our advancement in animal husbandry and welfare standards. In so doing, they are directly attacking Australia’s export trade and the profitability of agricultural and rural communities generally.”

Senator Back noted a recent decision by RSPCA NSW to cease prosecution of animal cruelty charges against a NSW piggery due to unlawfully obtained video footage.

In its decision to discontinue proceedings it was stated that “RSPCA NSW implores any person who witnesses or obtains evidence of animal cruelty to report it to the relevant authority immediately.”

“Such actions are criminal in nature, invade the privacy of affected persons and can place animals at risk from a welfare, health and husbandry viewpoint,” Senator Back said.

“Of equal importance is the threat to Australia’s biosecurity from animal activists who are trespassing on quarantine or intensive animal production facilities. The animal welfare and economic disaster which would unfold in the event of an exotic disease outbreak in Australia is beyond comprehension.

“The draft legislation is designed to complement that of Australian States and Territories.

“If a member of the public believes they have witnessed an act of malicious cruelty to an animal or animals, they should report it to the responsible authority immediately via phone or online in the state or territory that it took place. Following reporting, they should then provide any footage obtained within five days of filming the event.”