Does the red meat industry still have an appetite for big-picture research? DOES the red meat industry still have the appetite to embrace bold, big-picture research like that which blazed a trail to produce Australia’s world-leading AuctionsPlus online marketing technology?

The question came up during last week’s AuctionsPlus 30th anniversary dinner in Sydney, where 300 stakeholders gathered to salute the platform’s achievements and future prospects. From small beginnings in 1986, AuctionsPlus last year sold $460 million worth of sheep and cattle to all points of the continent.

By any standards, it was a bold move by the then Australian Meat & Livestock Corporation to commit more than a million dollars to researching and developing the concept of electronic/online livestock trading in the early 1980s, long before the advent of internet or personal computers. After the launch of Computer Aided Livestock Marketing in 1986, AMLC backed the project with a further $16 million in operational and development support, to get it on its feet (see earlier article).

But does the industry today have the same sense of vision and wherewithal to tackle such projects?

Hampered by reduced livestock slaughter, and hence transaction levy funds in the years ahead due to drought, Meat & Livestock Australia (AMLC’s successor since 1997) has in recent times reduced the breadth of its R&D portfolio, and has arguably tackled more ‘safe’ R&D project work where positive outcomes look more likely.

Beef Central asked a speaking panel of industry stakeholders at last week’s AuctionsPlus dinner for their thoughts on the topic: 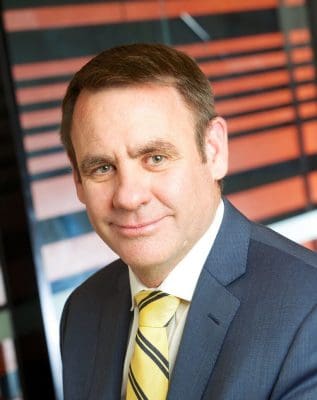 MLA managing director Richard Norton suggested that the producer-owned service delivery company, in its plan out to 2025, still had the capacity to tackle big picture projects like CALM. He placed the Meat Standards Australia project in the same category.

“We’d expect by then to be able to give producers feedback on perhaps 9.5 million cattle processed each year across the country, on an individual cuts basis for 40-odd cuts per carcase, as well as intra-muscular fat, to give predictors on performance, right back to genetics – all executed and delivered from satellite technology,” he said.

“Those long-term visions like CALM and MSA will continue to underpin the red meat industry. I think the appetite is absolutely there, and plenty of visionaries left in the industry to execute them,” Mr Norton said

He targeted the trend towards greater openness and transparency within red meat supply chains -, both in terms of price and product – as an important opportunity in this space.

“As every supply chain matures, we’re seeing a lot more collaboration going on, between producer, processor and end-customer. Our processing sector realises the power of branding and provenance is the only way we can continue to compete in the red meat industry on a global scale. Knowledge sharing is a critical part of making that happen.”

Mr Norton pointed to the establishment of a consortium based out of Armidale around genetic evaluation as another important development.

“How do we fund future genetic evaluation for the livestock industry, that ultimately improves productivity over the next five years? In this case, MLA is a foundation supplier of funds and capability, but we’re pleased to say that through other entities participating in this model, we’ve attracted $38 million worth of collaborative investment – such is the need for better livestock evaluation and genetic performance.”

“It’s big-picture research like this that is going to drive the industry forward.” 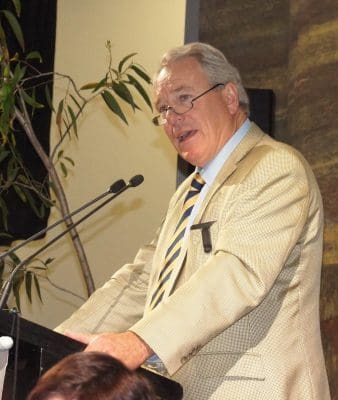 Former Sanger Australia head Richard Rains told the gathering that while MLA might not be directly responsible for it, there was an absolute must and need within the beef processing sector to tackle ‘big-picture’ projects that would drive the move to mechanisation in the beef fabrication process.

“We’re by far the dearest processor in the world. The US is significantly cheaper than us, but they have Mexican labour at $9 an hour. We shouldn’t try to go there – but we are clever enough, and have the capacity to develop a lot more in the field of automation and robotics in processing, to strip-out a lot of that cost,” Mr Rains said.

“The lamb industry us already starting to do it and beef has to move the same way. To be fair, beef is a very different kettle of fish, because a lot more lamb cuts are sold bone-in, but we must drive hard down this mechanisation line. That’s going to take time, money and resources, but it’s an imperative,” he said.

If Australia did it, then prospects were that the US and Brazil would eventually do it too – but if it levelled all the major export players out a little, that had to be Australia’s huge benefit, Mr Rains said.

“We’ve trialled mechanised systems before (apparent reference to the incredibly ambitious, but ultimately doomed Futuretech project in the 1990s – editor) but we must spend more money on such research, and make sure we get mechanised as quickly as we possibly can. In turn that means processors will be in a position to be able to pass a better price back to the producer,” Mr Rains said.

He agreed with Richard Rains that meat processing costs, which were ridiculously expensive in Australia, was a high priority target area for such work.

“For example CPC can process an animal in its two small abattoirs in Indonesia for around $15 a head. The same beast processed in Australia costs $350 or thereabouts. Granted, there’s all sorts of quality issues in that comparison, but Australian processing, generally, had to embrace greater efficiency,” Mr Setter said.

He said that going back a few years, the industry was perhaps ‘treading water’ a little with its approach to innovation.

“There was a lot going on in the industry at that time, and we were fighting a lot of fights that distracted us. But I think we’re now moving in the right direction, and there are some exciting opportunities out there in the R&D space.”

“The challenge has always been that there are so many technologies and ideas being thrown at producers. There’s still perhaps too much ‘here’s the new toy’ with technology, and not enough ‘here is the problem we are trying to solve’,” he said.

Mr Setter said addressing efficiency issues, both pre and post farmgate, and addressing the social license to produce livestock were some ‘really exciting opportunities’ for beef.

“Competition is not between beef or sheep or goatmeat producers. It is with other proteins, other food sources and other parts of the world – and also others’ views about our social license to produce livestock,” he said.

“Efficiency, both pre and post-farmgate, are really important. But greater collaboration and sharing of information up and down the chain will definitely help improve that.”

Producers generally also needed to be proud of their success and trialling new ideas, rather than knocking the neighbour for doing something different.

“We all do it: it’s the Australian way, but being proud of what we’re all doing and looking for solutions in newer areas like feed conversion efficiency are going to be increasingly important.

“Look at what the chicken and pork industries are doing in this space. We are only just now starting to scratch the surface on feed conversion in beef cattle – a couple of breeds and producers are starting to zone in on the feed conversion efficiency issue.” 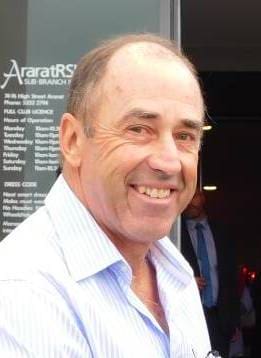 Ararat lamb producer Charlie de Fegeley said he was concerned about the next generation of livestock producers because there was ‘virtually no big research’ taking place in the pasture-based production sector, and the ‘wow factor’ may have disappeared.

“Research is gone, extension is gone, the jackaroo network is gone. Who’s going to come up? All our young kids are sitting in tractors, so I’m concerned that livestock is going to lose critical mass,” he said.

“We need some wow-factor to come back into the industry to give young people a bit of a target to head for.

“Research can help that, but until we do something about it, the industry will just begin to disappear.”