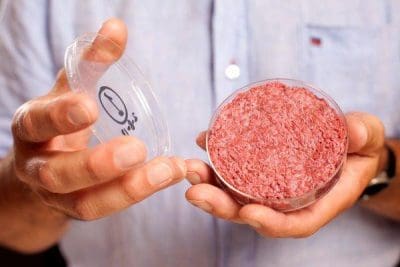 We’re living in an age of fake news and fake meat, if you follow the headlines.

In an encouraging trend, the recent rise of fake news has led to a new era of ‘fact checking’ by individuals and journalists, according to leading journalism website Poynter. “Around the world fact-checking is “booming”, Poynter recently wrote.

Fake meat, on the other hand, largely involves producing meat in a lab. Synthetic meat, test tube meat, cultured meat, meatless meat, plant-based meat, franken-meat, clean meat – call it what you will, it has been attracting some impressive investment backing from millionaires and giant meat companies in the past year, and with it, spiraling media interest.

It seems incongruous to anyone with a background in agriculture that something as natural as a cow eating grass could be considered a terrible thing for the planet, but that is a key premise upon which this new industry is being built.

What has been interesting in this era of fake news and heightened sensitivity about the need for fact checking has been a noticeable trend that has been evidence in many articles about fake meat. That is, they almost invariably repeat without apparent need for challenge the claims of the commercial proponents of fake meat against real beef, presenting their views as incontrovertible truths about conventional agriculture without any evidence of attempting to verify the veracity of their claims.

But the reality is the information that is typically used to back their claims is often far from incontrovertible or unchallengeable.

A recent Sydney Morning Herald article reporting on the global race to grow meat in labs explained that the trend is seen as a way to produce protein in a more environmentally sustainable way.

Do these figures really hold water? Does it take as much as 20,000 litres of water produce a single, solitary kilogram of beef? Or even as much as 5000 litres?

These were his calculations: “Say a two year old grassfed steer dresses 300kg and Lean Meat Yield is 60 percent. Therefore 180kg of beef is produced. Say the animal drinks 40 litres /day (generous) for 730 days. That equals 29,200 litres divided by 180kg = 162 litres per kilogram.

A further search showed the Institution of Mechanical Engineers made the above statement in a 2013 report titled “Global Food. Waste Not, Want Not”.

However, while that statement was referenced in the report, the specific reference was missing from the list of references at the end of the report.

A spokesperson for the Institution kindly responded to our inquiry and told us the source of the statement which was a 2008 magazine article produced by the Water Footprint Network, and written by the network’s founder, Professor Arjen Hoekstra, and also a UN report referencing the same source.

In the article Professor Hoekstra actually wrote that producing one kilogram of boneless beef required about 155 litres of water, taking into account only the water used for drinking and servicing that animal.

However, when you added in 1300kg of grain, 7200kg of roughages (pasture, dry hay, silage and other roughages), and the water required to grow those feed sources, he said the water footprint of 1 kg of beef would add up to 15,500 litres of water.

Professor Hoekstra, from the University of Twente in the Netherlands, is the inventor of the Water Footprint concept, a method used to account for the total amount of water used to produce something.

This model is used widely in the environmental movement, but has also come under serious challenge by others in the academic community about whether it is a fair and accurate way to measure actual water use.

A key concern was that ‘Water Footprints’ made no allowance for whether a producing area is water- plentiful or water-short.

“One must consider the scarcity or abundance of water and land, as well as downstream water uses to evaluate the significance of any environmental impact when compared to the status of these variables in the absence of grain or meat production. Simply comparing the water footprints of grain and meat does not provide helpful environmental information.

“It is overly simplistic and misleading to suggest that water footprints should be reduced without considering the context and purpose of water use.”

“…Generalised water footprints are neither accurate nor helpful indicators for gaining a better understanding of water resource management.”

Dr Perry’s analysis would suggest that the source of the original 5000-20,000 litre claim is far from water-tight and one that should not stand alone as incontrovertible truth.

Research led by the University of NSW in 2010, funded by Meat & Livestock Australia, found that water used to produce red meat in southern Australia was 180–540 L/kg of hot standard carcase weight.

The study’s authors wrote: “We show that for media claims that tens or hundreds of thousands of litres of water are used in the production of red meat to be true, analysts have to ignore the environmental consequences of water use.”

Previous media articles have reported claims that it takes between 50,000 and 100,000 litres to produce a kilogram of red meat. But these reported measures count every single drop of water that falls on an area of land grazed by cattle over the space of a year. And they do not take into account the fact that most of the water ends up in waterways, is used by trees and plants and in pastures, not grazed by cattle. “These calculations therefore attribute all rain that falls on a property to beef production, whereby the water is clearly being used for other purposes, such as supporting ecosystems” MLA explains in its Target 100 page.

Not only do the claims of fake meat advocates about real meat appear to go largely unchallenged, there also appears to be a scarcity of questions asked the detail of processes used to actually produce lab grown meat, and to grow and distribute it large volumes. More media attention on the actual environmental impacts or water footprints of commercialising and mass-producing this ‘meat’ would add important perspective to the issue.