An Australian agricultural data analytics company says new AgTech tools will play a vital role in not only enhancing on farm decision making but also in providing the objective data the industry needs to defend itself from anti-farming activists. Phil Tickle co-founded Cibo Labs in 2018 as a data science company specialising in helping farmers make better use of new near-real-time satellite imagery, advanced analytics and their on-ground knowledge for a variety of applications.

The company has just launched a new service and App called MyFarmKey which enables farmers across the country to access and analyse 30 years of satellite imagery for their property, directly from their computer or mobile device within minutes for as little as $75.

They can create a unique digital farm record based on their individual land parcels, verify their data against LPA accreditation and land title, and generate auditable reports on trends in land condition indicators, including rainfall, seasonal groundcover and annual tree cover change.

The high resolution, high frequency property benchmarking maps are accessible through the MyFarmKey app which can serve a range of purposes including providing reports consistent with the Australian Beef Sustainability Framework Balance of Tree and Grass Cover Dashboard that was recently released. The reports can guide decisions on long term sustainable carrying capacity, support property valuations for the seller and the buyer based on objective information on land condition and productivity, and rapidly analyse whether a property may be suitable and eligible for a carbon, biodiversity or other ecosystem service project. 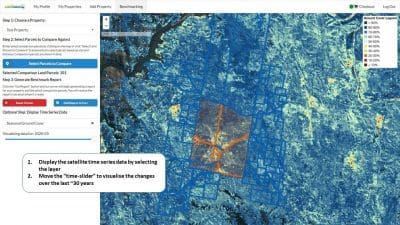 A current barrier to the uptake of a lot of ag tech innovation in Australia is the lack of accurate and consistent digital farm maps, Mr Tickle said.

Every property wanting to take advantage of the technologies will need a high quality digital farm map in future, he said, but most farms either do not have current mapping, and of those that do, there is a considerable variance in their quality and utility because of the methods used by different mapping software.

“It’s the rail gauge issue for AgTech that we have had to solve,” he said, referencing the problems that were caused in the 19th Century when each colony of Australia adopted their own railway guages instead of a single, standard system nationally.

The unique digital farm record created by MyFarmKey provides the starting point for AgTech systems to “talk to each other”, dramatically reducing onboarding costs and facilitating integration of specialist tools on behalf of the farmer.

The information provided through the ABSF Dashboard provides public access to the best available and national consistent data on tree and grass cover but does not allow you to zoom down to an individual property level. 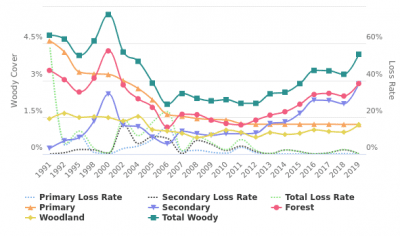 MyFarmKey enables producers to drill down to more detailed data about their own property that they can use to “tell their own story”.

There are more than 5.5 million individual parcels of land greater than one hectare in Australia (and ranging up to millions of hectares) and the tools developed provide access to 30 years of satellite data for every land parcel.

“All of the information presented via the ABSF Dashboard and MyFarmKey is publicly available information, but now every land owner in Australia has access to the information, and some simple tools to tell their own story, rather than having another organisation tell it form them,” Mr Tickle said

In response to concerns raised by some landholders that making this information more easily available plays into the hands of those wanting to close down animal agriculture, Mr Tickle said the opposite is the case.

“Digital mapping is a tool the industry needs to get on the front foot and tell the real story,” he said.

“It’s about openness and transparency for all the stakeholders across the value chain”.

“It shows land clearing has declined rapidly over the last 10 years, and it shows an increase in the extent and density of vegetation, not the large-scale removal of decades past. It also highlights to farmers that can improve their management of ground cover and vegetation.

“This is needed to help industry tell the full story”.

“It is saying here is the best available information provided in an open, objective and transparent environment – when groups talk about wholesale clearing, or widespread desertification this is a tool industry can use to provide the real facts and to work with stakeholders to identify opportunities for constantly improving sustainable landscape management and profitability. And if the information isn’t good enough let’s improve it.”