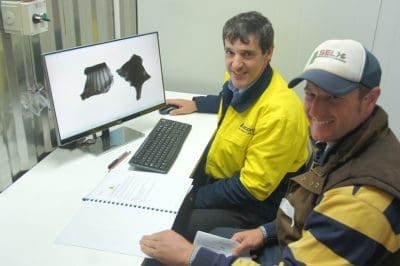 Once DEXA scanning commences, sometime after February Teys will then start making yield comparisons between DEXA’s estimates and physical bone-outs of at least a couple of hundred scanned carcases, to gauge the system’s predictive capacity, and helping validate the technology.

This will be a painstaking and costly process, likely to be carried out outside normal plant working hours, and effectively turning many of each carcase’s primal cuts into ‘mince.’

As part of the DEXA trial project at Lakes Creek, Teys also plans to benchmark the system’s yield prediction performance against a range of other emerging carcase yield assessment technologies.

These include a German-made E&V yield camera which promises to provide fast and accurate carcase yield assessment, without some of the cost and infrastructure downsides that DEXA presents.

One of DEXA’s drawbacks is that it takes up 60 square metres of space in the plant, and requires sophisticated protection systems to prevent human exposure to X-ray radiation. Some of the other yield technologies take up next to no space, and present nil human health risk.

Another yield system to be examined is a German fish-eye camera-based technology used to capture three-dimensional images, from which yield may be able to be calculated. The advantage of this system is that it is a relatively inexpensive piece of technology which does not require costly installation.

This work means that DEXA still has to ‘prove itself’ as the best available option, from a range of commercial perspectives, before it is adopted for wider installation. For example in some abattoir applications, it may be more cost-effective to install a much cheaper, simpler objective yield assessment system that delivers 80 percent accuracy in yield prediction, than installing a $2 million DEXA system that delivers 90pc accuracy, Beef Central was told.

Longer term, it is hoped that DEXA will also provide guidance over yields from individual cuts, as well as overall carcase yield.

Quality assesment, as well as yield

The data-set provided by the detailed bone-out work may also be used for comparison with live animal yield assessment technologies now starting to appear.

What this all means is that the Lakes Creek trial project originally directed at assessment of DEXA will now go well beyond scrutiny of this single technology, to a broader assessment of a range of yield and quality assessment tools that might have application in the Australian beef industry.

Technology company Scott is likely to hand-over the Lakes Creek DEXA system to Teys around the end of February with a working yield algorithm, for commercial trial carcase scanning work to start. Scott will continue to be involved in the trial process after that date.

Teys Australia is hoping to start providing ‘meaningful yield feedback’ from DEXA’s carcase readings to some Lakes Creek cattle suppliers by the Beef 2018 event in May, and the longer-term aim is to run every carcase passing through the plant through the DEXA scanner – potentially up to 1600 head per day, depending on this year’s cattle supply.

The Beef 2018 event in May will provide an opportunity to help start breaking-down some of the mysteries surrounding objective carcase assessment technology with producers.