No, that is not the Rocky Mountains in the background – it’s a silage stockpile on one of the 100,000 head feedlots visited during the recent Nutrien US beef tour

EXTREME drought conditions sweeping large parts of the United States have serious implications for the Australian beef industry for at least the next year, participants in a recently-returned Nutrien livestock staff tour of North America found.

The tour was put off for two years due to COVID, but landed in the US at a time of extreme distress for the North American cattle industry. 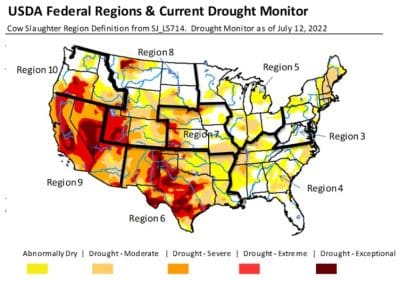 Source: Steiner. Click on image for a larger view

As this colour-gradient map indicates, producers across large areas of southern and western US – many of them key beef-producing regions – have run out, or are running out of feed and water and are having to liquidate big chunks of their herds.

While drought conditions observed in the areas visited by the tour group were described as ‘nothing like that experienced in Australia,’ there were large areas where corn crops had either failed, or were at the point of failure. Sale barn activity and the extent of cattle movements in general clearly indicated how severe the drought impact currently is on the US industry.

The key message to emerge out of the tour was that while the Australian industry is currently struggling against the sheer momentum in US beef being exported into international markets, that will change over time, as the US industry experiences the impact of significant herd decline due to drought liquidation. 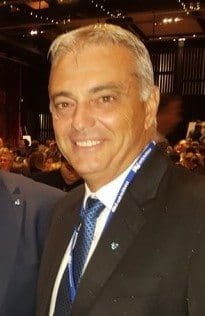 That cycle is likely to help underpin cattle prices in Australia in coming years.

“On top of the bog cow liquidation, there’s been a wave of light-weight, early calves come onto the market in the US in the past ten days,” Mr Giglia said.

“Some may go into feedlots, but the price of corn in the US is now rising (due to drought), and the fact those lighter cattle will have to be fed longer, will; add greater production cost. And added to that, the backgrounding segment of the US industry (typically carried out on dedicated grazing properties) did not have the forage this year to fill its function in the grainfed beef supply chain.

“There’s pressure coming to bear on the whole US supply chain, as a result. It won’t be this year that their meat production system is hurt, but next year, when the inevitable cattle shortage occurs,” Mr Giglia said.

“Many of the sale barns we visited are probably yarding another 50-60pc more cows than what they did earlier.”

“One would think that Australia still has some pain to get through this spring, due to the abundance of US beef on the market, but come autumn next year, we should start seeing some flow-on, based on what we’ve seen this month.”

Mr Giglia said the current circumstances in the US were similar to 2014-15, which itself was regarded as a severe drought episode in the US.

“It’s just another cycle, their second in the past decade,” he said.

US feedlots at record levels

June US feedlot turnoff (often called ‘marketings’ in the US industry) were the largest for the month in 11 years, records show. Cattle number son feed in July were reported at 11.332 million head, the second largest July figure ever recorded. The previous month was an all-time June record.

Beef Central’s US columnist Steve Kay, publisher of US Cattle Buyers’ Weekly, recently reported that more than 45pc of the contiguous US is currently in drought, with many parts of the Southwest experiencing severe, extreme or exceptional drought.

“No state has it worse than Texas,” Mr Kay reported. “Officials say 2022 is already one for the record books in Texas, with more than 80pc of the state facing drought conditions most of the year. Comparisons are already being made to the US drought of 2011, with some believing this year could eclipse 2011 as the state’s worst.”

Front-end US cattle supplies will fail to decline below year-earlier levels until at least the end of 2022, analyst Andrew Gottschalk from HedgersEdge.com told Cattle Buyers Weekly recently. The entire increase in harvest (up 159,000 head for the year to June) was the result of a sharp increase in US beef cow harvest, he said.

The USDA recently released its July Cattle Inventory report, showing the US herd (all adult cattle and calves at 98.8 million head, down 2pc on this time last year, and the lowest since 2015 when it was 98.1 million head. Total cows and heifers that have calved declined another 2pc year-on-year to 39.8 million head.

The reported calf crop of 34.6 million head (down 1.4pc) marked the smallest US calf crop since 2015, supporting the expectation of much tighter cattle supplies in coming years. “The tour was a great opportunity to get a deep immersion in the US beef industry, with some unique access to destinations like Tyson’s processing facilities that are normally very difficult to get into,” he said. 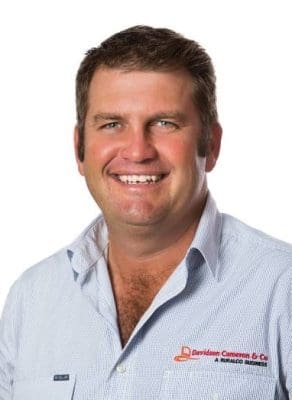 “At Tyson Foods, we saw 5000 carcases hanging in the chillers – all around 400kg and like peas in a pod,” Mr Scicluna said.

“It was clear that US lotfeeders are now getting offered cattle a lot lighter, because of the conditions,” he said. “It means lotfeeders are going to have to start them lighter, and feed them longer, at the same time that feedgrain prices are rising, due to the drought.”

“Stakeholders in the US are already starting to think about feeder cattle supply in coming years. In many ways, it’s similar to the dilemma that the Australian industry faced since our own 2019-20 drought, and sell-off,” he said.

“Yes, Australia is going through a bit of pain at the moment, with a cattle market that has come off. I know the FMD-factor is playing on some peoples’ minds, but I think most of that price adjustment is due to the mountain of US beef currently in the global market.”

“But once the US does get a break in its season, the tap gets turned off. It’s going to take six months, at least, after that happens, to get the current volume of meat through the system, but after that, it provides a real foundation for the cattle market in Australia – without a doubt.”

Mr Scicluna had not been to North America since he represented Australia in the International Young Auctioneer competition at Calgary in 1999.

‘Tsunami’ of US beef on world markets

He also noted the remarkable number of young calves going on feed in the US at present, some as low as 200kg, on grower rations. “In the short term, it is going to create a tsunami of good quality US grainfed beef on world markets, that is going to compete directly with Australian product,” Mr Gooden said.

“And it is very competitive. I noticed on one processing plant’s staff canteen notice board a reference to minimum wage of US $8.50 an hour. They have a huge advantage over us in labour cost, and when you combined that with a high quality, consistent grainfed product, which is increasingly in demand on the world stage, it is very hard for Australia to compete at present.”

“I think this will bring a lot of pressure to bear on key North Asian beef markets over the next 12 months.

“And on top of that, the US domestic beef market is experiencing a real shift in consumer focus away from steak cuts to burgers and ground beef, due to economic pressures. It leave more of the premium cuts for export into countries where the US competes head to head with Australia,” Mr Gooden said.

“Yes, Australia may ultimately get some competitive benefit from herd erosion in the US, but we’re not going to see the impact from that for 18 months to two years – and then, the question has to be asked, will we be in the position to exploit it, given the serious challenges in attracting labour in the Australian processing industry?” Tour group members in discussion with a US saleyards manager

Contrast on either side of the Pacific

On this side of the Pacific, the contrast in seasonal cycles is clearly evident.

Recently released data from ABS showed that as at 30 June 2021, Australia’s national beef herd grew by 4.3 percent or 906,000 head year-on-year to 22.04 million head (figure does not include dairy), as a sequence of better than average seasons across large parts of Australia fuels herd rebuilding, after our own severe drought during 2019-20.

Most significantly, the number of heifers and cows in the national herd grew by 6pc to 11.8 million. With the majority of these being breeding females, this demonstrates the strong herd rebuild decisions Australian producers made by retaining females.

This result also correlates to the falling female slaughter ratio (FSR) throughout the 2021 financial year (and still evident to some extent today) where producers held females back from processing.

Nowhere is the contrast in fortunes on either side of the Pacific more evident than in recent beef export performance out of Australia and the US. Australia and the US compete head-to-head in many premium beef markets, including Japan, Korea, and China.

In June, US beef export volumes weren’t far off double Australia’s tally of less than 80,000 tonnes.