The national roll-out of an electronic National Vendor Declaration (eNVD) system is closer following the recent completion of trials.

Meat & Livestock Australia is reviewing the outcomes of field tests which were designed to evaluate the eNVD system in commercial environments across a range of market segments, supply chains and operational scenarios.

The trials looked at the accuracy and effectiveness of the eNVD system and aimed to identify any refinements, fixes or enhancements required prior to its broader roll-out. 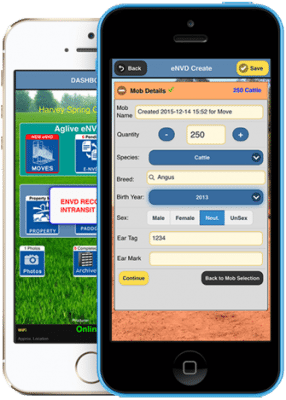 It is also considering a final report from AgLive, the creator of an App involved in the trials which is designed to allow producers to complete an NVD electronically on any smart phone, tablet or computer.

“We are in the process of reviewing field trial outcomes and will be providing SAFEMEAT with an update on the status of the field trials, including recommended next steps to support a broader roll-out of the eNVD system,” an MLA spokesperson told Beef Central.

Currently, the eNVD system is not available for commercial use beyond the eNVD field trials.

Based on the field trial outcomes, SAFEMEAT will make the final decisions regarding the roll-out of the eNVD system.

A national electronic NVD system is seen as offering several benefits to industry, including:

AgLive has been field trialing its eNVD app since December 2015. The trials have been based in Victoria and have involved 20 farming enterprises, 2 saleyards, 1 feedlotter and 2 abattoirs.

The company says that demonstrations of the app to several large corporate farming enterprises, agents and saleyards have already resulted in indicative orders, pending completion of the MLA trials and subsequent approval from SafeMeat Australia for eNVD’s to commence.

MLA said it has received a report from Aglive’s Electronic National Vendor Declaration (eNVD) app trial and is considering what recommendations to make.

“AgLive is one of several software companies that have recently partnered with MLA through the MLA Donor Company (MDC) as part of the electronic National Vendor Declaration (eNVD) field trial,” an MLA spokesperson said.

“The MDC has supported the commercial development of eNVD software in order to facilitate the field trialling of eNVD software through the red meat supply chain from producer to feedlot, saleyard and abattoir.

“The objective of the eNVD field trial is to assess the operation of the eNVD within the field, evaluate the system against the SAFEMEAT endorsed eNVD business rules and determine a roll-out strategy for the eNVD based on the lessons learned from the field trial.”