MAKING better use of dairy calves may be part of the answer in easing the beef industry’s current cattle supply dilemma, caused by drought-driven national herd retraction to 20-year lows. 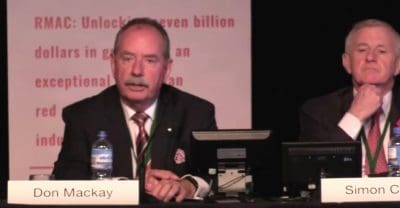 RMAC chairman Don Mackay was responding to a question from an MLA levy payer, who said having been involved in a dairy beef project a decade ago, he was ‘just staggered’, given the way cattle prices were, that the beef industry was not embracing dairy steer calves as a resource.

“One of the great frustrations I’ve had as a lotfeeder is the lack of recognition of utilisation of dairy calves as a feeder resource in this country,” Mr Mackay said, in agreement.

“It’s a disgrace, in my personal view. We clearly have to do something about it.”

In his capacity as RMAC chairman, Mr Mackay recently spent time with Dairy Australia on the subject of better utilising the industry’s bull calves.

“There are certainly some issues around feeding dairy cattle – they are more challenging to feed than beef animals.

“But I think this particular period (in terms of beef cattle supply) will see a re-emergence of Holstein feeding in Australia. It doesn’t make any sense to me that those animals are not fed for beef production,” Mr Mackay said.

“In the US, there is a very large industry dedicated to growing and lotfeeding Holstein dairy steer calves. We’re pushing hard with Dairy Australia, and will continue to do that,” he said.

“At Rangers Valley we produced about 2000 Wagyu x Holstein calves each year through alliances with dairy breeders. Stockyard, Security Foods and others have also done it.

“But whether it is straight Holsteins or F1s, with sexed semen and other tools, there’s a lot more than can be done in utilising this resource properly. If there is something to be done to achieve that within MLA, then I will certainly be talking with them about it,” Mr Mackay said.

In terms of performance in a feedyard, straight Holstein steer calves did not perform as well as conventional beef breeds. That meant that when the beef industry did not ‘need them’, their value could be quite low.

“But there are very large feedlots in the US – Harris Ranch in California is a good example – that permanently feed 80-90 percent Holsteins. There’s plenty of knowledge now about how to feed and grow them successfully.

Mr Mackay suggested Holstein feeders should be worth the same to a lotfeeder as a beef animal, less the performance compromise. “But they will marble, better than most beef breeds, and up to and including Angus-type performance,” he said.

Mr Mackay said there were some issues around muscle shape due to the Holstein animal’s conformation – striploins tended to be a little flatter, for example. But in terms of meat quality, US data suggested they certainly graded well.

One potential obstacle in Australia is the absence of a large, dedicated sector of dairy calf-rearers, as currently exists in the US. 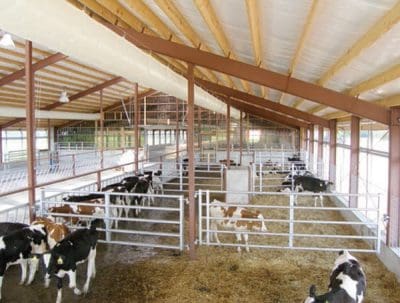 Dairy calf-rearing facility in the US

“Many of these US operations are highly-developed businesses. Some Californian calf-rearers run up to 10,000 calves at a time. There are calf-rearers around in Australia, but they are not set up to the same degree that they are in the US, but are on a much smaller scale,” he said.

There were a number of professional calf-rearers in areas like the NSW north coast, with air-conditioned sheds, and computerised feed systems – so it could be done.

Mr Mackay said in his view, a dairy beef program would only work if it was driven by commercial operators, who saw the opportunity, and could put together the supply chains, including calf-rearers, to make it work.

But what happens in three or four years, when the Australian beef herd is recovered from current herd size decline? Does the demand for Holstein feeders then disappear again?

“I don’t think that the difference in feedlot performance is enough that that Holstein calf market would simply disappear, if the industry got started,” he said.

“If we accept that we have now seen a significant change in the underlying value of all cattle in Australia, then the livestock industry simply can no longer afford to waste that potential feeder resource. It makes no sense,” he said.

“Secondly, I just don’t think that the broader community will be comfortable with wasting that resource. Technology is improving – sexed semen is being used for herd replacement for purebred Holstein females, and then using breeds like Wagyu over everything else, producing a market for their entire calf production.”

Mr Mackay said there was no question that the dairy industry itself was now very conscious of what ‘needed to happen’ in the management of bull calves.

“I just hope that somebody sees the opportunity,” he said.