NEW research by CSIRO has for the first time quantified the contribution Australian beef makes to the protein supply for human nutrition, paving the way to better understand efficiencies across production of other proteins.

The team used the emerging ‘net protein contribution’ concept to measure the quality and quantity of protein created by cattle compared to the protein they eat, looking at both grain-fed cattle and grass-fed cattle that may eat small amounts of grain.

It means the beef sector now has benchmark figures for the protein it contributes to the food supply, which will help track improvements and compare efficiency to other protein production systems when they are assessed using the method. 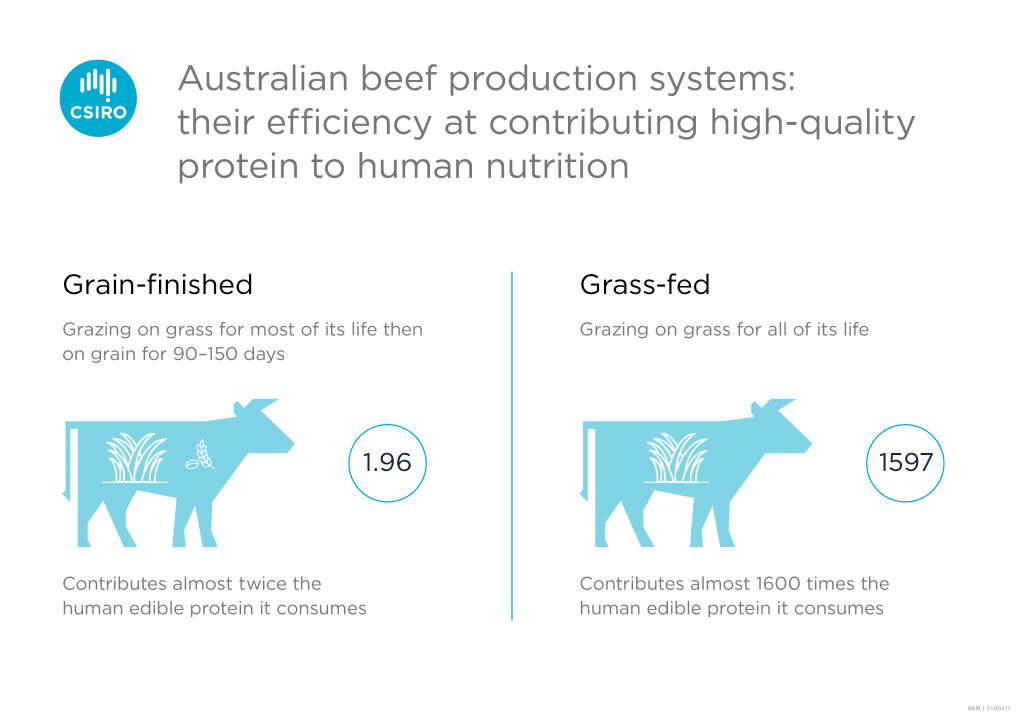 Red meat is often criticised as having a very large footprint, taking up land that could be used to grow crops for human food, or eating grain that humans could be eating instead, otherwise known as the ‘feed versus food debate’.

“Cattle are efficient up-cyclers of grass and other feedstuffs not just in terms of the quality of protein they create. They contribute a greater amount of protein to our food system than is used in their production as well,” Dr Thomas said.

The study, published in the journal Animal, is the first time the net protein contribution concept has been applied in Australia. It rated Australian grain-fed beef a score of 1.96 and grass-fed with a very small amount of grain a score of 1597, where a number greater than one means it has a positive contribution to meeting human nutritional requirements.

Dr Thomas said the rations now fed to cattle in Australian feedlots can be quite low in human-edible protein sources.

This research was undertaken as part of CSIRO’s Future Protein Mission, which aims to improve the productivity and sustainability of new and existing Australian protein industries through science, innovation and technology.

Future Protein Mission lead Professor Michelle Colgrave said that it was critical for Australia to obtain these benchmark figures for the beef supply chain.

“Research like this could help consumers assess their options in terms of what protein foods they choose in relation to sustainability,” Professor Colgrave said.

“It also could be yet another positive selling point for Australian beef in export markets.”