The strong result comes as a stark contrast with AA Co’s result announced last week, which showed an after-tax loss of $102.6m, burdened by poor operating performance at the company’s Livingstone beef abattoir near Darwin and other operational headwinds.

During the year JJAA Lampung was awarded Meat & Livestock Australia’s second annual Feedlot Steer Competition award for the feedlot’s efficiency of operations and management of cattle, for the second consecutive year.

CPC’s cattle brandings were up 10pc year-on-year, and as reported earlier on Beef Central, the company made property acquisitions including Emu’s Nest station to expand its Allawah stud capacity, providing additional scale to the genetics capabilities within the business.

“As a leading integrated beef and cattle supplier to international markets, we are well positioned to continue to benefit from the strong global demand for beef,” he said.

“Our JJAA joint venture in Indonesia continues to provide valuable direct access to the large and attractive Asian markets. We remain committed to our operations in Indonesia and this year we plan to increase our investment in the business,” Mr Setter said.

“After another solid year of investing in our properties, our cattle and our team, CPC is well positioned for the future,” he said.

Investment in provision of additional waters and fencing to spread grazing pressure and utilise pasture regions previously beyond reach of cattle is one of the big productivity drivers for CPC.

Since 2009, the company has developed more than 500,000ha of land through the addition of new bores, poly pipe and closed water tanks to add watering points, increasing carrying capacity by about 38,000 head. 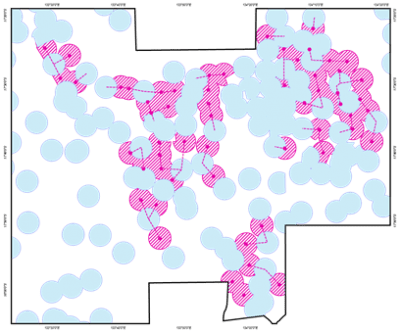 The map published here shows CPC’s Newcastle Waters group of stations, in the Barkly region of the Northern Territory, covering some 1.3 million ha.

“It’s a compelling return on investment. A typical investment of $1 million, for example, can drive value uplift of about $4 million after five years.”

“We still see significant opportunity to improve our productivity and increase carrying capacity with further development of our stations, through development of watering points and fencing, as well as technology and genetics.”

First round offers for the business are expected to be completed shortly, with a number of bidding ‘finalists’ to be shortlisted and provided with additional information.

The sale process could take up to a year, the market has been told.