Coolmunro overseer pictured with a team of four, planting in 1922

HUNDREDS of people from across the country will celebrate the centenary of the Trangie Agricultural Research Centre at the iconic 4000 hectare central-western NSW property on Valentine’s Day this Saturday (14 February).

“We are inviting people to share their memories and uncover some of the tales from Trangie’s past,” Dr Mortimer said.

“Back in 1915, the new farm’s first manager Richard Ament lived in a canvas and hay-bale house with his family. The major mode of transport was the horse and in the early 1920s trials compared horse-drawn ploughs with new motorised tractor technology.”

The original Trangie Experiment Farm was at the forefront of technological change which came to the district, driving the expansion of livestock and cropping industries.

“Today research at TARC continues to transform the way we live and farm,” Dr Mortimer said. 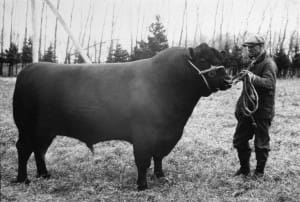 Current research owes much to the pioneers of the past, including sheep geneticist, Dr Fred Morley, who played a key role in expanding the Merino industry in western NSW.

According to former TARC research director, Don Saville, Dr Morley would work at night, at the Western Stores using their cash register to crunch numbers and analyse sheep statistics.

“Our researchers would board the overnight train to Sydney – they had to make sure all the figures were correct as they had only one chance with each data set before their return to Trangie the next day.”

“A mainframe computer, occupying an entire building, was installed to link Trangie with Sydney and when the manual telephone exchange operators tried to listen in, presumably to clicks and whirrs, the connection could not be made.”

Research and technology have come a long way since 1915 and DPI welcomes everyone to join in the centenary celebrations, which mark 100 years of dedication to agriculture and the rural community.