During the 1960s and 70s, the Top End had its own alternate currency, designed to circumvent liquor licensing laws. Meet the Stubloon

AFTER the Second World War, the cattle industry in Northern Australia was growing.

Transporting cattle from inaccessible regions to markets far away in the south meant days of driving on rough roads, and this took a toll on cattle condition and welfare, and the trucks themselves. 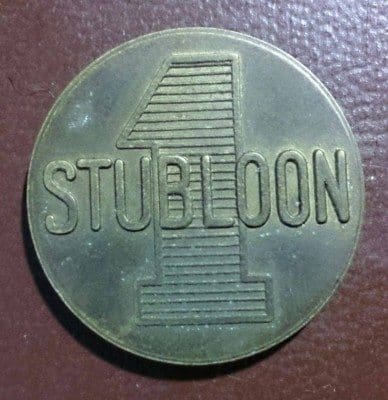 Beginning in 1960, and continuing through into the 1970s, a massive road construction program was undertaken in some of the remotest parts of outback Australia.

Over the years of construction thousands of workers lived in remote camps in the NT with few facilities.

Social clubs ran canteens for the workers, but liquor licensing laws meant that these canteens could not sell alcohol and thus a system of exchanging tickets and tokens for beer was used to get around the problem.

Project clerk Peter Snel later recounted the genesis of a new kind of token, the Stubloon: “No money could actually change hands at the camps under the liquor ordinance,” he recalled.

“At the beginning I tried introducing beer tickets and a variety of tokens. But these ideas weren’t satisfactory, so I had a long discussion with the regional engineer in Katherine, Don Darben, about an alternate currency based on the value of one stubby of beer.” 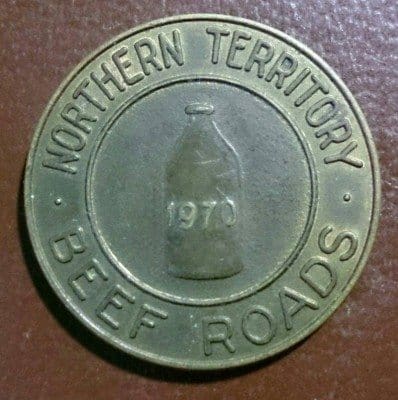 The result was the Stubloon, a word derived from the old Spanish coin the doubloon and, naturally, the good old Australian stubby.

In 1970 when the idea of a brass token for the Northern Territory communities was raised, a competition was held to design it. The winning design featured on one side the word STUBLOON superimposed over the numeral ‘1’, and on the other side was an image of a stubby bottle and the date 1970 in the centre, with the words NORTHERN TERRITORY BEEF ROADS around the circumference.

The token was slightly larger than a twenty-cent piece. The first Stubloons were manufactured in Adelaide, and between 1970 and 1973 some 4000 were produced.

In no time at all, the Stubloon was the only currency of any consequence in the road camps. It was even accepted by many pubs in the Territory

Immediately on its introduction, the Stubloon revolutionised social trade at the Territory’s road camps. Men cashed their pay cheques for the coins, which were pegged in value to the cost of a stubby of beer.

In no time at all, the Stubloon was the only currency of any consequence in the road camps. It was even accepted by many pubs in the Territory by cunning barmen who willingly gave away a 28-cent stubby for a coin they could sell to a tourist for as much as $1.50. (Australasian Post, 27 October 1983).

A truck-driver of the period remembers that it was common for workers ‘to ask for a number of Stubloon tokens to form part of their pay-packet each week’, and that they would ‘take these to their drinking hole and stack them on the bar to pay for their drinks during the night’ (D.R. Barrie, Brass for Beer, 2012). Other reports suggest they were used as gambling chips in casual poker games.

The road camps closed with the completion of the Beef Roads Program.

With the closure of the camps, Stubloons were no longer needed, although a number of similar tokens, called ‘The Territory Stubloon’, were issued as tourist souvenirs in 1982 by the Darwin Tourist Promotion Association.

They are significant relics of life in the Northern Territory during a period of economic expansion and opportunity.