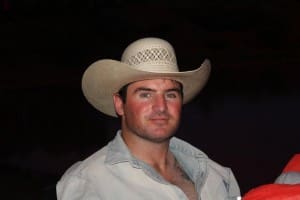 From a Nuffield Scholar, to becoming an author, Rob Cook has achieved plenty in the last couple of years.

Rob grew up in the Northern Territory on Suplejack Station, one of the country’s most remote  properties.

In his own words, Rob was ‘set up for life out there, I had a growing family and life on the land couldn’t get a great deal better’.

However, a helicopter crash on September 30, 2008, changed all that, with injuries sustained making him a C4 quadriplegic.

After a 12-month stay in an Adelaide hospital, Rob found himself back in the Northern Territory not really knowing what the next step was in life.

“I obviously spent plenty of time thinking of getting back to work and what could I do to become a productive member of the family business again, and I guess that’s where the idea of doing a Nuffield Farming Scholarship came from,” he explains.

Rob embarked on his scholarship in 2011, with an aim to find technology to help injured Australian farmers remain productive members of agricultural communities.

“Originally I was under the impression that given my quadriplegia, I would have to get a new job, and the biggest thing the Nuffield scholarship taught me was I just need to find a new way of doing my old job.

“So that’s what I based my study around – what sort of technology is out there and how can I adapt and implement it.

“The exciting part was seeing some of the challenges people are facing and conquered – it is possible, you’ve just got to stick to your guns and persevere,” Rob says.

After returning from his scholarship, Rob and his family made the decision to relocate from Suplejack to a cattle-grazing property near Bundaberg in order to better utilise some of the technology he found during his Nuffield travels.

“It got to the stage where to implement some of these things on Suplejack was just such a big capital outlay given the remoteness of the station and the vast areas I’d have to cover.o prove I can do these things, I had to do it on a smaller scale and so my little family moved over to our Queensland property in January 2014 so that we can do exactly that,” he says.

Rob certainly hasn’t wasted any time in working on some of the new technologies that will help him with his daily work.

“It goes from modified buggies so that I can actually drive an off-road 4WD vehicle around the farm independently, right through to remote cattle handling technologies such as a walk-over weighing system that gives you automated drafting as cattle come in to water, to just using some of the latest software packages to manage your herd.

“Something I’m also really passionate about is modifying cattle handling equipment such as hydraulic crushers so that I can actually operate the crush.

“We’ve built a set of cattle yards and now we’re at the stage where we can start automating some gates, either hydraulically or pneumatically so that I can actually work the cattle through the yards,” he says.

Along with Rob’s busy life on the land, he is also in demand as a guest speaker, and it was a common theme during question time after his speeches that was the genesis for his biography When the Dust Settles.

“A lot of people wanted to know how can this bloke in a wheelchair still have a bit of zest for life, and how can he see that the glass is half full as opposed to half empty, given the circumstances.

“People find it hard to understand how you can go from being an extremely active person, to being stuck in a wheelchair not being able to scratch your nose or give yourself a drink of water, and still want to go out and achieve things, so they wanted to know who’s behind the person sitting in the chair, and I guess that’s where the idea of the book came from.

“Basically Carl Curtain and I just picked out some highlights throughout my life and told a story about it – not an easy task, but it was enjoyable and I got to relive some great memories.

“To be able to re-tell those stories I guess it reminded me too of the important things in life, it was a great experience,” he says.

When the Dust Settles is available on-line in an electronic form through Amazon and iBooks as well as any of the big book stores including Dymocks and ABC shops and centres. For more information on Rob, head to www.robcook.com.au Rob’s Nuffield scholarship was supported by ANZ and the Northern Territory Department of Resources.

Nuffield Australia is an organisation which provides opportunities to Australian farmers between the ages of 28 and 40 to travel the globe investigating a research topic important to them and Australian agriculture.The scholarships, each worth $30 thousand, enable successful applicants to travel the world researching a topic of importance to them personally and to their broader industry. For more information visit www.nuffield.com.au