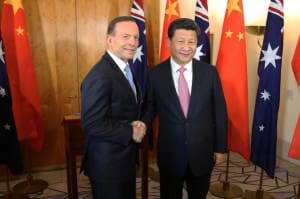 Australian Prime Minister Tony Abbott and President Xi Jinping at the signing of the ChAFTA in Canberra this afternoon.

The Australian red meat and livestock sectors will benefit by $11 billion from the elimination of tariffs negotiated under the China-Australia Free Trade Agreement (ChAFTA) announced by Australian Prime Minister Tony Abbott following his meeting with Chinese President Xi Jinping in Canberra today.

Once fully implemented an FTA with China has the potential to boost the gross value of beef production by $270 million annually by 2024. Out to 2030, the total benefits for beef will approach $3.3 billion.For the sheepmeat sector, the potential benefits are more than $150 million each year by 2024 – with the value over the next 16 years being in excess of $1.8 billion. 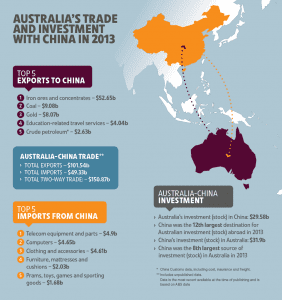 As China is a destination for nearly 90% of Australia’s sheepskin exports and 80% of cattle hides, elimination of these tariffs, as well as those on offal, will add $436 million a year by 2024 across both beef and sheepmeat – and out to 2030, these benefits could total $6 billion.“These ChAFTA benefits will add significant value to the Australian red meat and livestock industry and complement the gains derived from the other FTAs Australia has concluded to date,” Chairman of the Australian Red Meat ChAFTA Taskforce David Larkin said.“The current tariffs imposed on Australian beef, sheepmeat and co-products exported to China represent an annual tax on the supply chain of around $826 million. The gradual removal of this cost burden will positively impact the profitability of Australian cattle and sheep producers, processors and exporters, not to mention alleviation of the inflated prices paid for Australian red meat and associated products by Chinese customers and consumers.”The Australian red meat industry has been at a distinct competitive disadvantage in China given the very low tariffs that major competitor, New Zealand, has benefited from following the 2008 New Zealand-China FTA.“With New Zealand beef and sheepmeat gaining tariff free entry by 2016, it was vital that Australian red meat products were afforded similar (albeit lagging) access arrangements,” Mr Larkin said.“As competition in China is also likely to escalate over the next few years as other suppliers potentially obtain improved access, Australia’s competitiveness is under threat – a demonstrable reason why Australia urgently needed a trade liberalising agreement.“Few other initiatives pursued by the Australian Government could do more to improve supply chain returns than a true free trade agreement with China.”Mr Larkin thanked the Prime Minister, the Minister for Trade and Investment and his negotiating team for their efforts in what had been difficult and protracted negotiations.“Such an advantageous outcome will help to favourably position the Australian red meat and livestock sector for years to come. In so doing, the existing commercial relationships with China will ascend to the next level,” Mr Larkin said.