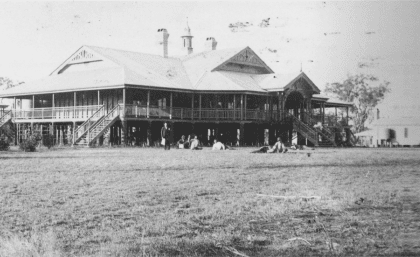 One of the oldest tertiary institutions in Queensland – now a national hub for agricultural teaching, research and innovation – is celebrating its 125th anniversary.

UQ Gatton was established as the Queensland Agricultural College (QAC) in 1897, was taken over by U-S Army during World War Two and amalgamated with The University of Queensland in 1990.

Professor Nigel Perkins from the UQ School of Veterinary Science said the long history of the campus means you can’t go far in regional Queensland without finding someone with a direct link to Gatton.

“They’d either been there or their sister or brother or friend had, or they knew someone who’d been there, or they had been there themselves and the connection is positive, at a level that just amazes me still today, Professor Perkins said.

“There’s a deep connection to that history of QAC.

“Because the bush population is so low and because there’s that shared connected – if you go to University of Sydney or University of Melbourne, then you think about the 100-year history, there is no great link between someone who studied history there 100 years go versus someone who studied economics or medicine – but all of the bush kids who went to QAC shared the same sort of history.”

Gatton’s long history is deeply valued by staff and students and kept alive by the Gatton Past Students Association (GPSA), which was set up in 1924.

President Mark Pace, a Gatton graduate and former staff member, who maintains his links with the School of Agriculture and Food Sciences, said the campus had extensive community links.

“You have to realise that that connection and linkage is intrinsic with the culture of the campus, and the reason it’s so active is that the campus had very much a community structure,” Mr Pace said.

“It was largely residential and there was also that strong connection between staff and students.

“For many of us in the association, the friends that you have in your life, there’s a good chance that they are connections that you made at the campus.”

UQ is marking the milestone by inviting Gatton campus alumni, current and past staff and the Gatton community back to campus for a series of events, including a long-table lunch on Saturday 2 July and activities for the whole family across the morning.

Professor Perkins said it was important to celebrate the 125-year legacy.

“It’s wonderful to be part of a university that has a global commitment to quality and all of the positive messages in a globally ranked and recognised university,” he said.

“It’s fascinating to be part of the growth of Gatton campus, to build connections locally, and to continue to be part of a university that is strongly committed to building Gatton campus as a flagship, as a global leader in ag science, animal science, horticulture, veterinary science, that is just stimulating.”