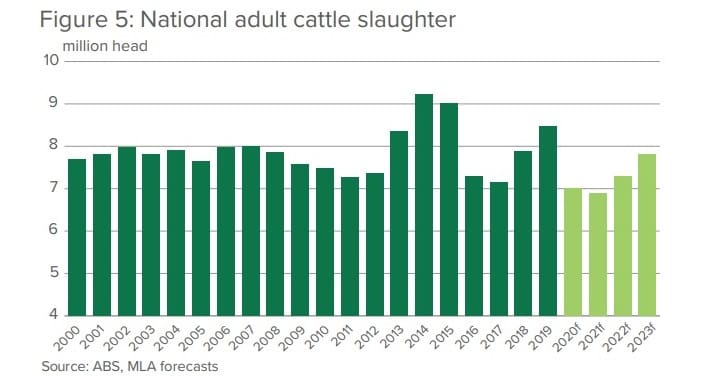 THE Australian cattle market finds itself in a unprecedented position, with many divergent factors impacting the industry in addition to COVID-19, according to Meat & Livestock Australia’s mid-year Cattle Industry Projections update released this morning.

Senior market analyst Adam Cheetham said on the back of an excellent autumn break for many southern cattle producing regions and the desire to rebuild, renewed optimism swept the domestic cattle market.  However, as COVID-19 outbreaks continue to disrupt the local and global marketplace, uncertainty remains.

From a cattle supply perspective, a contraction in the availability of livestock has occurred, however robust live export shipments and an only modest contraction in processor throughput for the year-to-May has resulted in a slight revision higher for cattle turnoff since the April projections update, Mr Cheetham said.

On the back a sharp decline in cattle turnoff, national beef production is forecast to decline by 14pc to 2.06 million tonnes carcase weight.

“Limited supply availability, in particular throughout winter, exacerbated by intense restocker activity in the store market and heightened stock retention, is expected to see national beef production track well below 2019 levels for the remainder of the year,” Mr Cheetham said.

A lift in average carcase weights, fuelled by improved seasonal conditions particularly in southern production regions, will help to offset some of the decline in slaughter.

“Greater feed availability, low stocking rates and historically high cattle prices should all combine to place producers in a position to feed for longer and to finish to heavier weights along with a growing portion of males in the total kill,” Mr Cheetham said.

In terms of cattle prices, a positive rainfall outlook continues to encourage producers, despite the unpredictable nature of COVID-19 in Australia’s key markets, he said. However, after posting records in June, cattle prices have started to soften and once spring hits, prices will likely come under further downward pressure, albeit remaining within a historically high range.

“On the back of an excellent autumn break for many southern cattle producers, opportunities to restock paddocks have emerged and this has been reflected in the number of cattle heading south.

“While central and southeast Queensland received a break, it came at the end of the northern wet season. Some good winter rainfall will be required to support deficiencies in the region and the latest three-month outlook does provide some confidence.”

It is likely a high number of females remained in feedlots during the first half of the year, underpinning the sustained high level of female turn-off. However, to some extent, the lift in the female portion of total slaughter has also been amplified by extremely low male turn-off numbers.

The limited availability of steers for finishing is highlighted in the male component of total slaughter for the year-to-May, with bulls, bullocks and steers totalling only 1.49 million head, the lowest level since 1987. A combination of drought-driven destocking, consecutive years of low branding rates and robust live export shipments have contributed to the decline in the number of male cattle on hand.

Mr Cheetham said the start of the herd rebuild is now anticipated to occur towards the end of 2020 as high female slaughter rates are expected to taper off.

“The Australian cattle herd is now expected to increase by 1.9pc in the year to 30 June 2021, climbing back to 25 million head,” he said.

Despite COVID-19 causing volatility in international markets, Australian beef exports are expected to exceed one million tonnes this year. Beef exports have been revised upwards from the April projections update and are now forecast to reach 1.02mt, down 17pc on 2019.

“The key drivers of this revision are the enduring international demand for safe, quality beef, bolstered by a general lift in the sale of beef through most retail channels and forecast higher domestic turn-off,” Mr Cheetham said.

“The continued protein shortage caused by African Swine Fever, especially in China and Vietnam, along with supply disruptions in the United States and a reasonably favourable Australian dollar, will also play a significant role.”