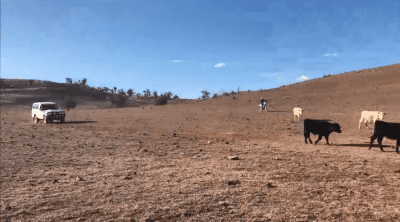 Police have seized 22 cattle from two properties in New South Wales and Queensland as part of an ongoing fraud investigation.

On the same day a simultaneous warrant was executed by the Queensland Police Major and Organised Crime Squad (Rural) at a property near Goondiwindi in Queensland.

Over three days the properties were mustered, with several hundred cattle examined by officers.

At the New South Wales property a further 12 cattle were returned to nearby property owners, and 65 cattle were recovered and trucked out by a financier.

No charges have been laid at this time and investigations by the New England Rural Crime Prevention Team are continuing.

“This is an example of bringing Rural Crime Investigators together across state boundaries. Criminals need to know that our capability to respond to these crimes is forever increasing and they need to change their ways or face the Courts.” Detective Inspector Whiteside said.