Cattle price rises a matter of when, not if, says MLA 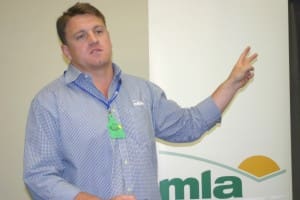 If history is anything to go by, some substantial rises in cattle prices lie ahead for Australian producers, and the question, perhaps, is more about when, rather than if.

Speaking at a risk management seminar in Brisbane yesterday convened by FC Stone International, Meat & Livestock Australia’s market information and analysis manager Tim McRae painted an optimistic picture for what lies ahead for cattle pricing – almost regardless of whether it rains or not.

His comments come ahead of MLA’s mid-year industry projections, due for release next week.

Mr McRae’s presentation yesterday attempted to put the past 24 months of extremely high slaughter into some perspective, reaching back into history to look for precedents that might give some indication of what lies ahead, pricewise.

Assuming some May and June slaughter figures, his projection works on a combined slaughter and live export figure for the past 24 months of about 18.316 million head.

Mr McRae then went back and compared that extraordinarily high percentage of slaughter (+15 percent on the previous 24 months) to earlier periods where there were similar sustained periods of high turnoff. Some of these included:

“The actual total increase in turnoff in that episode was very similar to what we have just experienced,” he said. “Live export numbers were 1.7 million for the period, again, very similar to the current event.”

The 1997-99 event also coincided with the longer-term reduction in the southern Australian beef herd, and the increase in the northern herd.

The difference this time is that the drought and high turnoff cycle is probably biting harder than it did back in 1997-99. Debt levels are higher while prices are low, and drought has been more extensive than it was back in the previous example, where it hit hard in southern Australia, but less so in the north. 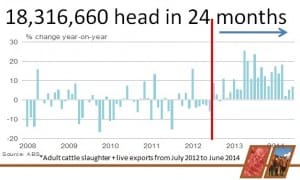 Asked how confident he could be that the cattle market would experience a 25pc rise, this time, as it did in the previous chosen example, Mr McRae made the point that the Australian dollar was worth only +US55c back then, and Australian was still selling around 350,000 tonnes of beef to the US each year.

“But the point is, the demand situation now has arguably never been better,” he said.

But a distinction this time is that since January last year, brandings have been very low, mortality rates have been high, slaughter numbers and live export numbers have gone through the roof.

“That means the actual number of cattle coming into the system is much less – perhaps 2.5 to 3 million less. Surely that has to bite, even with a mild wet season in the coming year,” Mr McRae said. 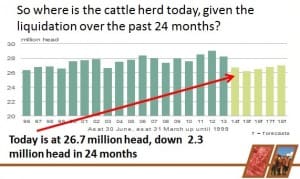 Whilst we can’t accurately forecast what prices are going to do, there is definitely a big shortage of cattle coming – it’s just a matter of when, not if.”

He said the catalyst could come from a number of areas. It could be an early start to the next wet season (hopefully El Nino does not kick in); it could be a great spring in the south; or it could be the US scenario, where the domestic beef supply chain has just effectively started to run out of livestock, pushing prices for cattle and beef to stratospheric levels.

“On top of that we have a demand situation where everyone around the world is looking for our product. With all those other influences on top, that price impact down the track looks very strong.”

“And we know the shortage of cattle is not just likely for the next 12 months, but for two or three years, as the impact of the drought is felt in conception rates.”

Asked about speculation that the Australian herd buildup over the two or three wet years was perhaps a lot higher than statistical data had indicated, and consequently lifted the industry’s ability to absorb such large recent kills, Mr McRae thought that might be overly optimistic.

“There’s always the old ten percent rule. It’s often said that there’s always 10pc more cattle than you think during a drought, and 10pc less when it’s been wet.”

“We can only go off what the ABS figures suggest, which had the herd at 29.2 million at June last year. Some people have said (as recently as yesterday’s risk management forum) that it could have been two million higher than that. But you only have to go back to 2011, when a lot of people were saying there were two million less than the forecasts.”

“We think it has a lot to do with what the sentiment is at the time. If I have a look at the percentages of slaughter, as a percentage of the opening herd, we would put the national herd as of June 30 this year at about 26.7 million head. That’s 2.5 million less than where we were 18 months ago, and a big impact on the female portion.”

It means the potential inflows of cattle coming into the system now is significantly reduced.

“We know there are less females, branding and conceptions are low, mortalities high, and a lot more have gone to live export and slaughter,” Mr McRae said.

He suggested the considerations surrounding herd buildup in 2010-11 – two of the wettest years on record – had perhaps got caught up a little with the fact that “it’s wet, wet, wet, so everyone is rebuilding,” – but perhaps lost sight a little of the fact that 2008 and 2009 were pretty bad branding years as well.

“Maybe those wet years and the rebuilding intentions actually masked, a little, the poor results from the previous two years. They were years when the national kill reached 7.4 million and 7.2 million, compared with the last fiscal year, ended last week, which reached 8.7 million.”

Mr McRae said this year, more than ever, the mid-year MLA industry projections would aim to take a “really good look” at the potential price impact over the next 12 months.

“Looking at Australian cattle prices over the long term, they follow US cattle prices, they follow 90CL grinding meat export prices, and they follow export meat prices to Japan. They have all kicked, and add to that the additional competitive element from China and emerging markets. Yet we’re out of kilter, lagging behind in our cattle price.

“Either those other indicators all come back, which looks highly unlikely, or Australian cattle prices go up, to move back to traditional patterns.”

Probably the only real negative is the A$, which sits uncomfortably high above US94c, he said.

“With the scenario covering supply and demand, if we follow the price trends in those other areas, we’re looking at some substantial rises, ahead.”

Weather still has a bearing

The caveat on all that is weather, of course.

“If we’d applied this scrutiny 12 months ago, we’d have been saying, ‘what’s the chances of getting two particularly bad seasons, back to back?’.”

“But as history has shown, it can happen.”

Mr McRae said the most palatable scenario for producers was some rain, which will inevitably tighten supplies and push prices up.

But even the less palatable result – another sub-optimal summer wet season – would still push prices upwards, only over a longer timeframe, as Australia entered a US-type scenario, where we start to run out of marketable cattle, and prices rise regardless.

That’s a longer term scenario, however, and one that has a much more detrimental effect on Australia’s ability to service global demand, longer term.