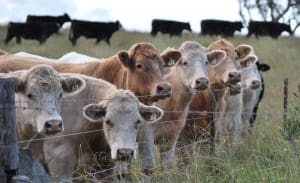 Biosecurity programs underpinning Australia’s multi-billion dollar beef industry are being run on the ‘smell of an oily rag’ according to one senior industry figure. Picture: Ken Hinze

Australian cattle industry leaders have been working to avert a potential crisis in biosecurity funding, amid warnings that grassfed cattle industry reserves held with Animal Health Australia (AHA) could be entirely exhausted within 12 months.

Recent negotiations have helped to move some of the financial burden on AHA for key biosecurity work to Meat & Livestock Australia which has eased the immediate threat facing the industry.

However industry leaders remain hopeful the Government will heed their calls for changes to legislation to make it easier for levy flows to be re-prioritised and re-apportoined as required between MLA, AHA and the National Residue Survey (NRS).

Under current arrangements revenue from the $5/head cattle transaction levy is distributed four ways: $3.60 goes to MLA for marketing, 92c goes to MLA for R&D, 29c goes to the NRS and 13c goes to AHA.

The 13c that goes to the AHA generates around $1.5 million in annual income,  which must be stretched across a range of important biosecurity functions such as funding FMD risk management programs, Johne’s research, the National Arbovirus Monitoring Program (ie for bluetongue and bovine ephemeral fever) and overseeing emergency animal disease response arrangements.

As the devastation that has followed other cattle industries around the world in the wake of Foot & Mouth Disease outbreaks has shown, funding for biosecurity protection and prevention programs is of vital importance.

Yet as one senior industry figure told Beef Central this week, the biosecurity programs underpinning Australia’s multi-billion dollar red meat industry are currently being run on “the smell of an oily rag”.

The CCA says changes to legislation to allow funds to be more easily re-prioritised are needed, a call that was a key plank of its recommendations to Senators during the recent grassfed beef levy inquiry.

Biosecurity issues have grown in prominence in recent years which has led to greater demands on AHA funding.

However, with its revenue base fixed at the 13c/hd levy rate, the industry has increasingly been required to draw on its grassfed cattle reserves in AHA to fund the additional programs required by industry.

At the same time State Governments have also been reducing their funding for important endemic disease programs and passing those costs back to industry, adding to the pressure on AHA’s budget.

The industry is now drawing an additional $650,000 out of reserves each year to fund biosecurity programs

As a consequence the industry is now drawing an additional $650,000 out of its grassfed cattle reserves each year to fund agreed biosecurity programs.

Warning of the significance of this issue at the Senate Inquiry in Canberra back in March, CCA CEO Jed Matz told Senators that grassfed cattle reserves in Animal Health Australia were set to be entirely exhausted by the end of 2015.

“We will have no way of [maintaining] our BJD programs, national arbovirus monitoring programs, our FMD risk process, our EADRA, all of our biosecurity functions, that Senator (Chris) Back mentioned were so important,” Mr Matz told the inquiry.

In order to avert the immediate threat, CCA has asked MLA to take over the funding of some AHA programs which fit with the R&D and market-access work traditionally funded by MLA.

For example MLA has agreed to CCA’s request to take over the funding of the annual $420,000 Johne’s Disease program, which involves research into faster and more accurate diagnostic tests, on-farm vaccines, and improved understanding of the JD virus.

CCA has also asked the MLA Donor Company to take over the $300,000 in annual funding AHA currently directs to surveillance for TSEs and the National Arbovirus Monitoring Program (NAMP), which it argues are effectively market access programs that are relevant to MLA’s marketing budget.

Whether MLA can find room in an already heavily-committed budget for the surveillance work remains to be seen but the request will be discussed at MLA’s next board meeting.

However if Cattle Council’s requests are met, it will relieve the industry’s funding commitments by $720,000 a year, which would off-set the $650,000 cost currently being incurred  and should return the grassfed cattle reserves in AHA to a slight surplus, for the moment at least.

Another point overlaying this issue is that several years ago, AHA received 20c/hd from the $5/hd grassfed levy. However, with grassfed cattle reserves in AHA at the time at relatively healthy levels, and levy revenue exceeding biosecurity program costs, the industry decided to reduce the grassfed levy component directed to AHA to just 13c/hd, with the balance being diverted to MLA for additional research and development. So there is an argument in some quarters that increasing AHA’s component of this levy would simply be to restore funding levels that were previously in place.

The issue serves to highlight the intransigence of the current levy flows, and the need for greater flexibility for industry to modify how the levy is apportioned as needs change.

“The issue of levy prioritisation is one which we hope will be addressed in the levy inquiry, (and) we look forward to seeing the report next month,” Mr Matz said this week.

“The issue of funds at AHA was identified long ago and we began a process of looking at projects we could legitimately move from AHA to MLA. This is a difficult and time-consuming process.

“This has now been done so the immediate threat has been eliminated, however, it highlights the long term need to more easily prioritise funds to the organisations that need them.”