CEO Margo Andrae said the development of the model delivered on a commitment made by Cattle Council at the 2017 AGM.

“The next steps for the draft constitution and concept model, post the AGM, will be to undertake further consultation with Cattle Council founding members and the broader industry, with the aim of holding a special AGM in the first half of 2019, where the final constitution will be presented to members for adoption.”

“This is an industry-owned model, driven by industry. It will deliver increased transparency, with a rigorous and diligent policy development structure which embraces grassroots input from producers. 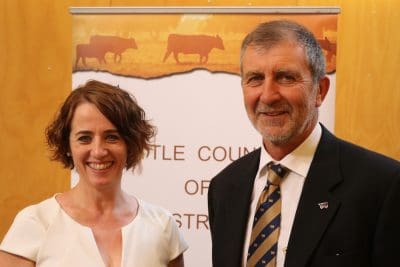 “As always, we strongly encourage cattle producers to be involved with their respective state-based representative organisations because it is a vital component of producer advocacy. And in keeping with our commitment to open consultation, we welcome the participation of the states in this process because they play such valuable role on behalf of producers.”

The new draft Board architecture delivers:

In a media release issued today Cattle Producers Australia (CPA) said a number of its committee members attended the CCA AGM yesterday to learn more about the CCA’s direct-elect model.

CPA chair Paul Wright said the model presented indicated that individual levy payers will vote for a traditional fiduciary board of directors who will have an oversight role, but policy will be developed and delivered by a series of consultative committees.

He said there was no confirmation that the members of these policy committees were to be democratically elected.

“The draft CCA proposal does not appear to satisfy the requirements of a truly democratic model for representation for grass-fed cattle levy payers. The CPA model does satisfy this criteria.”

Dr Wright said the representation of SFO’s and independents was not even in the proposed model. He said CCA Chair Howard Smith told the meeting the CCA relied heavily on SFO’s and their membership fees so they had a right to have members on the consultative committees.

He said he believed there were democratic discrepancies in the new CCA draft model because the direct elect board that comes from a levy payer vote does not actually appear to develop or deliver policy, they only oversee and endorse the policy created by the committees.

“This is a real concern for the industry, after all the senate inquiries and industry studies that have provided recommendations for reform, we are still being dealt a false sense of democracy by industry leaders.”

He said the Implementation Committee formed in response to the 2014 senate inquiry was established with members including CCA representatives and tasked with developing a new democratic model to replace CCA as the Peak Council to aid with launching reform in the industry.

Funding of $500,000 from the Leadership in Agriculture Fund was approved to fund the Implementation process in October 2017. This funding stream has been held in abeyance by the Department of Agriculture owing to the untimely withdrawal by the CCA from the reform process in January 2018.