Can history tell us anything about live export prospects to the US?

CONSIDER the following: A sixty-year low in the size of the US beef cattle herd, record high US feeder cattle and fed cattle prices, an A$ at five-year lows against the US currency, and Australian cattle values at the bottom of the pile, measured by international standards.

It’s a powerful formula which is again fuelling talk within the sector about the establishment a live cattle export trade out of Australia to the US. 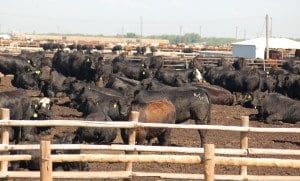 But as Beef Central can testify, there is nothing new in the concept of selling cattle live to the US.

Back in 2001 industry stakeholders in the US were eyeing-off the prospect of live cattle imports from Australia.

Paul Engler, the head of Cactus Feeders, then the largest privately owned lotfeeder in the US, was in Australia to speak at the grainfed industry’s BeefEx conference. He dropped a bombshell to this reporter when he said he was exploring prospects to import live Australian feeder cattle, saying he believed there was solid scope to develop a significant live export trade direct into the US.

It made compelling financial sense: at the time, the A$ was worth only around US52-55c – it’s lowest value since the currency was floated in 1983. That would give any prospective US feeder steer buyer enormous buying power in Australia.

Additionally, the US cattle herd was surprisingly low, at around 97.3 million head – not that far above where it sits today. MLA’s Ben Thomas told Beef Central this morning that Aussie trade steers in that era (mid-2001) averaged 185c/kg (liveweight), while the Chicago Mercantile Exchange feeder index in August 2001 was 375c/kg (liveweight) – twice the price. Both prices quoted are in Australian currency.

It’s not hard to see why large US feeder cattle users like Paul Engler got excited.

He said at that time that Cactus had been working ‘behind the scenes’ on developing the trade for the previous six months. He had “always been convinced that Australia produced quality feeder cattle cheaper than anyone else”, and with advanced shipping operations, it was an ideal time to capitalise on the opportunity.

His company, Cactus Feeders, planned to import its first 5000 head by December that year (2001). He said at the time he was waiting on the State-based Texas Animal Health Commission to provide details of specific risk assessment issues it wanted to follow through.

The shortage of good feeder cattle in the US was driving the interest in trying to import Australian cattle, Mr Engler said. In addition, he saw it as a way to support the concept of free trade.

“At the current exchange rate of US52c to the A$, even though Australian cattle are currently seeing record high prices, they still cost almost half what they do in the US,” he said at the time.

Based on the low price of feeder cattle in Australia, shipping expenses brought the total cost of importing the cattle to around US$70-75 per hundredweight, well below domestic prices at the time.

Cactus began exploring the possibility and made inquiries about what the USDA and the Australian government were doing to develop a protocol and approval process. “Our attitude from the beginning was that if the imports were permitted and the economics worked out favourably, we would view Australia the same as other exporting countries. We also believed that the burden was on the Australians and the shipping company to secure the necessary permits from the US government,” Mr Engler said.

In July 2001, the shipping company asked Cactus representatives to sign an application to import 4800 head of cattle from Australia during January 2002.

“We signed the application with the understanding that they would not submit the request until after the US government had officially approved imports of Australian cattle,” Mr Engler said.

Within days of making his comments in Australia, Mr Engler’s plans attracted vigorous criticism from US cattle lobby groups, ostensibly on animal health grounds, but widely interpreted in Australia as an intentional barrier to trade.

The US National Cattlemens Beef Association told US cattle market analyst Steve Kay – now a regular columnist for Beef Central – that while it was “obviously not thrilled” about the prospect of imports of feeder cattle from any new country, the association’s principal concern was that imports follow all health protocols and did not endanger the health of the US cattle herd.

Chief executive Chuck Schroeder said beyond that, the US was a free country in terms of the commerce that companies entered into.

Importing Australian feeder cattle would obviously be a political issue in the US industry, Mr Engler conceded.

“If I were a rancher in Montana, I would feel the same way some ranchers apparently do. But in a wider context, people have to look at what free trade is all about. What’s the difference between importing cattle from Mexico or Canada, or from Australia, provided any animal health issues are addressed?” he asked.

“If one considers globalisation and free trade, the US might import feeder cattle from many different sources in the future. The US imports more than 300,000 tonnes of beef from Australia each year, so why not import feeder cattle instead and add value to them in the US and generate revenue and jobs here?”

A phalanx of regulatory issues emerged that meant the proposal never got off the ground in 2001.

One was the use of private, versus limited government quarantine facilities. While Mr Engler said he was originally told that all of the protocols had been met and approved by the US government, USDA’s APHIS said that while import protocols had been drafted, final approval had never been granted.

“I think producers in the US are flabbergasted that it would be cost-effective to ship these animals 10,000 miles across the ocean. That they’re even contemplating it is amazing,” NCBA’s Chandler Keys said at the time. He said NCBA, like all of the parties involved, saw animal health is its top concern.

“We would hope the Australians would, too. These animals have never been exposed to any of our respiratory diseases, either,” he pointed out. “Those things need to be looked at.”

Some of the strongest objections come from Texas and Southwestern Cattle Raisers Association, which urged the USDA to use extreme caution when considering any request to import commercial feeder cattle from Australia. A major concern was the health and quarantine protocols that would be used.

“Obviously, there are diseases common to Australia which do not exist in the US. It is our understanding that an intermediate destination of such a shipment would be the Gulf coast of Texas, and that these cattle would be quarantined, transported, fed and processed in the state. Consequently, a vast quantity of the state’s 14 million head of cattle could potentially be exposed to diseases or vectors that do not exist in Texas, if the appropriate quarantine procedures are not implemented and strictly enforced.”

While the currency separation today is nowhere near as large as it was in 2001, the A$ is still at a five year low against the US greenback.

MLA’s Ben Thomas agrees that any current interest in establishing a live trade was likely to be built on contrasting feeder cattle price between the two countries , with currency a lesser consideration this time than in 2001.