Queensland farmers have been assured they will get the feed supplies they need despite a $250,000 fire at an Oakey hay storage facility.

It is business as usual for Feed Central which lost about 800 tonnes of cereal hay and straw in the blaze last Thursday, April 24. 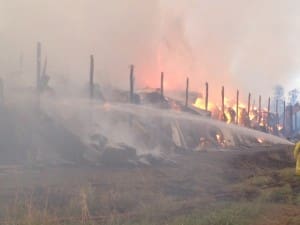 The shed fire at Oakey on April 24.

Managing Director Tim Ford said today that all hay destroyed in the fire had been sold to Feed Central’s long-term buyers.

“We do require replacement stock and will be actively buying this product over the coming days,” Mr Ford said. “We will be able to find suitable stocks and make sure the buyers are not left short.”

None of the burnt hay was scheduled to be moved to drought-affected properties. “Supply for these customers comes from alternative sources,” Mr Ford added.

All stock was fully insured and had been stored in facilities leased by Feed Central in Oakey.

Mr Ford said it was an old site that was being re-developed. “A small portion of the storage facilities were destroyed, but the majority of the site was left unaffected,” he said.

“While this was a serious fire, it was only a relatively small event in the overall scheme and size of the Feed Central business. It will not have any effect on the short or long-term viability of Feed Central and will have absolutely no impact on our ability to supply clients,” Mr Ford said.

Feed Central sells about 100,000 tonnes of feed each year and still has about 80, 000 tonne quality certified and ready to sell.

Mr Ford said there had been some incorrect social commentary claiming that the fire would impact on drought-affected farmers. “We can assure farmers and all our clients that it is business as usual. We have received some calls about supplies and also offers to help, which are greatly appreciated,” he said.

The equivalent of three Olympic sized pools was used to douse the fire which was brought under control relatively quickly and extinguished within 48 hours. No-one was injured in the blaze. A 14-year-old boy has been charged with deliberating lighting the fire.

“I was overseas at the time and took great comfort in knowing that the situation was being managed by the exceptional team behind Feed Central,” he added.

Feed Central provides hay and grain quality certification and marketing services to a national client base. The business is not connected in any way with Beef Central.