ESTIMATES of livestock losses caused by Eastern Australia’s December/January bushfires have been downgraded.

Speaking during a Global Agritrends meat trade webinar held this morning focussing on the recent China/US trade agreement, Australian analyst Simon Quilty provided a brief update on the drought and bushfire situation in Australia, and its likely future impact on beef and sheepmeat production and exports. 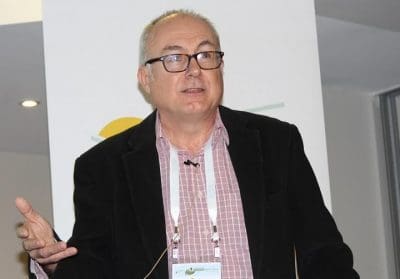 Dramatic scenes in international media coverage of recent bushfires may have created an impression in the overseas trade that stock losses were large enough to have a significant impact on Australia’s future red meat production. Some reports suggested ‘hundreds of thousands’ or even ‘millions’ of stock could be lost, due to fires.

Mr Quilty, a regular Beef Central contributor, told this morning’s webinar that latest estimates suggested that about 12.35 million hectares of land had been burnt-out by recent fires, but of that only about 15-20 percent, or 2.5 million hectares was considered pasture land. That represented about 0.7pc of Australia’s grazing land resources.

“In reality, stock losses, despite the area of land affected, have been minor,” he said.

As of Monday, estimates provide by state agriculture departments and other sources suggested just short of 69,000 head of sheep and cattle had been lost, across New South Wales, South Australia and Victoria.

Of that figure, Mr Quilty suggested only about 10pc (less than 7000 head) were cattle, with sheep making up the majority.

“The likely losses talked about earlier – potentially 2.1 million head of livestock in one report – is simply not going to occur,” he said.

Losses of sheep and cattle in New South Wales are currently reported at 13,500 head, and in Victoria, 5000 head.

Other states and territories, including Queensland, Western Australia, Tasmania and the Northern Territory have reported no significant deaths due to fires.

Big reductions ahead in exports

Aside from the recent impact of bushfires, Mr Quilty told this morning’s webinar that the pasture situation due to the drought across eastern Australia was “appalling.”

“Last year was the driest on record for Australia, over 120 years of data,” he said.

“That’s led to enormous liquidation of the female portion of the national beef herd. For ten months last year we killed in the 54-58pc range, for females as a percentage of overall kill. As a result, that will have an enormous impact on the size of the Australian herd, and our ability to re-build.

The consequences are that production in Australia is expected to fall dramatically this year, next year and for several years to follow.

Mr Quilty’s current estimate of the Australian herd size this year is 24.5 million head – “but to be honest, that could fall further, below 24 million,” he said.

The net effect is that the female portion of slaughter, measured between 2019 and 2021, could fall approximately 45pc.

“That’s enormous, but we cannot kill females at the rate Australia has been, without those consequences.”

Mr Quilty suggested male slaughter could fall around 15pc, giving a net estimate decline of 33pc across all beef slaughter in Australia. As a result, he has Australian export beef shipments this year falling 20pc, off last year’s figure of 1.18 million tonnes – the third highest on record. Total exports this year could be as low as 947,000t.

The only export destination likely to gain ground this year (and then, only marginally) is China.

China shipments this year could lift another 10pc, because of the ‘insatiable’ demand for all types of beef caused by the protein void driven by domestic pork shortage in China after the ASF disease outbreak.

In Japan, Australian exports could fall by 34pc this year, Korea could be down 30pc, and the US down 24pc, as Australian cattle supply dries up (see table below). “These are dramatic numbers, but they are also dramatic losses Australia has sustained to the herd through liquidation,” Mr Quilty said.

There was some hope, however, following widespread rain across eastern Australia, and more forecast for the next seven days in some areas.

* Editor’s note: The original version of this report said King Island, not Kangaroo Island – since corrected. Thanks to readers for picking up the mistake and bringing it to our attention!