Forged electronic eartags are believed to have been used in the theft of over $1 million worth of livestock in South East South Australia over the past five years. News Limited papers are reporting that livestock producers in Victoria and South Australia are helping police with their investigations into the thefts, which involve hundreds of cattle from various livestock producers. The investigation is believed to focus on a person who has worked for different companies within the industry in the past few years. Police are encouraging anyone with information about stock theft or criminal activity within rural communities to contact Crime Stoppers on 1800 333 000.

Drone to fly over farms and ‘ag-gag’ laws

An independent environmental journalist in the United States has used a crowd-funding website to raise $75,000 to buy camera-fitted aerial drones to spy on large livestock operations. According to US media reports, Washington-based blogger Will Potter says he believes the use of flying drones will allow him to get around the so-called “ag-gag” laws in several states which make it illegal for people to covertly videotape or record activity in intensive livestock farming operations. Harvest Public Media in Kansas reports that while the move has been lauded in some mainstream media articles, reaction to Potter’s plan in farm country has ranged from outright anger, invitations to visit the farms, and warnings about the drones becoming target practice. 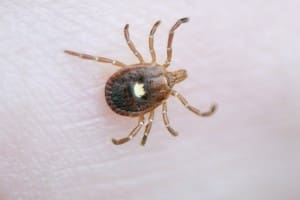 One of the more bizarre stories involving red meat this week involves a tiny tick that is reportedly causing the people it bites to become vegetarians by making them allergic to red meat. Fox News says doctors across the US are seeing an increasing number of meat allergies in people bitten by the “Lone Star” tick. The tiny tick carries ‘alpha-gal’, a sugar that humans don’t have but which is found in red meat. Reports suggest that alpha-gal triggers an immune-system response when the victim eats red meat, causing swelling, hives and loss of breath. Doctors don’t know if the allergy is permanent. Some patients show signs of declining antibodies over time. Long Island allergy specialist Dr Erin McGintee said she has seen nearly 200 cases in the last three years. “It is bizarre,” she said. “It goes against almost anything I’ve ever learned as an allergist,” because the symptoms can occur as long as eight hours after eating meat, rather than immediately, and the culprit is a sugar – a type of carbohydrate – whereas most food allergies are caused by proteins”.

Nominations are now open for RIRDC’s annual awards to recognise the commitment and innovation of women working to improve life in rural Australia. The 2015 RIRDC Rural Women’s Award acknowledges the contribution women make to primary industries and rural communities by providing financial assistance, mentoring, resources and support. Minister for Agriculture, Barnaby Joyce, is encouraging rural women either to nominate themselves or to nominate someone with a demonstrated commitment and vision for making a real difference to their industry and community. The awards provide emerging leaders with financial and professional support, access to a network of mentors and development opportunities. Finalists in the awards are selected based on both their commitment to rural Australia and a project or vision they want to implement that will benefit rural people, rural industries and communities. State and Territory winners receive a $10,000 grant to implement their Award vision and will have the opportunity to participate in the Company Directors Course run by the Australian Institute of Company Directors (AICD). A national winner and runner-up will be selected from the state winners with a further $10,000 bursary awarded to the winner and $5,000 to the runner-up to support their professional development and contribution to primary industries. Applications close on 31 October 2014. Application forms can be downloaded from the RIRDC website.

Taking a sickie is not an option for farmers. There is often no one to take their place, so farmers need to be fit and healthy to look after themselves and their farm. NSW Farmers’ Regional Service Manager Stuart Murdoch said the association’s exhibit at the AgQuip field days will include a “a one-stop fitness shop” which will include advice and tips on improving both physical and mental fitness. Farmers who visit NSW Farmers’ site can collect a free pedometer and a fortifying coffee with a prize pack for the farmer who walks the furthest each day at AgQuip. The Gunnedah field day runs from 19-21 August.

VFF forum to focus on Wycheproof saleyards and livestock biosecurity

Victorian livestock producers are invited to an open Victorian Farmers Federation forum at the Royal Mail Hotel, Wycheproof hear from speakers on issues ranging from Foot and Mouth Disease, the Pastoral Award to the Wycheproof Saleyards and North West Victoria biosecurity area. Chief Veterinary Officer of Victoria, Professor Charles Milne will reflect on his experience of managing outbreaks of foot and mouth disease (FMD) in the UK during his time as the Chief Veterinary Officer of Scotland. The event will also provide an opportunity for producers to hear from VFF Workplace Relations Senior Adviser, Rob Martin on the Pastoral Award and their obligations of employing staff. Buloke Councillor, Stuart McLean will provide an update on Wycheproof saleyards and the NWVSBP. The forum will take place at 6pm on September 1 for a 6:30pm start. The cost is $10 for VFF members and $20 for non-members. To RSVP by Friday, 25 August call VFF Membership Services on 1300 882 833

Farmers in the West will soon have access to further assistance to help them through drought, following agreement between the Australian and Western Australian governments. Australian Agriculture Minister, Barnaby Joyce said the rules around eligibility for the Drought Concessional Loans Scheme were now agreed and the focus had turned to getting in place the delivery arrangements to allow farm businesses to apply. Minister Joyce said $20 million would be available to Western Australia through the drought loan scheme to help farm businesses cope with prolonged dry conditions. “The loans will help those experiencing drought to restructure their existing business debt, access funds for operating expenses and/or undertake drought recovery activities.” The five year loans will fund up to 50 per cent of eligible farm business debt up to a maximum of $1 million at an initial concessional interest rate of four per cent. In addition to the drought concessional loans, the 2014-15 round of Farm Finance Concessional Loans Scheme is currently available to Western Australian farm businesses. For information, visit agric.wa.gov.au/rbdc or phone 1800 198 231. For further information on assistance available to farmers, visit daff.gov.au/assistance