Snap a feral, win a prize

Live cattle exports from Brazil have dropped by 75pc in the first half of this year, according to figures reported by the country’s foreign trade secretariat. Brazil exported 95,700 cattle from January to May 2015, the lowest number exported in the first five months of the year since 2007. Most cattle exports from Brazil originate from the northern cattle producing state of Pará. In the five months to May 2014, Para exported 362,800 cattle.

A key reported reason for the sharp decline has been a slowdown in purchases from Brazil’s main importer, Venezuela, due to the deterioration of the Venezuelan economy and accelerating inflation. Venezuela’s economy is heavily dependent on oil exports and failing international oil prices have led to a tightening of credit in the country. Brazil’s second biggest export customer, Lebanon, has also imported 54pc less cattle from Brazil so far this year than last year, in favour of cattle from Europe. The increasing price of cattle in Brazil are also said to have contributed to the decline in export sales. 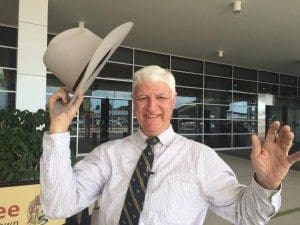 One of Akubra’s highest-profile supporters is threatening to boycott the famous brand in protest against the company’s decision to use only European rabbit skins to make its hats in future. Akubra has attributed the move in media statements to the rising cost of rabbit skins in Australia, and the difficulty in sourcing a reliability supply of Australian skins. Mr Katter said it was a sad reflection of how much is now being imported from overseas. “Akubra are saying they can’t find (enough rabbit fur)in Australia,” he said. “Well if you can’t find them in Australia, I’ll eat my hat. Rabbits are one of the worst things that ever happened in the Australian environment. They are extremely destructive creators of erosion. So we want them taken out and used for hats.” Mr Katter said he stopped eating Vegemite after its owner Kraft was sold to US interests, and now buys Dick Smith’s Ozemite. “Akubra is a great family, they are great people, they make a great product. We don’t want to change hat brands, but we are not going to be wearing hats made out of foreign product”.

The Missoulian newspaper in Montana wonders if this is a real life case of “All Hat, No Cattle”. 29 year old Andrew Jackson from Ronan in Montana recently pleaded guilty to selling $181,500 worth of cattle that never existed to two buyers. The victims were reportedly told by the defendant that he had purchased the cattle, but had also secured favorable pasture for them. “None of this was true,” said Lake County Attorney Steve Eschenbacher. “It was a ruse to enable the defendant to hold off the partners from seeing that none of the cattle had been purchased.” The crime was discovered when the buyers wanted to pick up the cattle and Mr Jackson’s attempts at stalling them failed. Mr Jackson said he had used the money to pay off other debts. He was on probation for a similar conviction involving a smaller amount of money when he was arrested. He will be sentenced on July 30.

A respected UK cattle farmer has been caught with £50,000 worth of cannabis growing in sheds, saying he resorted to drug production in a bid to keep his farm business afloat. 70 year old John Shears, a former National Farmers Union branch chairman, told police he hoped to be paid £3,000 a year in rent for the use of the shed and outbuildings by a cannabis grower – but lost money when crops failed. A police raid on his farm in Devon located 187 plants. Mr Shears said he agreed to allow the cannabis farm on his land after being approached by a man at a steeplechase meeting in 2011. The first crop that year was killed by frost, the second died because it was too hot, the third crop did not take and the fourth was the one seized by the police. Mr Shears told police he had been a ‘fool’ to get involved. His lawyer said his only role was as landlord, adding: ‘He has never been in trouble before and knows this was utterly foolish. It may be he had some financial difficulties with the farm, where he had a small beef herd. He hit on this crackpot scheme to get money to install cattle grids … This folly has damaged his reputation. He did not make any money.” Mr Shears was jailed for six months, suspended for 12 months, while the cannabis grower, Daniel Perryman, 26, Perryman was jailed for 20 months, suspended for two years.

Snap a feral, win a prize

The Invasive Animals Cooperative Research Centre is conducting its national Feral Photos competition for the fifth year. Budding photographers are being encouraged to capture photographic evidence of feral animals and the damage they cause. More than 1000 entries have been received in the four previous years of the competition, with 400 alone last year featuring everything from wild dogs, feral cats, foxes, rabbits, cane toads, myna birds, carp, camels and goats. There is a limit of five photo entries per person and the CRC says there are some great prizes on offer. The competition closes 30 September 2015. For more details click here.

NSW Premier Mike Baird will officially launch the NSW Farmers annual conference at Luna Park in Sydney next week, where grassroots members come together to develop policy for the next 12 months period. The two-day conference, will also feature Primary Industries and Lands and Water Minister Niall Blair, as well as the Director-General of the Department of Primary Industries Scott Hansen who will be part of a panel on the future of farming.

The inaugural two-day Australian Youth Ag Council is being held in Canberra on July 30-31. Hosted by the Future Farmer’s Network (FFN), the forum will tackle the three big issues identified in the network’s latest survey of its community of 18,000 people aged 18-35 working across Australia’s agriculture sector. The Youth Ag Council will be an open forum, taking input from young people involved in all aspects of agriculture across the country. The forum will involve live polling and facilitated discussions with industry experts. Speakers come from industry, politics and representative groups, and include Senator Richard Colbeck, Parliamentary Secretary for Agriculture; Joel Fitzgibbon MP, Shadow Minister for Agriculture; Lisa Chesters MP, Federal Member for Bendigo; David Krause, Chief Financial Officer of Kalfresh Vegetables; and Tony Maher, Deputy Chief Executive Officer of National Farmers Federation. It will also include workshops on advocacy, media and communications, a host of engaging speakers and plenty of networking. The outcomes will inform the Youth Ag Council Position Report, which will be taken directly to relevant parts of the Federal Government and form the basis of policy change conversations. For more information click here.

The Federal Government in partnership with the Queensland and NT Governments is undertaking feasibility studies on an upgrade of the freight railway line between Townsville and Mount Isa, and the construction of a new line between Mount Isa and Tennant Creek. The studies will consider the viability and economic opportunities created by a new transport link between Queensland and the Northern Territory. Minister for Infrastructure and Regional Development Warren Truss outlined the plan in Mount Isa earlier this week. “These two rail lines have the potential to improve access to global markets for local producers and deliver economic growth to the entire region,” Mr Truss said. “Rail remains a key transport mode for getting bulk goods to market, and conducting a Mount Isa-Tennant Creek feasibility study will help determine the best transport links to support business owners and residents between those two centres.”