AUSTRALIA may be producing some of the best beef genetics but trade barriers masking as biosecurity protocols are preventing their wider use across the world. 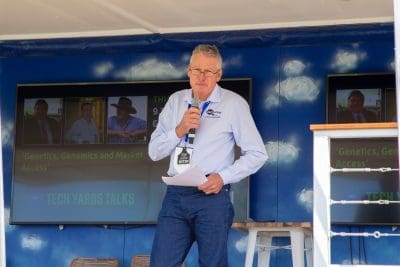 “It is fair to say that many Australian breeders are amongst the world leaders when it comes to adopting advanced genetic technologies like genomics,” Mr Wise said.

“They have extensive enough herds to select animals within those herds from a wide variation in environmental conditions.

“We should have the potential to play a major role in the world-wide trade of bovine genetics but demonstrably, this is not so.”

Mr Wise said over the four-year period from 2016-2019, Australia exported about 500,000 units of bovine genetic material of which 3500 were embryos and the rest semen.

“By my own estimates, this works out at $9 million to $14 million of trade per year, of which semen accounted for $5 million to$9 million,” he said.

“By contrast, the United Nations reported $575 million in trade worldwide in bovine semen alone in 2018.

“I know this includes beef and dairy semen, but it emphasises the size of the market in the world and the miniscule role Australia plays in it.”

He cited another report in 2018 which looked at imports of semen into Brazil, Argentina, Uruguay and Paraguay, with those four countries importing $60 million in semen in that year alone.

Of this, 60 per cent came from the US, 20 per cent from Canada and the remainder from other countries.

Mr Wise said global trade in genetics was important because it gave cattle breeders around the world access to the greatest population possible.

“The bigger the population, the greater the selection intensity you can put on your head and the greater genetic gain as a result,” he said.

But Mr Wise said the requirement of some countries for additional protocols for Australian export of genetic material was hindering trade.

He acknowledged the OIE guidelines were workable and “based on sound science and are mostly practical and they are mostly without ambiguity”.

“If those OIE guidelines were applied across the board for all countries, the international trade in bovine genetics would go through the roof tomorrow,” he said.

“But as it stands, almost every country has its own protocol so what they say is you can export to us or we can import to you, but you must have the OIE guidelines as the base, then we add other tests.

“Every country is different, and each has its own set of protocols we must abide by and in my opinion, most of those additional tests above what OIE ask us to do are not based on sound science.

“They are really just trade barriers dressed up as biosecurity and I think that is a bad deal.

“It demeans the seriousness of biosecurity but to dress it up like this with the additional requirements downgrades the meaning of biosecurity and also adds hugely to the cost of the product.”

Mr Wise said the frustrating part for Australian exporters of genetics was that it was not the same for all countries.

“I know that there are some of the bigger exporting countries that have been able to negotiate a one size fits all type protocol,” he said.

“They have developed their own protocol that they think guarantees no biosecurity risk and they have been able to sell it to other countries and have one single protocol to work to for every export they make.

“Whether they have been able to do this because they have more trade clout or better or more forceful government or industry advocates, or they are just plain better negotiators, I do not know.

“What I do know is as it stands right now, Australia and all other smaller exporting countries like us have to comply with different protocols for every different country and that is definitely confusing and definitely adds cost to our product.”

In practical terms, it meant that any Australian exporter had to nominate the country they are going to send genetic material to before they do the collections.

“While you might have a champion bull and bring him into the centre and want to collect him for everywhere, it is prohibitively expensive to do so, Mr Wise said.

“This is the reason there is no Australian exporter or breeder that has a store of genetic material collected and ready to go.”