THE Federal Government’s says its move to ensure full cost recovery for regulation of the live export industry may not mean a net increase in cost to operate for exporters.

The Department of Agriculture outlined a range of efficiency measures at Beef 2021 which it hopes will offset the withdrawal of federal financial support for regulation.

In the next financial year, the live export industry will be expected to pay about 60 percent of the cost of regulation, about 80 percent the following year and 100 percent the year after that.

The live export industry has been concerned about proposed fee hikes for regulation, with early projections for full cost recovery including a spike from $25,000 to $106,000 for an export license, and inspection fees rising from $55 per 15 minutes to $235 per 15 minutes, or $940/hour.

The Federal Government has been downplaying the impact of the increased fees since it released its first Cost Recovery Impact Statement in January. 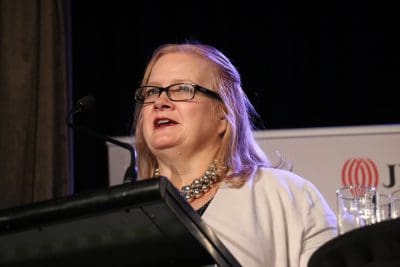 DAWE principal regulatory officer Dr Melissa McEwen said the federal government had committed to funding the difference in costs as its financial support is gradually withdrawn.

She said the cost of regulation of the live animal export arrangements in 2021/22 would be about $22 million.

“It’s worth pointing out that arrangement ($22 million) as a whole is not just livestock by sea or by sea and air – it is also other live animal exports and genetic material,” Dr McEwen said.

“There has been some discussion in the media that has suggested $22 million covers 243 shipments of livestock by sea – that’s not entirely true.

“It covers that and another 250 exports by air and over 9000 exports of other cats, dogs, cattle, fish, day old chicks etcetera.”

Dr McEwen said the department had done modelling on what costs would look like as the industry moved to full cost recovery for regulation.

She said without any improvements in efficiency, live export regulation costs would see fees increasing.

“Costs will increase, but it will not be as drastic as some commentators have suggested,” Dr McEwen said.

The department’s modelling showed key voyages heading to Indonesia and Vietnam would require exporters to pay about $4-$5/head next financial year, rising to $7-$8/head in 2024/25.

“I say that this is what it could look like, because that is where we might go if there is no success in streamlining our regulation and changing our costs and keeping them lower,” she said.

“By the time full cost recovery comes into effect, we will be more efficient.”

But Dr McEwen said any changes to improve efficiency would not be at the cost of animal welfare.

“We are looking for better systems, better thinking, better processes and more consistency,” she said.

“We are hoping we will have a much more streamlined regulatory system that still delivers the same outcomes. The key thing for us is that we are not dropping the bar on animal welfare or requirements for importing countries. Those things are critically important and will remain.”

“What we are doing is saying let’s be more flexible about how we ensure we are meeting those outcomes.”

Dr McEwen would not be drawn on what she believed the cost of export regulation would be when the industry footed 100 percent of the cost.

“We haven’t actually set ourselves a target yet,” she said.

“I was talking to exporters in the Northern Territory last week and it was suggested that if we could keep it around where we are now next year, which is probably around the $4/head mark, then that would be much better.

“And if we could get it lower, that would be good (but) I’m not going to stand up and make up a number.”

Dr McEwen said the department was committed to driving down the costs of regulation.

“I already know all that reform work over past couple of years and are doing in the next year or so, that will come to a natural end and those costs will start to come out of the system,” she said.

A new Cost Recovery Implementation statement for live animal exports will be released next week. It will be open for consultation for a short time before regulation fees are put in place in July.