SOME rediscovered varieties of stylosanthes are showing promise as boosters of pasture productivity in the lighter soils and frosty sub-tropics of Queensland.

They have been identified through eight years of Queensland Department of Agriculture and Fisheries research supported by Meat & Livestock Australia, and the five top performers are now close to commercialisation.

Speaking last week in the New legumes for grass-fed beef production session at Beef 2021, QDAF senior research scientist southern pastures Gavin Peck (pictured above) said they could be significant for up to 44 million hectares in Queensland alone.

Mr Peck said finding a pasture legume for southern inland Queensland has been “a real challenge”.

“In effect, we’ve tried to get tropical legumes and see how far south we can grow them,” Mr Peck said.

“In the other direction, we’ve taken temperate legumes and seen how far north we can take them, but generally our winter rainfall is not reliable enough.”

While some years have produced good results, frosts, the lack of intense summer rainfall, and drought have stymied growth of pasture legumes in southern Queensland, particularly its light country.

“For summer growing, we’ve really had none that have been persistent and productive.”

Revisiting 44 old pasture-evaluation sites was the vital step forward. At five sites, the southernmost at Millmerran, 40 lines had survived despite some tough seasons and periods of extreme grazing pressure. These have now been evaluated.

“It really was a case of establishing fences around old trial sites and praying for rain.

“We think we’ve identified some pretty good lines of stylo that are outperforming commercial varieties.”

“They are producing high levels of dry matter.”

Mr Peck said the varieties have been performing well on loamy and sandy country where few other options exist.

Sites where the new stylos could increase productivity cover the Queensland brigalow belt which stretches from the Great Dividing Range almost to Charleville, and includes St George in the south-west.

Mr Peck said graziers wishing to establish pasture legumes in southern Queensland needed to think of themselves as farmers in order to get plantings established on some stored soil moisture, and with weed control.

“If we don’t, we end up with failures.

“Establishment is a challenge, and it’s the most common reason for legumes failing in the subtropics.”

“It is critical to get decent establishment because that thickening up happens slower than it does in more reliable or summer rainfall areas.”

He said the stylo varieties which look likely to be released in the new future cannot be assured of gaining traction across southern Queensland without widespread support from the seed company, grazier groups, and research organisations.

Mr Cox has been involved in research aimed at showing how existing varieties can be more productive where they are grown, and finding new varieties and fertilising strategies to fill the dry-season feed gap.

“Some key zones have few or no options.”

Mr Cox said these included low-rainfall zones and those with clay soils, and decreasing amounts and reliability of rainfall added to the challenge on top of the normal dry season.

There is little to no rainfall in July to November in most years.” Kendrick Cox was one of three presenters in QDAF’s pasture legumes session at Beef 2021.

Research has shown that legume-based pastures can provide high-quality feed in the first half of the dry season in regions as far south as central Queensland.

In production paddocks of 500-1000ha, legumes have achieved dry-matter yields of mostly around 2-8t/ha in normal conditions, with feed value high in February and declining in the middle of the year.

As with Queensland’s south, stylos have been strong performers in trials to date on lighter country.

“They’ve been a huge success.”

On heavy clay country, desmanthus and butterfly pea have produced the best results. 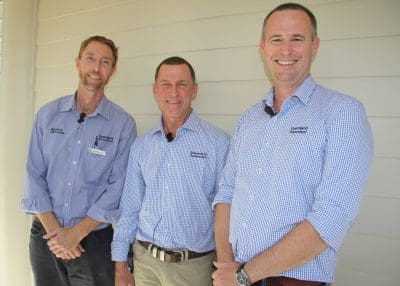 The project is now in its second phase, and testing combinations of grasses and legumes, with four sites planted since 2019.

Whitewater Station at Mt Surprise in the Gulf Savannah region is hosting trials sown in February 2019, and legume yields have ranged from 1-7t/ha.

“We’re reaching the stage where most pastures and legumes are commercially available, or close to it.”

In the tropics, leucaena remains an attractive option for some, and QDAF Mareeba-based research officer Craig Lemin said a new psyllid-resistant line called Redlands has been a welcome addition.

“It has opened up areas in North Queensland that have not been previously suited to leucaena,” Mr Lemin said.

QDAF data shows that in 2019, less than 2500ha was planted to leucaena, with half attributed to just two properties.

“Psyllids can really knock around your productivity. That’s been a handbrake on leucaena adoption.”

Mr Liman said the limited ability of the north’s light soils to hold moisture had also restricted uptake as opposed to parts of central Queensland with heavier soils.

Redlands was bred in a program involving MLA and the University of Queensland.

Trials at Pinnarendi on the Atherton Tablelands have shown it has performed just as well as Wondergraze, a comparable commercial variety without psyllid resistance.

“We found that under light grazing, cattle had a preference for psyllid-resistant lines.”

The Pinnarendi site receives an average of 775mm of annual average rainfall, three-quarters of it from December to March, with some frost and psyllid risk.

Mr Lemin said about 1100ha looks set to be planted this year in the north, but has limited upside on the coast between Cairns and Ingham, where high-value horticulture is competing for cattle area.

In sub-coastal areas including the Atherton Tablelands, productive grass-legume pastures have seen cattle gain up to 250 kilograms per year, or 0.6kg per day over 340 days.

He said paddocks adjacent to inland river systems could also be suited to leucaena.

“If you haven’t got any of those three things going for you, I probably wouldn’t think about planting leucaena.”