LARGE lifts in fertility in northern Australian beef herds could be achieved thanks to a COVID-style rapid genomic test. 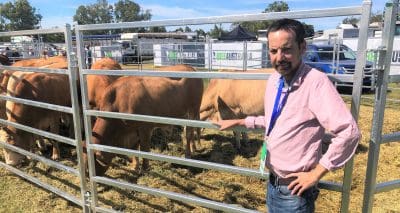 In a major step forward, researchers have found a way to cut the time taken for genomic feedback from up to eight weeks to less than 20 minutes.

Professor Ben Hayes from the Queensland Alliance for Agriculture and Food Innovation said the test, which would allow producers to know the fertility of young females within 20 minutes, should be available within two years and was a practical application of the technology.

Dr Hayes has been working with a team on using genomics to boost the fertility of northern beef herds, and while genomic testing was seen as a key, the time taken to get results back from tail hair samples meant it was impractical for some producers.

He said he wanted to make the genomic breeding values more user friendly.

“At the moment is you pull a tail hair, you put it in a little bag with ID very carefully written on it and you send it away to the lab and get your genomic breeding values back on the animals maybe six to eight weeks later,” Dr Hayes said.

But he said it would be more useful if those results were available as the animals were coming through the crush, especially if producers were only mustering once a year or twice a year.

The current test would require producers to muster cattle twice within eight weeks – once to test and then again to draft based on the test results – which was costly and impractical for some northern operators.

“What we are trying to do is work with the technology that was developed to screen people for COVID for very rapid COVID testing,” Dr Hayes said.

“You can use the same technology to sequence the cattle very, very quickly beside the crush and get that decision back to you on your laptop not instantly but within 15-20 minutes.

“It will mean you can make the decision while the animals are with you in the yards.”

The test uses a small sequencer which plugs into a laptop and is still being developed.

“We are not there yet but we have got the crush side testing to the point to where we can generate genomic breeding values,” Dr Hayes said.

“These predictions of breeding of things like fertility and temperament will be just as good as from a SNP chip or as good as you get from sending it to a lab,” Dr Hayes said.

“It’s probably two years until we can roll this out and we have a bit of work to do before we can get it out on farm.” The rapid test will build on the work Dr Hayes has done to develop genomic tests for female fertility in northern beef herds.

Fertility levels have a substantial effect on a business and its profitability and have been the focus of Dr Hayes and his team in a major project spanning several years.

It has involved colleting ultrasound information from 30,000 heifers across 54 herds and production systems which are purebred, crossbred and composite.

Heifers were ultrasound scanned at 600 days. This age was chosen as it is when most herds had about 50 per cent of heifers cycling and allowed genetic variation around puberty to be revealed.

“Traditionally, fertility has been a fairly challenging trait to change,” Dr Hayes said.

“What we’d like is selecting for heifers which go through puberty earlier, so they are definitely cycling when the bulls go in and are more likely to get pregnant,” Dr Hayes said.

“There is a huge variation when you go into any herd as to whether the heifers are cycling or not and that’s part of what drives pregnancy rates.”

In the project, heifers were followed through to their first pregnancy diagnosis and then for the rebreed.

“The rebreed is another really critical factor and it sets up lifetime productivity of the animal,” Dr Hayes said.

“When you pull a tail hair, you will be able to get predictions for heifer puberty, rebreed and a number of other traits like temperament, tick resistance and the like.”

“With the collaborators, we have turned the DNA marker data and the trait data into genomic breeding values so predictions of how the animals are going to perform for these traits.”

Dr Hayes said next stage of the project was to improve the accuracy of breeding values, with the higher the accuracy for predicting fertility, the more useful the genomic tests.