THE inclusion of detailed animal health performance data is the next big step in provision of livestock feedback information to beef producers, a seminar audience at Beef 2021 in Rockhampton heard.

JBS Australia, along with other large processors including Teys Australia, are rapidly developing more advanced feedback systems including animal health data, with plans to launch some programs later this year.

JBS Northern industry stakeholder manager Michael Finucan provided a snapshot of his company’s pilot project to develop an advanced Producer Portal, including animal health feedback, during the seminar (details below).

“It is the data which comes out of new industry carcase measurement and other technologies which make it come alive, allowing the industry to extract real benefit,” she said.

Some of these developments were potential ‘game changers’ for the way the industry operates, through increasing productivity, profitability or supply chain issues like better predicting slaughter capacity.

Effectively managing these rapidly expanding streams of data being generated across the supply chain, and getting that feedback to producers was a massive responsibility and challenge, Dr Weatherley said.

Through Livestock Data Link (LDL), at a processor level, research conducted on four significant markets indicated that the Australian beef industry was currently losing up to $163 million each year by producing cattle that did not meet customer requirements. That included the loss value attributed to issues like carcase downgrades, carcase condemnations, the loss of meat and offal value and animal health and disease issues.

Through LDL reporting, producers will soon start receiving information on non-compliance for each trait, delivering an opportunity cost of each, calculated on the discounts that would be applied for falling outside the ‘sweet-spot.’

One of the new metrics now being captured in greater volume is animal health data and offal performance.

A number of case-study pilots are being conducted with processors and their suppliers, capturing disease records on a range of common diseases including conditions like liver abscess, hydatids, fluke and lung condition on about 550,000 head of slaughter cattle so far, and accessible via Livestock Datalink.

Parallels could also be found between a disease, and its impact on weightgain performance or meat quality in a carcase.   For example an animal showing signs of lung damage or liver abscess may be below average for carcase weight within his group, or sub-optimal on fat cover.

“Giving producers this kind of feedback, is a central component to really helping refine management. They may be able to do something about the issue in animal health management among other affected animals at home, or implement management practises to reduce or prevent the incidence of the issue in future,” she said.

Using LDL data, Dr Weatherley used the slide below to illustrate the extent of hydatid infection across about 17,000 carcases from Queensland and NSW. It shows ‘hot-spot’ regions where treatment may be more necessary than others. The colour spectrum at the top of the slide shows the incidence as a percentage of cattle proportional to the number of carcases processed from that region. Dr Weatherley said the animal health data could also be tracked over time, to ascertain the cost and impact on a business, and benchmarked against other local or regional data.

“From a broader industry perspective, we’re going to be able to monitor any animal health issues that crop up, in a really timely manner, and how we can target support through extension and communication to help minimise the impact,” she said.

Information on a challenge like hydatids, for example, could also be useful in decision-making about wild dog control measures, as wild dogs are known carriers of hydatids.

“There’s lots happening in this reporting space, with many processors starting to see the benefits in working more closely with their suppliers, in provided really tailored feedback systems and generating some really great benefits,” Dr Weatherley said.

The Livestock Portal would help “unlock JBS’s data on cattle and put it in the hands of producers,” he said, potentially improving the quality and consistency of livestock supply.

“It will help drive productivity and performance improvements both on-farm, and at processing level,” he said.

He said JBS wanted to present the new data in a really simple format, that producers could easily absorb and respond to. 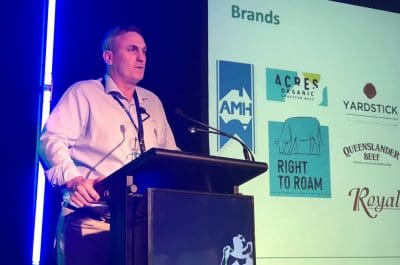 “Over the Beef 2021 week in Rocky, we have shown the model to countless producers – and they really liked the simplicity of it,” he said.

“It’s about using the portal to drive greater quality and consistency of supply, helping suppliers know when to harvest animals which best meet our brand specs. We think it will also improve our relationships with suppliers, and provide another channel to communicate with producers about what we are doing, and where (and how effectively) our product is selling.”

“But most importantly, it will help drive that productivity and performance right across the supply chain.”

Like most industry reporting systems, current JBS carcase feedback was ‘fairly basic,’ without a lot of real insights, providing a list of animals and how they graded against company and MSA specs.

“It’s the way it’s been done for 30 years, but it’s definitely time to change that up, making it more insightful about how those animals performed,” Mr Finucan said.

Processor grids tended to be complex, making it hard for producers to go through their feedback sheets to determine exactly what had impacted on carcases falling out of spec.

“We need to simplify that,” he said. “As part of the process we went through, we did a lot of producer engagement, asking them what they wanted and needed. They asked for historical performance; they wanted to be able to compare their own cattle against others from their region; and they wanted to understand how to improve.”

“They told us there was no point telling them they had a problem, without helping them understand how to fix the problem, and improve performance.”

This feedback was taken on board when JBS started building its new producer portal, Mr Finucan said.

Leaving ‘money on the table’

The company’s new Livestock Portal would include an historical supply summary and performance trends for each individual supplier to view privately; their performance against the grid, and company and MSA specifications; and allow benchmarking of that producer’s carcases against others from their region.

Importantly, JBS’s new Livestock Portal will also include a platform for each producer to review the opportunity cost and ‘money left on the table’ because of sub-optimal performance in any reported criteria – either animal health or carcase merit.

The platform will also show weather and seasonal impacts on supply and performance, and provide weblinks to useful information for corrective actions that may help improve performance.

Mr Finucan said JBS was using the Amazon Cloud to collect and process data, and apply machine learning and business analytics, then presented this back to producers in digestible form, via tablet or laptop screen.

Presenting a series of ‘example’ formats, he displayed slides showing historical performance from a representative individual supplier, over a period of 7-10 years. This could be broken-up into which plant they were consigned to; whether they were grass or grain; different types of cattle by weight or dentition; MSA or non-MSA; and different PICs of origin. The portal would also include a number of interactive features.

Another slide presented performance feedback and benchmarking results, using a simple ‘traffic light’ (red, amber, green) colour system to signal performance level on what was optimal, what was just missing-out, and what was a miss, on both company and MSA specs.

Calculations of missed revenue through non-compliance featured prominently. In one example shown, a consignment of cattle had total revenue of around $760,000, but an estimated $107,000 in value had been ‘left on the table.’

“The new portal is interactive, allowing producers to drill down to discover more about the ‘near misses’ and the ‘fails’, and what was driving it,” Mr Finucan said. “It could be a range of things – Is it seasonal? Is it animals that were bought in that weren’t quite up to spec? Is it the performance of the animals or a management problem?

Responding to seminar audience questions, he said it was clear from conversations with producers throughout Beef 2021 that they “really wanted to get access to the more comprehensive data.”

“The portal is only in a template format at this time, but the common response from producers was, when can I get in there and start having a look at what’s driving my performance?”

“It just opens up a deeper conversation between ourselves and our suppliers about what we are looking for, what they are supplying, and how we can all continue to get tighter in terms of delivering against specs.”