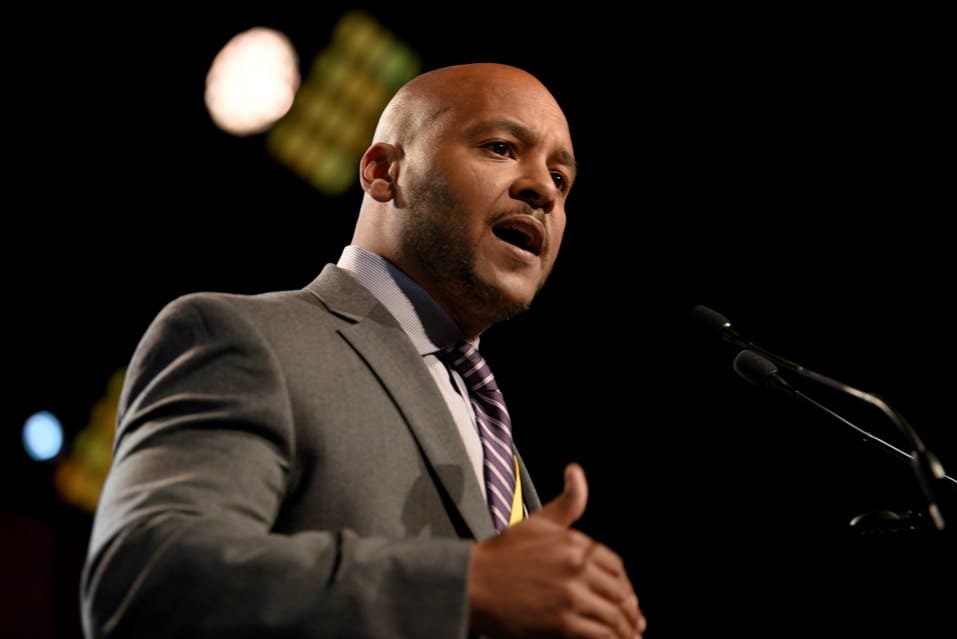 Cameron Bruett is head of corporate affairs with JBS USA, which includes the operations JBS Australia. He was a guest speaker at JBS’s Great Southern farm assured beef and lamb program’s conference and awards dinner in Melbourne earlier this month.

“Sustainability is not about process; it’s not about systems,” Mr Bruett said.

“It does not have anything to do with any one particular system – it does not matter whether you are grassfed or grainfed, or whether you use or don’t use hormonal growth promotants.

“Sustainability is really about improvement – about whether you are treating your animals well, treating your workers well, and marshalling your natural resources as efficiently as possible, in order to do more with less,” he said.

But red meat supply chains needed to embrace those values within agriculture more, and stand for something, Mr Bruett said.

“When attacked, we’re often in a defensive posture, when it comes to what we do and how we operate in the red meat industry. We have to take the bull by the horns, and become more aggressive in talking about what we do.”

“We have critics, everywhere, that are constantly attacking us in what we do. But one thing such critics will never do is feed anyone. The men and women in this room (JBS livestock suppliers, used as an example) are the ones who are going to feed the world,” he said.

“We have to be proud about that, and embrace it. We have to vigorously defend what is defensible, and go about doing our business each and every day. Let’s be mindful about how we market our products, and talk with pride about what we do, as much as about what we don’t do.”

Production agriculture needed to be a source of pride for everyone involved in the supply chain, he said.

Mr Bruett shared JBS’s view of sustainability with the Melbourne producer audience, which he described as ‘quite simple.’

“Sustainability is about doing more with less; being more efficient; and doing better today than you did yesterday, so you have the opportunity to improve tomorrow”

“Simply, it’s doing more with less; being more efficient; and doing better today than you did yesterday, so you have the opportunity to improve tomorrow.”

“Sustainability really is a journey of continuous improvement. It’s not a destination – it’s not about carrying out one intervention on a farm today and ultimately claiming that farm is sustainable. It’s about trying to do better, each and every day.” Mr Bruett said JBS tried to stay away from the ‘marketing BS’ when it came to sustainability.

“A lot of companies use ‘sustainability shorthand,’ talking about trying to save the planet. That’s not our approach; we try to be very simple, when it comes to the issue of sustainability,” he said.

But sustainability represented a unique opportunity for the red meat industry. Far too often, whether it be in Australia, the US or elsewhere, agriculture had been vilified over sustainability – attacked by some of those it was producing food for.

“Those in our industry work hard each and every day, getting up early in the morning to produce great quality, superior product – and then we’re attacked by some of those who benefit from that hard labour,” he said.

“Sustainability is one of those areas that empowers us, and enables us to share our story – to talk about how we treat our animals and the environment, and the good we are doing in our communities.

“Agriculturalists are the original stewards of the land, and we are often attacked by fringe non-government organisations about our sustainability. Yet those organisations themselves, from New York or the Netherlands, often with 30 years or less of history, will attack a multi-generational farm that has 150 years of history.”

“We, in agriculture, know sustainability better than anyone, and as agriculturalists, we need to be proud of what we are doing, and express that pride better. We’re not in the luxury automobile business or cigarette manufacturers – we are creating a basic necessity that each and every family around the globe needs at least three times every day to improve their lives and extend their wealth and success to the next generation.”

“We perform a basic necessity, of common good, for all society. But too often we are vilified for that. I say, enough.

Mr Bruett said sustainability was in fact a great way for the red meat industry to articulate its story to the broader community.

He used JBS Australia’s own Great Southern beef and lamb brands as an example of how a supply chain could leverage a suite of highly credible attributes, provenance, transparency and traceability to impart to the consumer the values that go into the products that the red meat industry produces.

“I believe farmers and ranchers are the salt of the earth, and the work we do is meaningful, and that we are actually contributing to a greater society. There are 6.5 to 7 billion people on planet earth today, and by 2050 that will grow to 9-10 billion. The only reason that is possible is that we have the ability to feed them. That population growth could not occur, if we did not have agriculturalists working hard each and every day to feed a growing, hungry planet.”

Mr Bruett said red meat brand programs, like JBS’s Great Southern, were an important part of bridging the gap in connecting the producer with the end-consumer. “Not with any BS or gimmicky marketing, but just sharing the values that we hold so dearly on-farm with others, transmitting that to the consumer so they can feel proud and confident about the products they already love and enjoy.”

However Mr Bruett issued a word of caution, because the red meat industry had a ‘lot of competition out there.’

“I feel like there is a certain guilt associated with the ‘free-from’ market. But we have to be cautious – it’s important to talk about what we do, as much as what we don’t do”

“It’s becoming quite common today to market the ‘free-from’ message in products to consumers. I feel like there is a certain guilt associated with the ‘free-from’ market. But we have to be cautious – it’s important to talk about what we do, as much as what we don’t do,” he said.

“The natural progression in the ‘free-from’ space leads to some of the food marketing I now see in the US, such as ‘GMO-free peanut butter’. The US does not grow genetically-modified peanuts, so such claims are just pure marketing,” he said.

“We don’t want the natural evolution of ‘free-from’ to become ‘free from beef’, because we know that people are working on creating flesh in laboratory petri-dishes, and plant-based proteins that mimic beef.”

“When I was growing up, the meat case had roast, steak and mince. Today, diversity of product in the meat case is unbelievable. This creates opportunities for all of us, and we should celebrate that diversity, absolutely. But we don’t want vilify our neighbours in doing it – I don’t believe in the meat case where one product claims to be more sustainable than another.”

Mr Bruett said he viewed sustainability almost like food safety. “When they go into a grocery store or supermarket, customers assume that all the products on the shelves are inherently safe – just because they are in the store.”

“I don’t want a situation to emerge where beef making ‘sustainable’ claims sits beside ‘generic’ beef in the chilled cabinet. I want all beef, and beef brands, to be recognised by consumers as sustainable, because it is produced by farmers and ranchers who care about their land, care about their animals, and care about the products they are producing. That should be our end-goal – the rising tide lifting all of our boats.”

“But let’s celebrate the diversity in products that is happening in red meat, because there is a real sustainability challenge in front of us: it’s estimated that by 2050 there will be three billion more people on earth – that’s two Chinas.

“When more people in developing economies graduate to the middle class they tend to increase their protein consumption, so we’re going to need more high-quality, well produced sustainable protein.

“But we’re in the right industry, at the right time. It’s an exciting time to be in agriculture. In the US, the economy is booming – hotels and grocery stores are full, and demand for our products (including Australian beef and lamb) is through the roof.

“There are tremendous opportunities there for all of us, but we cannot get caught up in what the critics say. Ignore them – they are inconsequential. What we are doing in feeding the world is an honourable mission, and we should all be blessed and pleased to be a part of that,” he said.

* Cameron Bruett is head of corporate affairs with JBS USA, the North American, European and Australian arm of JBS, including the beef, pork,lamb  and prepared foods operations in Australia. Prior to joining JBS a decade ago he spent 15 years in Washington DC dealing with agricultural policy, trade issues, food safety livestock and dairy policy. Today he works in JBS USA’s corporate team out of Greeley, Colorado, working on government relations, internal and external communications, corporate strategy, sustainability and industry affairs. He is also past president of, and JBS’s current representative on, the Global Roundtable for Sustainable Beef.