Be alert, not alarmed over FMD/LSD threats, urges RMAC chair

AUSTRALIAN livestock producers should be ‘alert, but not alarmed’ over the looming threat of Foot & Mouth Disease and/or Lumpy Skin Disease, but all should consider developing a comprehensive biosecurity plan, Red Meat Advisory Council chair John McKillop told a Brisbane gathering on Friday.

Speaking to the Queensland Rural Press Club, Mr McKillop provided a sobering account of the growing potential risk and financial impact from an LSD/FMD incursion out of Indonesia. 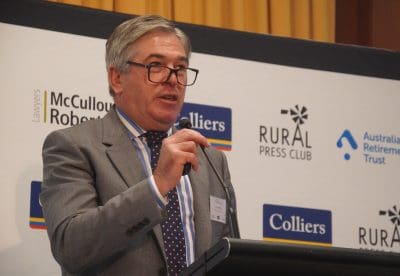 He said as an industry, it was important to keep an eye out for any symptoms of either disease (see details at base of page).

“We need to be aware, and have all our protocols in place. There’s lots of work to be done, both at the national level, but also at individual farm level – everyone will need to have a plan in place, if the worst case happens,” he said.

“If it doesn’t happen, we’ll all be happy – but we don’t want to sit and wait until one of the diseases arrives before we do something about it.”

Mr McKillop said a priority over the next 12 months would obviously be to strengthen Australia’s biosecurity preparedness.

“It has to happen, and we want Federal funding for that to be set in place and continued – rather than each round of funding coming up every three years. We need a set amount of funding, and we need to be able to build that into a pool that we can draw upon, on 24 hours’ notice.

“At the moment the funds could flow fairly quickly, but the reality is we have to go to government and ask them to release funds if either disease is detected, so that we can activate our plan within 24 hours.”

“If we don’t, it will cost the Australian economy billions of dollars,” he warned.

Mr McKillop described LSD as probably the biggest threat the Australian meat and livestock industries had faced for some time.

“Some people have concluded that LSD would be a northern pastoral issue confined to bos indicus type cattle. It’s not: it affects bos Taurus cattle more than indicus, and would affect the dairy industry as well, if it came into Australia.

“It has no human health implications, but the reason I am concerned about LSD more than FMD is because it is vector borne – spread by bromites and mosquitoes. It means one good windstorm could transport it from Indonesia to Papua New Guinea, and another from there into northern Australia.

“It can spread easily, and has spread very quickly across Indonesia,” Mr McKillop said.

“It’s having a devastating affect, because there is no vaccine for it in Australia at the moment. Most of the vaccines are coming out of Africa, which come with a risk of bluetongue, FMD and other diseases.”

Mr McKillop said the way Australia’s export protocols are currently written, we would overnight lose 65 percent of our export beef markets if LSD was detected here, and 93pc of our markets, by value, in the live export trade.

“And in the boxed beef trade, it gets worse – being applied retrospectively back 72 days, which is two and a half times the incubation period. It means we could have meat on the wharf in America or in Japan, that was processed two months earlier, that would have to be recalled or destroyed.”

“The impact of that would be phenomenal in Australia.”

Mr McKillop said the existing protocols were probably written many years ago when people did not necessarily consider LSD a major potential issue.

“But it’s now coming home. It’s potentially a really big issue, that we need to focus on, hard,” he told the audience.

He said the federal government’s Centre of Excellence for Biosecurity Risk Analysis had raised the probability of Australia getting LSD from 8pc two months ago to 28pc today – within a range from 4pc to 56pc probability that Australia will suffer an outbreak at some point.

“Some in the department say in the next 12 months an outbreak is unlikely to happen, but over the next 36 months, it’s probable it will happen,” he said.

“If those numbers bear-out to be right, we have between 12 and 36 months to get our act together, and do everything we can to prevent this or mitigate the impacts, should it arrive.”

“But don’t be negative,” he urged. “Everyone in the industry should be alert, but not alarmed. But as an industry we need to move on this quickly, and make sure we are pressuring government to do everything it can.”

“And I have to say, so far, they (government) have been very good.”

So what is the industry and government doing about it?

An LSD task-force has been formed, involving Red Meat Advisory Council and its stakeholders, National Farmers Federation, the dairy industry, and the Federal Department of Agriculture and Water.

“This comes under the crisis management part of RMAC’s role,” Mr McKillop said.

“It’s very much a steering committee – we don’t write policy or issue press releases. But underneath the task force is an entire structure, determining how we interact with governments (both federal and state), and the various industries.

A whole lot of the disease response would need to be controlled at the state level, in the event of an incursion, Mr McKillop said.

Within the over-arching task force were five working groups, each chaired by somebody on the overall task force.

Moving to Foot & Mouth Disease, Mr McKillop said FMD had now taken over in Indonesia, in terms of where attention was being focussed.

“We have not had one report from the Indonesia Government on LSD in the past six weeks, since FMD was discovered. They are not thinking about it (LSD), and have moved on,” he said.

“If Australia got FMD it also would be devastating, because it’s not just cattle, it’s sheep and pigs, and it’s a tough one to get rid of – as evidenced by what happened in the UK.”

“But it’s not as transmittable as Lumpy Skin Disease. It requires close contact or soil to move it. There’s been talk last week about banning flights out of Bali, as a means of limiting FMD spread, but I just cannot see a government willing to move into that area.”

“In comparison LSD can move hundreds of kilometres in a night, through an insect vector. But its just not on the radar of the Indonesians at the moment, which is quite scary.”

“With FMD, it was now on four main islands of Indonesia, and spreading quickly.

Australia had a bank of vaccine and the raw material that goes into the production of FMD vaccine in the UK, Mr McKillop said.

“At the moment we can draw down on that, and in fact give it to Indonesia if we wanted to. But the downside is it takes four months to make another batch. If we gave our current supply to Indonesia, it would take another four months before we could start vaccinating in Australia, in the event of an FMD outbreak.

“It does come with some risk, but it’s come to the point where we just have to get on with it. If it costs a few hundred million dollars, that’s not a lot of money, given the size of the downside if we don’t do it.”

Who should pay for vaccination in Australia?

During questiontime,  Beef Central asked who should pay for any potential vaccination program in Australia’s beef herd, and whether the Federal Government had a socialised responsibility to provide finance in the event of an FMD of LSD incursion.

Mr McKillop said LSD was considered a lower risk disease (by government) and therefore did would not attract federal funding. However FMD carried a higher rating, which would automatically trigger government funding in the event of an outbreak.

“One of the issues we are trying to pursue is to get LSD raised up that priority list, so it is more recognised and does attract government funding.”

He said 85,000 doses of vaccine had already been sent to Indonesia, with another 350,000 doses in the pipeline.

Asked whether the defining period for Australia’s use of NLIS would emerge in the event of a disease incursion, and whether there was more that needed to be done in that space, Mr McKillop described NLIS as an ‘insurance policy.’

“I have life insurance, but never once have I regretted not claiming on it,” he said.

“That’s the way we have to look at it. Its costly and everything else, but if we get either or both of these diseases in, then nobody is going to be saying, I wish we didn’t have NLIS.”

But there were deficiencies.

“Particularly for FMD, we don’t have mandatory national electronic tags for sheep. It’s beyond me, when lambs are making $200 a head, that people aren’t prepared to put a $2 button in its ear, because it’s only going to be around for six months. If we get FMD, the sheep industry will be the first to think, I wish we’d done that some time ago. There’s more we need to do.”

“We need to make sure the systems are robust – we all know that tags fall out, and we do need to do more to make sure the tags stay put and the database is absolutely working the way it is designed to work.”

A producer in the audience asked how imminent a threat would have to be from disease before producers became involved in a vaccination program.

“If you are talking FMD and LSD, the issue is in using vaccines which rely on live viruses, you are then deemed to have the disease. If you went out there prophylactically, vaccinating, then all of those export ban protocols kick in.

“We need to work on those protocols first. Obviously once we had the disease, we’ve lost them anyway, so the industry would just go and vaccinate as widely as it could. But at the moment we can’t, because we cannot legally bring FMD into Australia.

“There is nothing any of us can do at this stage, other than be alert, and start preparing biosecurity measures and plans.”

Asked what big pastoral players were doing to prepare for FMD/LSD risk, Mr McKillop said at his own company Hancock Pastoral, which he manages for Gina Rinehart, it had already started to look at how it might implement a biosecurity plan. Consolidated Pastoral Co and others were also well down the same path.

“People are going, we need to get on the front foot,” he said.

“CPC, for example, in its Indonesian feedlots, is spraying around their yard facilities every day to remove mosquitoes and bromites out of that system, to keep the vectors at bay. In Australia, it is a matter of preparing, rather than doing anything practical at this stage.”

Find out more about Foot and Mouth Disease and Lumpy Skin Disease here: