THE Australian Government has confirmed recent speculation by formally joining over 120 other countries in pledging to reduce methane emissions by 30pc below 2020 levels by 2030 across the energy and resources, agriculture and waste sectors. 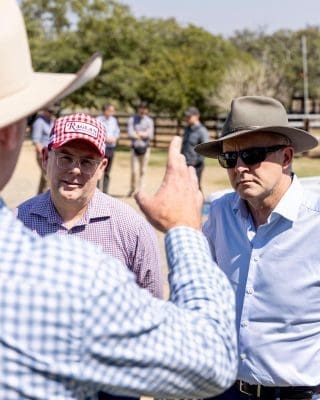 The Global Methane Pledge is a voluntary commitment with 122 signatories including the United States, United Kingdom and the European Union.

Signatories to the non-binding pledge commit to taking a range of domestic actions such as standards for reducing emissions in the energy and waste sectors, and seeking abatement opportunities in the agricultural sector through technology and partnerships with farmers.

Minister for Climate Change and Energy Chris Bowen said the Pledge promotes an “aspirational global target” for countries to work together to reduce global methane emissions.

“By joining the Pledge, Australia will join the rest of the world’s major agricultural commodity exporters including the United States, Brazil, and Indonesia in identifying opportunities to reduce emissions in this hard-to-abate sector.”

Australian Government investment will include up to $3 billion from the $15 billion National Reconstruction Fund to support investment in, for example, low emissions technologies and component manufacturing and agricultural methane reduction.

Under the Powering Australia plan, the Government has also committed $8 million for the seaweed industry to support commercialisation of the low-emissions livestock feed supplement Asparagopsis.

The second stage of the Methane Emissions Reduction in Livestock (MERiL) Program will provide $5 million in funding to develop technologies to deliver low emission feed supplements to grazing animals and determine their technical viability and commercial potential.

“The Pledge does not require Australia to focus solely on agriculture, or reduce agricultural production or livestock numbers,” Mr Bowen said.

He also specified that as a result of signing the Pledge, the Australian Government will not legislate or introduce taxes or levies to reduce livestock emissions.

The pledge has received support from the industry’s peak bodies including the National Farmers Federation, Red Meat Advisory Council and Cattle Council of Australia. But the approach to livestock methane has been causing some concern in recent times, with a CSIRO scientist last week calling for a re-think of the way it is measured.

“It’s worrying that the pledge is only regarding absolute emissions, and totally fails to recognise the cyclical manner of livestock emissions,” he said in a tweet.

The livestock sector has already achieved much to reduce emissions- see CN30. It’s worrying that the pledge is only regarding absolute emissions, & totally fails to recognise the cyclical manner of livestock emissions

Mr Coffey was referring to the use of the GWP 100 (global warming potential) metric, which is used to measure all gases, including methane. Scientists have long argued there are better ways of measuring livestock methane, with GWP star being the highest profile metric for livestock.

When asked whether the government would consider adding measurements GWP star to Australia’s official account,  a spokesperson for Mr Bowen said: “Australia is required to use the GWP-100 metric for reporting under the Paris Agreement. The GWP star method is not currently recognised in international inventory reporting rules.”

Beef Central asked Mr Bowen if the government was considering it as additional information and we are expecting a response soon.

Australian agricultural industry leaders have been supportive of the move:

“Farmers are already leading the charge on climate action in Australia and have earned a seat at the table and the strong assurances and partnership provided by government mean the pledge will not negatively impact on farmers or the agriculture sector.”

Cattle Council of Australia CEO John McGoverne said: “We are supportive of the Commonwealth signing up to the pledge, provided there are no new taxes or reduction of herd numbers.

“Millions in cattle levies have been invested in new feed additives that significantly reduce methane emissions including asparagopsis, or pink seaweed, which can cut emissions by more than 90%.

“These kinds of technologies will encourage producers to get involved and they should be rewarded for their effort.”

Red Meat Advisory Council CEO Alastair James said: “Industry quite some time ago set itself its own target because sustainability of the red meat and livestock industry is key.

“We’ve committed to reaching carbon neutrality by 2030 and we are a long way down that track, we have already reached just shy of 59 per cent of the way there.

“So we’re very, very comfortable with the approach that the industry is taking in achieving that goal.”

Australian dairy farmers have come out against the pledge, saying it is too early to make such a goal, particularly with the focus on seaweed. Australian Dairy Farmers (ADF) president, Rick Gladigau said the industry was still trying to work out how to use the supplements.

“Other measures, particularly the use of feed additives to reduce enteric methane from livestock, are still in development, with trials and tests underway around the world to establish both the actual methane reduction potential, as well as the delivery mechanism for the cows in pasture-based dairy farming systems,” Mr Gladigau said.

“All the technologies being used by dairy are promising but they will have limitations on their ability to reduce methane emissions from cows in dairy production systems. In addition, implementing these interventions will take time, focus and, most importantly, investment that must be considered in any future policy setting.”

Reforms to the Safeguard Mechanism will support emissions reductions in the industrial sector, including reductions of methane emissions from industrial and resource activities, helping to ensure Australian businesses can remain competitive as the world decarbonises.

The Global Methane Pledge is based on data from the United Nations Environment Programme Global Methane Assessment. That report highlights the critical role that cutting methane emissions plays in the slowing the rate of global warming.

Methane is a highly potent greenhouse gas that absorbs heat 84 times faster than carbon dioxide over a 20-year period.

Agriculture Minister Murray Watt said the announcement is a non-binding goal that is already accepted by over 120 countries, including some of the biggest beef producing countries in the world.

“By signing the pledge, we are putting Australia’s ag sector on a level playing field with our trade competitors.

“Increasingly our trading partners are wanting to do deals with countries that demonstrate a stronger commitment to sustainability.

“By investing in new technologies such as feed supplements, the industry can remain internationally competitive.

“Today’s signing shows our trade partners we can still produce the best food in the world, all while being environmentally responsible.”

The Federal Government has today confirmed that Australia’s red meat and livestock industry will not be negatively impacted by its decision to sign Australia up to the Global Methane Pledge.

As part of this promise the government has ruled out introducing a methane tax or any other punitive measures or regulation that could harm the red meat industry or lead to a reduction in livestock numbers. The government has also confirmed it will be a non-binding target that will complement and support industry’s existing plans to be carbon neutral by 2030 (CN30).

“Over recent weeks the red meat and livestock industry has sought urgent assurances from the Federal Government that our sector would not be unfairly impacted by the global methane pledge,” John McKillop, the Independent Chair of the Red Meat Advisory Council said.

“Today’s announcement shows the government has listened to our concerns and recognises the Australian red meat and livestock industry is proactively addressing emissions and is well advanced in achieving its CN30 target. Industry’s net emissions have reduced by almost 60% since 2005, representing by far the greatest reduction by any sector of Australia’s economy.”

“With the right policy settings and ongoing research investment, our industry can be at the forefront of the climate solution.”

“Most of the red meat industry’s reductions to date have been via carbon storage in vegetation and increased efficiency. It is expected that much of the remaining net emissions reductions will be reductions in methane, which requires ongoing investment in research, development and adoption.”

“The government can continue to help the red meat industry reduce methane emissions by funding activities aimed at fast-tracking commercialisation of methane reducing feed additives, helping producers commence emissions accounting for their farm businesses and development of emissions reduction fund methodologies and other incentives for adoption of novel feed additives, and future innovations.”

“It’s important to remember that methane emitted by ruminants like cattle, sheep and goats is recycled into carbon in plants and soil, a process known as the biogenic carbon cycle, and does not contribute additional net inputs to the environment, unlike other emission sources.

“Our sector is at the forefront of delivering a science-based plan to reach carbon neutrality by 2030 without compromising productivity or livestock numbers,” said Mr McKillop.

To learn more about the environmental impact of livestock methane in the natural carbon cycle, watch this animation: https://www.youtube.com/watch?v=VLmpC-VZoD8

Farmers for Climate Action group released the following statement in support of the pledge:

Farmers for Climate Action, an organisation representing more than 7000 farmers across Australia, welcomes Australia signing on to the Global Methane Pledge.

CEO Dr Fiona Davis said farmers would benefit from Australia and the world signing on to the pledge. “Farmers are being slammed by climate-driven flooding right now, and methane accelerates climate change,” Dr Davis said.

“Claims that signing the methane pledge threatens farming need to be called out. Farmers deserve the security of a safe and stable climate in which to grow our food.

“Farm methane has been dropping while methane from the gas industry has been rising.

“Reductions in methane should come from the gas and oil industry. The Federal Government has assured us on key points, namely:

“This is a sensible policy, and we note 122 other countries have already signed on to the pledge including huge farming nations such as the US, New Zealand, Brazil, the EU and Canada.

“Farmers across Australia, and particularly in the beef and pork sectors, are leading the way on emissions reduction and research into reducing methane. We look forward to more Federal Government assistance in developing technology in this area, such as asparagopsis feeds.”

“The gas industry needs to be asked to tighten their belts rather than the mum and dad farmers who are already doing enormous sequestering of carbon, through tree planting and rotational grazing and planting of mixed pasture species which are of enormous benefit and cut emissions,” Mr O’Connor said.

“Climate change is a massive threat to agriculture and methane from livestock is an issue, but we are addressing that issue. There are some great results coming from trials of feeding asparagopsis to cattle and other additives so there will be solutions very soon. I’m concerned that fossil fuels, particularly the gas industry, is using this issue to try and drag the chain on methane reduction,” Mr McCreath said.