Australian cattle now officially the most expensive in the world AUSTRALIAN slaughter cattle are now officially the most expensive among major beef exporting countries in the world.

The difference between US and Australian cattle prices narrowed to virtually zero in this article published on Beef Central a few months ago, but the transition is now official.

Australian cattle prices have only rarely topped equivalent prices in the US in A$ terms in the past ten years, last occurring briefly during 2016, when Australian producers were intent on rebuilding cattle herds, at a time when international beef demand was on the rise. At the same time, US cattle prices were being pushed lower by drought turnoff.

While near-record high cattle prices in Australia this year have been fuelled by the overall livestock supply shortage caused by herd reductions after two years of drought, other influences are also at play.

The big decline seen in US cattle prices in recent months (captured in the graph) has clearly been a factor.

“We saw US livestock prices really fall off a cliff, while wholesale meat prices went in the opposite direction during COVID,” MLA analyst Adam Cheetham told Beef Central. “In fact the re-positioning in global beef prices is as much to do with lower US and South American cattle prices, as it is about price rises in Australia,” he said.

Fed cattle prices in the US since late June have averaged the lowest since 2010, Steiner’s Daily Livestock Report said overnight. 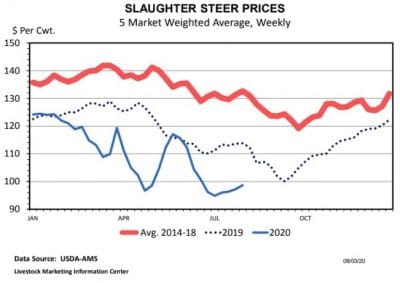 The five-area weighted average put the US live steer price this week at US$96.57/cwt (2020 trend indicated in blue line in this graph), down from about US$112/cwt this time last year (dotted line), and about US$130/cwt averaged over the previous 2014-18 period (red line).

A surplus of US fed cattle supplies has emerged, following the back-up in slaughter cattle that occurred during mass US processing plant closures due to COVID in May and June. This has pushed US cattle prices sharply lower, and the price trend was likely to continue through at least August and September, DLR reported.

Currency movement has been another factor in Australia’s elevation as home to the world’s most expensive slaughter cattle. After dropping to US55c briefly back in April following the onset of COVID and the strengthening in the US$, the Aussie dollar is currently trending higher – trading at US71.8c this morning. That’s up about 6c since early May.

“I don’t think we would have anticipated that appreciation happening back when the value dropped so severely in April,” Mr Cheetham said. “The recent currency movements aren’t doing Australian export processors any favours – that’s for sure,” he said.

The fact that international beef demand was currently subdued did not help, when livestock price and currency value were so high. The cattle price effect was perhaps less significant during periods of high customer demand, Mr Cheetham said.

“It’s a challenge, but we also have to look at the positives – the fact that livestock prices are so strong clearly signals the improvements in domestic conditions. Counter to trends in all previous droughts in Australia, strong international beef demand, led by China’s African Swine Fever outbreak, kept cattle prices very buoyant over the past two years of drought sell-off. We have really come off a high base,” he said.

Mr Cheetham said there was no question that slaughter cattle supply would be extremely tight for the next few months, which would continue to offer support to cattle prices. Uncertainly surrounding demand caused by COVID would create its own pressure, but this was hard to predict.

With the supply of slaughter-ready cattle becoming increasingly constricted as the year has progressed, processors have maintained strong price grids, while the tight availability of slaughter cattle at saleyards has also underpinned robust prices.

The NLRS national heavy steer indicator today sits at 364c/kg liveweight, up from 350c/kg a week ago, and 16pc higher than the 312c/kg seen this time last year.

Global conditions are yet to override the improved domestic market when looking at the impact on domestic prices.

However Australia now faces a cattle market out-of-sync with key competitors and with a global recession on the horizon, MLA warned in its recent mid-year projections.

Any assessment of the likely trend in finished cattle prices needed to balance the negative impact of COVID-19 across markets and channels and the potential for increased competitor pressure, against tighter Australian supplies and the ongoing protein deficit created by African Swine Fever.

Together, these factors create an uncertain, evolving and challenging scenario, MLA said.