THE Australian national meat judging team, currently in the US on a month-long study and competition tour of the North American meat industry, has finished third overall at the recent National Western Stock Show competition in Denver, Colorado. 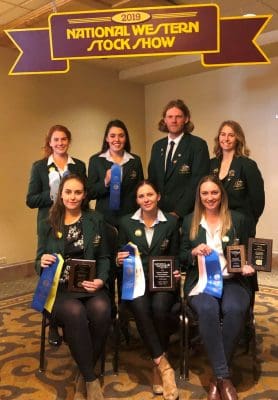 The competition was a part of a month-long annual student tour of the US industry coordinated by the Intercollegiate Meat Judging Association and is sponsored by Meat & Livestock Australia and the Australian Meat Processors Corporation.

It is the fourth year running that the Australians have taken out champion team for lamb judging.

Team coach Nick van den Berg said that in addition to judging beef, lamb and pork carcases and primals, students also had to learn the USDA grading system to participate in the competition.

“It’s a challenging learning concept in such a short time and takes a great deal of focus and dedication. They all be can very proud of their achievements, learning a whole new grading and value based pricing system in under two weeks,” Mr van den Berg said.

Team member Felicity Brumpton, who also runs a Merino stud in Mitchell, QLD, was excited to represent Australia in such a prestigious competition.

“It has been challenging learning the USDA grading system in a short time, but we have had some excellent training and plant visits that has made the experience fun and competitive,” she said.

“It was very exciting to have a win at the contest, particularly up against American teams in the US. It has also been fun meeting other students and making some really valuable contacts throughout the US.”

Coach Sarah Stewart said the aim of ICMJ was to build careers and inspire future professionals in the meat industry.

“Meat judging programs and the ICMJ US industry tour accelerates student development and gives them the skills, confidence and professional networks to enter into a career within the industry. In this way we can help grow industry leadership capacity,” Dr Stewart said.

For team mates Lauren Smith and Nikita Ellison, the competition highlighted the volume of young people that are passionate about the industry and the networking opportunities that are available.

“It was truly inspiring to see what young people are able to achieve in the sector. For me it really highlighted the opportunities that are available if you have the ambition and passion to grab them” Ms Ellison said.

“The trip has been an incredible networking opportunity with people from all across the industry and the US. It has also been awesome meeting students from across the US and forming friendships with the next gen of agricultural leaders” Ms Smith said.

The National Western Stock Show culminates the training and competitive component of the month-long US industry tour. The team will now focus on visiting a broad cross-section of the US meat industry, including seedstock and cow calf producers, lotfeeders, universities, processors and retailers.

The 30th Anniversary of the Australian ICMJ Association will be celebrated at the annual ICMJ conference and competition in Wagga Wagga in July, which will host 150 tertiary students from Australian and international universities.

ICMJ extends it reach to industry by also coordinating a range of high school competitions, running a Japan industry tour, and a week-long industry development program for its top 20 future leaders from which it selects the Australian team. For the first time in 2019, ICMJ will also hold a Northern conference in Rockhampton, focusing on the northern beef sector.