Mr King has led AusMeat’s operations almost since the body’s inception, having left the New Zealand meat processing industry to become its second chief executive officer back in 1992. 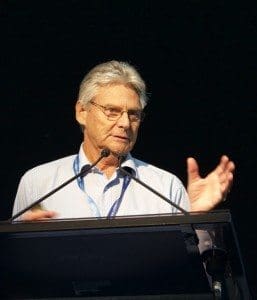 AusMeat chairman Allan Bloxsom said Mr King’s retirement would mark the end of an era – not only for AusMeat, but for Australian food industries in general, particularly the red meat industry.

“Since he joined AusMeat almost 30 years ago, Mr King’s leadership, clear thinking and dedication has been admired by all those he has worked with in Australia and around the world. We are very thankful for what he has done,” Mr Bloxsom said.

“His ability to maintain the right relationships with industry and government, and his vigilant protection of AusMeat’s mission has resulted in worldwide admiration for the organisation and the AusMeat Language, and an era of unmatched trust in the integrity of the processes that deliver food from the farm to the consumer,” he said.

“Ian has much to be proud of, and it will be a tall order for us to find his replacement.”

Mr. Bloxsom said the board would now commence recruitment for a new chief executive officer.

“With the help of independent consultants, we are mounting an extensive search and recruitment campaign. In addition, Ian has generously agreed to stay on and help bring the new CEO up to speed. We believe it will take about six months to find the right person and transition them into the AusMeat role,” he said.

AusMeat Ltd is an industry-owned company set up in 1998 as part of a major restructure of Australia’s red meat industry bodies. The business is a joint venture limited by guarantee between the Australian Meat Processor Corporation and Meat & Livestock Australia under a Memorandum of Understanding with the Australian Department of Agriculture and Water Resources.

The principal objectives of the business are: