AUSTRALIA’S online livestock marketing platform, AuctionsPlus has recorded exponential growth in turnover during the past few months, and the latest COVID-19 constraints around gatherings of people, leading to saleyard closures and strict yards operating conditions, have only intensified that trend.

As this graph illustrates, offerings on AuctionsPlus have shot to unprecedented levels over the past three months. Last week saw listings top 30,613 head, a dramatic 25 percent rise on the previous record set only a few weeks earlier. This week’s listings remain historically high, at around 27,000 head. 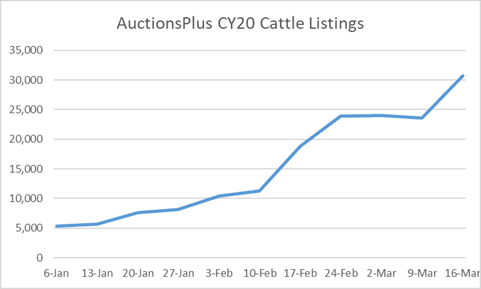 While much of the story behind the online platform’s recent growth is related to the pent-up market demand and price rises since February’s big rain event, the past two weeks has added another, new factor to the equation: COVID-19.

With restrictions on attendance at store sales, social distancing and some Victorian cattle sales being cancelled this week, AuctionsPlus’s potential future role has swung sharply into focus.

In what has been an incredibly rapidly moving space, some people continue to speculate about how extreme COVID-19 restrictions may yet become, on how the beef industry supply chain operates.

That applies as much to property auctions, as it does to livestock – a topic to be explored in next Tuesday’s weekly property review. 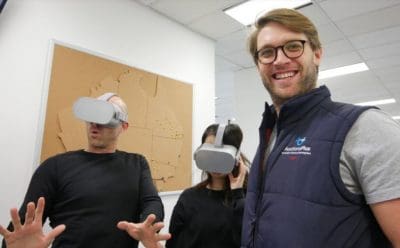 The inquiries have been both about online-only sales, as well as interfaced online bidding with physical sales.

“The two announcements from Prime Minister Morrison really started to shake the tree, and subsequent developments this week have only added to that,” Mr Street said.

It’s not at all uncommon for AuctionsPlus to show a spike in turnover during times of high demand and rapidly rising prices, as vendors seek to broaden the buying pool as much as possible. The same trend was clearly seen in 2016 during a period of short supply.

Past history also suggests that after a significant spike in turnover is seen, a new baseline is set, as more stakeholders – both buyers and vendors – become more familiar with online livestock trading.

Since the beginning of 2019, for example there has been a 38 percent increase in the number of vendors engaged with AuctionsPlus, and that statistic closely aligns with the number of bidders, also.

Mr Street said inquiry over the past week had been both for online-only cattle sale listings, as well as interfaced physical sales, where buyer numbers were now being restricted.

“It’s heartbreaking for those southern selling centres that have cancelled store and breeder sales this week, but fortunately the agents involved are often accredited AuctionsPlus assessors, so it is an easy transfer across. The industry is fortunate in that there is a platform out there that can meet its needs during the current crisis,” he said.

Can the system handle much larger numbers?

So is the AuctionsPlus platform up to a dramatic increase in cattle numbers?

From a platform or operating standpoint, there was no real physical limit to how many lots can be offered, Beef Central was told. However, the current COVID-19 crisis is causing a diversion of resources and band-width capability of communications networks, which is impacting the time it takes some buyers to connect to large auctions.

The real discussion-point that AuctionsPlus management and industry is focused on at present is around simplifying and streamlining the listing process, while still giving all buyers the confidence to participate, ‘sight unseen.’

“We do that now, through the full AuctionsPlus assessment,” Mr Street said. “But we also understand the restrictions and challenges associated with the sheer volumes of livestock going through physical saleyards – often in small lots.”

Meetings this week with industry stakeholders have looked at possible solutions for that.

Some parts of this are still work in progress, but AuctionsPlus has already initiated some changes, in order to manage larger numbers.

For example, in addition to the current regular Friday weekly Eastern States sale (mostly breeding cattle), and Weaner & Yearling Sale, Auctions Plus from next Wednesday will launch a weekly mid-week sale. The larger numbers will also be distributed over multiple smaller individual sales, in order to spread the buyer connection requirements for s seamless auction experience.

Are cattle getting ‘lost’ in such large catalogues?

Given that the platform currently has upwards of 25,000 cattle offered a week for the past month, and growing, a mid-week sale would help to smooth out the flow, and ensure that no listed cattle get ‘overlooked’ within enormous catalogues, Mr Street said.

“From an efficiency point of view, we listed 30,000 cattle last week, and sold them all within two hours,” he said.

Asked if there was a risk of entries getting ‘lost’ in such large catalogues, Mr Street said he was confident this was not the case, but AuctionsPlus had been working to continually improve its user search functionality, with new filters and ‘favourites’ features, to ensure that bidders could find the specific cattle they were looking for.

“There are features now on the platform that will ensure that lots aren’t ‘lost.’ But for anybody who might be concerned about that, the new Wednesday sale means there is another avenue there to spread numbers out over the week.”

“We obviously need to add value to both the selling agents and their vendors involved in physical sales, as well as the buyers – both lotfeeders and potentially, meat processors,” Mr Street said.

“Their currency in trade in physical sales is relationships and visual assessment. That visual assessment in the saleyard gives them the confidence to bid. If, for any reason, meat buyers are in future restricted from attending saleyards, there needs to be another currency of trade – and that is one of the issues we are currently trying to address.”

AuctionsPlus up to this point has been overwhelmingly supported by feedlot, backgrounder and restocker-type buyers, with very little active support shown by processors. Is that about to change?

“Three days ago, I would have still said no,” Mr Street said. “But the future under COVID-19 remain really unknown, and anything is possible. Most of the large meat companies and their commission buyers now have very clear instructions surrounding safety and responsibility – avoiding putting them in a situation where they feel uncomfortable.”

“But from our perspective, saleyards remain a critical avenue to sell livestock in Australia. They have already done a great job in trying to manage COVID-19 risk, and we are not suggesting that AuctionsPlus is some kind of blanket ‘silver bullet’ to replace saleyards, outright.

“But for cattle that continue to get sold through a physical sale, it may play a stronger role in putting buyers and vendors together, via online bidding, where there are a lot fewer people present at the yards.”

Mr Street said it was store and breeder sales which tended to attract much larger audiences.

“For prime cattle sales in yards, buyer numbers tend to be much less, and can be more easily controlled. The immediate pressure-point is those store and breeders sales, and how best to allow restockers, backgrounders and lotfeeders to effectively access stock. That’s where we think AuctionsPlus’s sweet-spot is in coming months.”

“Without that, we are not going to get bidding activity – it’s as simple as that,” he said.

“We believe the information that is currently captured as part of a listing assessment allows the vendor the best opportunity to get the price they want.”

Despite current market conditions and challenges, he said there was no prospect, at this stage, that AuctionsPlus would allow vendor self-assessment of stock, even for a temporary period.

However AuctionsPlus will shortly launch a digital offline assessment app for accredited third-party assessors, which would speed up the data capture, assessment and data input process. That tool is expected to be in the market within a month.

AuctionsPlus is also working with other agtech companies in the market to come up with a saleyard assessment solution, to support interfaced, physical prime cattle sales. Specific criteria were still being considered, but there was a prospect it might be a ‘pared-down’ version of the conventional AuctionsPlus assessment.

“The information a processor buyer is looking for, to make a purchase, is not necessarily the same as a store or restocker buyer, for example,” Mr Street said.

“We’re working with industry to define what those characteristics and fields are – but within all this, we are determined not to compromise buyer protection,” he said.

Asked whether AuctionsPlus ran the risk of literally ‘running out’ of assessors due to demand, he said there were currently more than 1000 accredited assessors nationally, of which around 800 or 900 were active.

“From a logistics viewpoint, we’re confident that there are enough assessors to go around, based on possible future demand,” he said. “But that’s subject to the longevity and eventual depth of this crisis. In parallel, we are currently examining how we might be able to further digitise our assessor training courses.”

“For us, what’s paramount is the integrity and trust in the online system, and there won’t be any hasty or slap-dash accreditation of new assessors, just to meet future listing demand. Burt we also realise that the industry is hurting, and looking for solutions.”